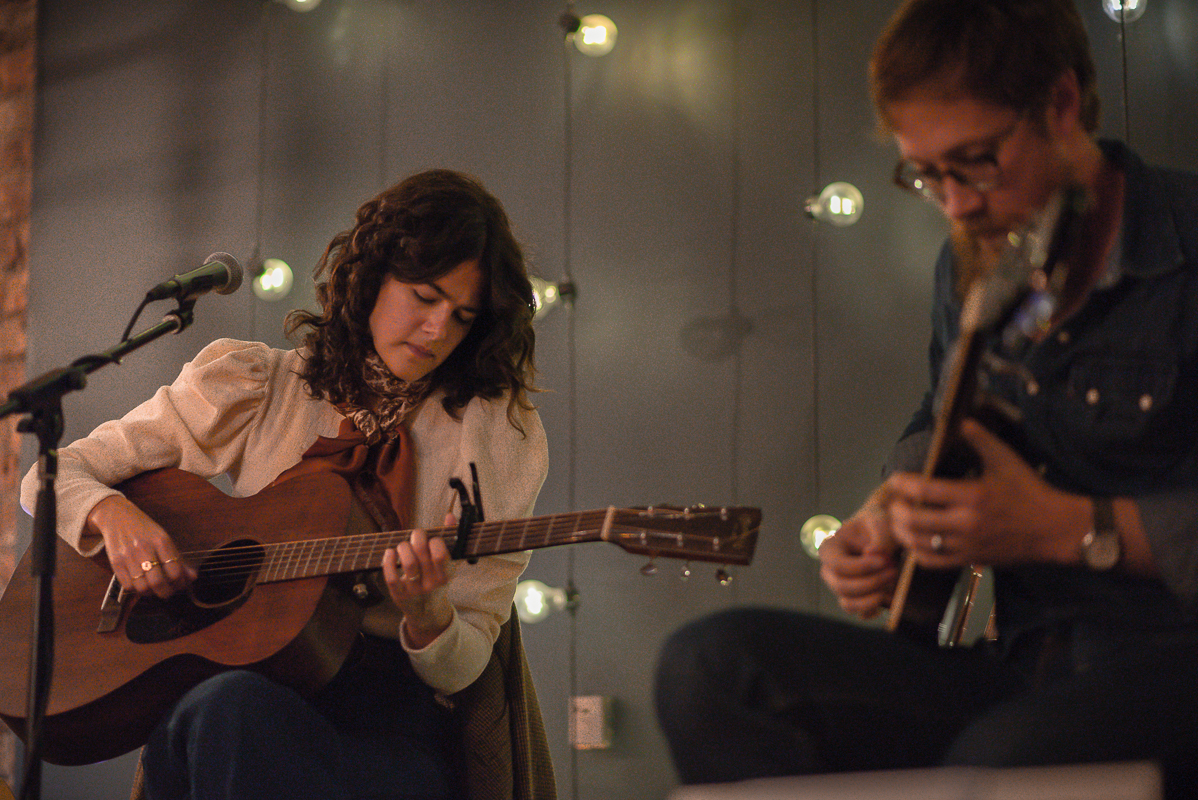 Native Harrow brought her wistful, watercolour folk soul songs to Leaf  Getintothis’ Paul Fitzgerald was there to witness the dreamy elegance of it all.

Until recently, very recently – like, a week ago – we’d never heard of Native Harrow.

It didn’t take long though, once the email had landed inviting us down to Leaf, for us to jump at the chance. One listen to the new album, Happier Now, was all the invitation we needed.

We were keen, so we arrived early. 7.45 on the dot, so we could catch any support acts.

The doors to Leaf’s upstairs room were closed, and the lights were all out, while downstairs people were eating and drinking, getting on with their Sunday night. But where was the gig?

Frantic online and inbox checks were made, and a degree of foul language was used, before we gave up and went inside to ask. Where was the gig?…..seemingly even the staff didn’t know…

“What gig? There’s no gig on here tonight, just some guy called Frank and he’s already done one set. He’s just having something to eat, he’ll be back on shortly….”

A glance at the stage area, and we saw Frank. Only Frank wasn’t Frank. Frank was, in fact, Stephen Harms, a gifted multi instrumentalist, who together with Devin Tuel is Native Harrow.

This was getting weirder. We were faced with the prospect of listening to a set of quiet contemplative folk soul while coffee was barista’d, cocktails shaken and loud, laughter filled conversations engaged in.

This touring band, on the road plugging the beautiful Happier Now album were actually, here and tonight anyway, background music. What a terrible shame.

It seems that whoever was promoting the show had failed to do any actual promotion for it, which meant that we, the audience, here to see them numbered only 3. And with the sound of a frenetic and loud restaurant bar to contend with.

A real shame. Not only that, but even though we’d turned up earlier than any reviewer has ever turned up to a gig, we’d missed half the show.

Native Harrow, thankfully, were undeterred and absolutely professional, so we were happy to try and block the background noise out and concentrate on their all too brief 8 song set. Devin Tuel’s voice has been compared to Joni Mitchell and Judee Sill in the past. High praise, and absolutely worthy in her case.

For us, though, we heard a soulful side, a richer, more Laura Nyro sound. Either way, her voice is sweet and pure, aching with pain in one phrase, and all towering strength the next.

The set featured a couple of real highlights from the album, including the sweet and breezy How You Do Things, with an instantly familiar melody that could be 40 years old and hand carved in Laurel Canyon. Or the slow soul groove of Something You Have, a yearning love song.

@nativeharrow was a wonderful gig tonight @LEAFonBoldSt Flavours of Joni, with hints of Laura Nyro soul. The sun shines in every song. Wonderful stuff. Listen, then buy the album Happier Now. They’re back this way. February. Watch this space. https://t.co/6MwgORquAJ @Getintothis pic.twitter.com/pjebKEF9f2

There’s a richness and elegance to Tuel’s writing, which could well come from the decades she spent as a classically trained singer and ballet dancer before realising life held a different, less rigorous promise for her and she broke out on her own, playing round Greenwich Village at night, and making coffees all day.

Poor Beggar from 2015’s Ghost album, a haunting song, aching and dark, was another highlight, despite the subtlety being lost in the air in a busy tea room.

Someone had ordered more cocktails, shaken not stirred. What a shame. This was a very odd evening, disappointing for the artists, but on reflection, no less wonderful for that. Why would a promoter not promote?

Why would they book a touring band into background music. A gig’s a gig, we suppose, but this duo truly deserved so much more than a reviewer and his mate, and one other dedicated fan. We bought merch, anyway, and promised them a bigger crowd for their next visit, even if we have to promote it ourselves. Hmm…