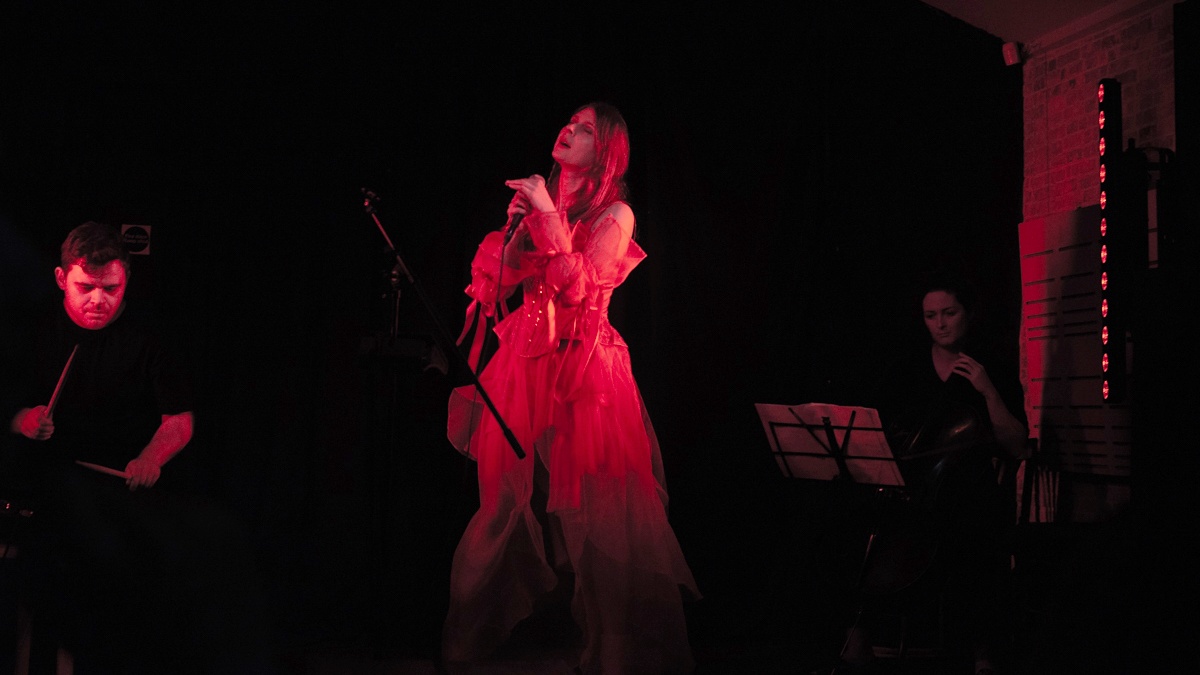 Having been in Toronto not three weeks ago, being asked to head down to 81 Renshaw Street to see a new Torontonian in the flesh almost brings the holiday vibes back.

I say almost, I’d need a Mill St beer supplier and a poutine outlet for the full holiday experience, still, though, it’s too good an opportunity to refuse, frankly.

Lydia Ainsworth, tonights Torontonian, is a composer, producer, and singer based in the great Ontarian city.

To date she has released three long players, Juno-nominated Right From Real, Darling of the Afterglow and Phantom Forest, her latest creation released in May, is the reason for her sojourn to this fine city.

The weather might not be what she had at home, it’s decidedly grey and glum, but we were hoping she had packed a little warmth in her suitcase for her tonight.

As we arrive, 81 Renshaw does its subtle trick of weaving you through the record stacks before revealing it’s darker side in its live room, as it always does, though sadly at the hour we arrive it’s a little on the quiet side.

Before we get to Ainsworth, we are treated to a set from Tierny, and it’s a little confusing to us if we’re honest.

Everything is piped through a laptop, which is fine in itself, but to our ears, we’d love to hear her with a full band, she may well have one, but as this was the first time we’d set eyes on her, the lack of a band jars just a little.

She has, as we would say at home in Ireland, a quare (superb) set of lungs. She has a truly great voice, with a wonderful vocal range; she’s up there in the Amy Winehouse school of vocal veracity, maybe a nudge higher, but it’d be lovely to see her let loose with a five-piece behind her.

Her second track, I’ll wait, comes with a laptop generated harmony, and it’s here where we’re left thinking there might be a tad too much help through said laptop.

It takes her a couple of songs to really warm to the room, though at this hour it is still quiet and we don’t envy her job, she most definitely had her work cut out for her.

In her defence we decided she was probably holding back a lot, a small room, a small crowd, the hour, the weather, none of that is a predilection for letting it all hang out. It is only Thursday, after all.

We got songs about love, death, sex, heartbreak, elation and internal revelation, which is, well, expressive.

Perfect and Profound was a high point for us in a set that was too short for her to really get into it, it’s all anguish, anger, and sheer frustration. Which is no bad thing, we have to get this shit out somehow, surely.

She straddles genres with wild abandon, part soul, part electronica, part hip hop, part rock, she needs a band people, in all it was a fascinating set, and the room warmed up with her, which is as much as you could hope for given the circumstances, generating love is pretty cool, right, it’s interesting stuff at least.

Did we mention she needs a band?

The main attraction of the evening was our jet setting guest, Ms. Lydia Ainsworth.

Born in Toronto, her father a singer-songwriter, her mother a set designer, it would be easy to imagine her training has involved an overly long apprenticeship.

She began with the cello at 10 and found herself at the Etobicoke School of the Arts, in the west of the city, in her teens, she studied composition at McGill University in T’dot and was subsequently named as an Emerging Artist by the Canada Council for the Arts in 2008, she went on to complete a Master’s degree in composition at New York University.

Clearly the familial apprenticeship had an influence.

She started composing music for films while at University, she recorded her first album, Right from Real, while living in New York and added the finishing touches on her return to Toronto, work shy, she is most definitely not.

Right from Real was released by Montreal indie label Arbutus Records in 2014, it was nominated for the Juno Award for the Electronic Album of the Year in 2015.

In 2016, she was named by the Canadian Broadcasting Corporation as one of “6 Canadian female producers you need to know.” Not a bad award, that.

For us an interesting snippet, and perhaps our draw to dander down, was her part in a track for the Stranger Things soundtrack called ‘Earth Song‘, if you’re garnering the kind of attention that gets you onto Netflix’s biggest show, you’re doing something right.

She takes to the stage with a cello player and a chap on what we’re going to call a ‘range of electronic kit’, it included a drum machine, and that’s as far as our technical knowledge went.  Sorreeee.

They launch into a bass heavy set, and by the time they get to their second song, Tell me I Exist, we’re completely sold, it is as if someone in an unlicensed lab crossed The Eurythmics and Hannah Peel with a drop of Kate Bush, then accidentally dropped a Petri dish of Kate Tempest into the mix by accident.

It’s easy to name drop to describe this kind of stuff, to describe an artist we haven’t seen before, and it’s not entirely helpful, but it’s those four we’re reminded of, even at this early stage.

The pace quickens and slows, the energy carries you along, the more contemplative songs slow you down gently, those with a quicker pace pick you up, you could pick any one of these songs and drop them into a Wes Anderson movie with relative ease.

The weirder and more symmetrical, the better.

As the show progresses we’re reminded a little of Maria Doyle Kennedy, of shotgun-toting Siobhán Sadler from Orphan Black, Feist, Hothouse Flowers, Mütter and Commitments fame, it’s all about the song, all about the voice and how that guides the melody and soothes the soul.

It’s beautiful stuff, though perhaps Lydia needs a set of Maria‘s bells, because they are, frankly, remarkable. (There is, for good money, a story about a planned “quiet night” at an MDK gig that turned into drinking in a hotel bar at 5am if you’re interested. We will sell.)

It’s fair to say Ms. Ainsworth left quite the impression, it’s part haunting, part tragedy, part lovelorn and loss, all heart, the flowing red gown, the ribbons, and the stage presence, it all builds to a beautiful vista of sorts, if you discount the glowing red LEDs, which Mr Saleh complained about with some conviction and some authority…

We don’t blame him.

Their third track, The Edge of the Thrill, was added to by a snippet of digitally delivered harmony, together with the waves coming from the cello, we were a little blown away. By the third song.

One of our favourite tracks is ‘Tell Me I Exist’, it is a song that deals with the need to be seen online, the need to portray a beautiful, Instagramable life, costs you any anonymity you hoped to hold onto

It is a song for our times, frankly.

Now, in contrast to Tierney, it would be very easy to pipe all this in from a $600 laptop you aren’t that worried about dropping. Travelling from Toronto and then across Europe as a solo act is decidedly cheaper than travelling as a trio. Though we later discovered the Cellist is from this side of the pond, still, though, it’s a pricey business.

But the trio on stage adds depth, a soul and warmth to this that is perhaps lost via ones and zeros, while Tierney needs a band, we’d love to see Ainsworth with an orchestra, and if anyone can arrange that we’d be very keen to keep in touch.

It has to be said, there was the odd blip as they sorted themselves out, the odd hesitation, the odd pause for thought, not a lot in the way of banter, either on stage or between the band, but that didn’t matter. Their songs were more than able to speak for themselves.

As noted earlier, we were in Toronto a few weeks ago. Our small people are still dealing with the jetlag and it is painful in ways that are hard to describe when you drink this much Love Lane.

That this was the first show of their tour suggests they got off a plane very recently, they did alright with the time difference. God bless them, shame they didn’t bring any of that weather though.