It’s been a while since we’ve been to the GoGo Cage. We used to be a regular goer back when it was at The Magnet, and also The Cabin Club.

Tonight we’re in the Zanzibar, where, weirdly, last time we were here for a Lightning Seeds gig post Hope & Glory, a ceiling tile fell down and water also poured from the ceiling…maybe this writer doesn’t have much luck.

So we’re feeling a bit nostalgic, there’s 60s garage tunes playing and video of Captain Beefheart mixed with 60s gogo dancers are projected onto the stage.

First up is Manchester’s Fruit Tones. Keeping with the Nuggets garage punk vibe, they fit in well with the videos played on screen behind them. Tonight they’re feeling a bit lethargic because they’ve just eaten two whole slices of Lasagne.

Live we thought the vocals sounded like The Seeds’ Sky Saxon and the trio are pure 60s garage pop mixed with a hint of 70s glam.  We’re reminded of the Night Beats’ Sonic Bloom era or Black Lips’ Let It Bloom era.

Yep things are coming in twos tonight, leaks and blooms.

Halfway through a song they manage to freeze completely still in their actions mid instrumental for longer than should be necessary so the crowd start egging them on. It’s funny to watch and sets the tone for the evening.

Next up are Ohmns, one hell of an excellent live band in Liverpool, they’re loud and proud and create an amazing atmosphere.  They’ve brought their own crowd it seems and turn the night up a notch with shirtless guitarists wandering into the crowd and band members doing flips onstage to turn a pedal on, guitar and all. The crowd are indeed warmed up.

A King Khan show is one you need to seek out.  Always a party and always different, we’ve seen him in the basement at the old Korova as King Khan and the Shrines, more in the crowd than onstage and at one point maybe a saxophonist or at least a keyboard was crowd surfing across a very small room.

Last time he was at Sound City 2018 with The Shrines in one hell of a spandex jumpsuit with the arse cheeks cut out for a huge party at Hangar 34.

Tonight  his latest incarnation is supergroup Louder Than Death, we’re in a very sweaty packed out Zanzibar and Ohmns have just riled up the crowd.  King Khan appears with a bunch of roses, walking into the crowd to find someone to give them to.  They end up being thrown around the room, one is hanging from a speaker, another between an audience member’s teeth.

The rest of Louder Than Death appear, guitarist Looch Vibrato and drummer Aggy Sonora are both from incredible French punk band Magnetix.  They played the Liverpool Psych Fest back in 2017 and were a firm favourite since seeing that set.  Plus The Shrines’ Fredovitch on bass.  And they’re all in blue denim open vests with punk rock patches all over.

Louder Than Death was also originally formed with legendary US punk band The Spits’ Sean Wood, who unfortunately couldn’t make this tour because, King Khan tells us: British Airways. The crowd boos.

Their set is a blast of gnarly fun punk, with many tracks from latest album Stop Und Fick Dich played including Snot Queen and Leather Boy complete with brilliant anecdotes to go with each song.  Two songs are sang off a square of brown corrugated cardboard.

The crowd are with them the whole way, with mosh pits on the go and singing every song back into held out microphones, all in the tiny space of the Zanzibar.

Louder Than Death don’t even stop when a drink gets knocked all over the sound desk, or when they can’t really remember how to play a song they only just wrote whilst in Liverpool (they wanted to harmonize just like The Beatles).  It’s a raucous rowdy party that doesn’t stop.

Last two songs Spicy Chicken (watching the video for this is a must) and Baby Huey end the night on a high.  It’s well after 11pm and the audience carry on chanting well after King Khan has left the stage.  Rise Baby Huey. Rise Baby Huey.  Another huge King Khan shindig complete, when’s the next one? 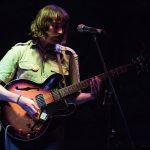 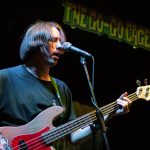 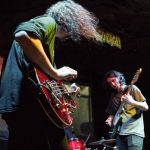 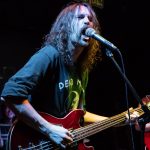 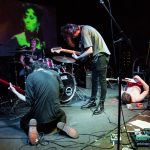 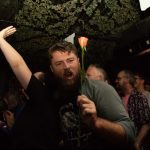 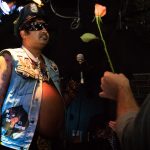 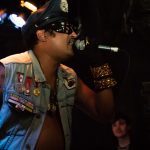 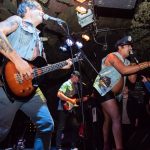 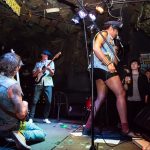 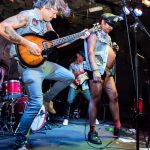 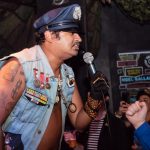 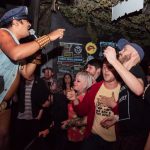 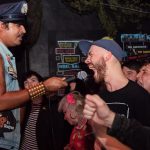 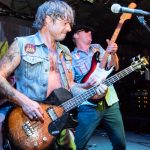 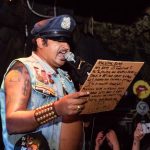 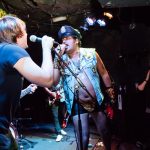