Average Sex roll into Jacaranda Phase One for a party, Getinothis’ Lucy McLachlan doesn’t want to miss out on this one.

It’s a fairly quiet Friday night in Liverpool, it’s the start of the new football season.  We presume a lot are sat inside somewhere eyes glued to a screen with a pint.

But we’d rather be somewhere else.  London’s Average Sex are in town, they’ve made the trek to Liverpool quite a lot in the past year playing District, Skeleton Coast 2018, Sound City 2019 plus another Phase One show supporting Tim Burgess whilst also appearing in his band the Anytime Minutes at the beginning of the year.

It’s also pretty balmy out, warm and stormy looking we’d understand why staying in and watching the football might seem like a better option than the possibility of getting both soaking wet and sweaty at the same time.

But tonight there’s belter of a gig going on down at Phase One and we arrive just in time to see Gen And The Degenerates bounce onstage.

We’d been wanting to catch these for some time, we’ve seen and heard the name around, and they don’t disappoint.

Singer Genevieve Glynn takes centre stage immediately playing up to the cameras and phones in front of her.  She’s a fireball of energy as also depicted on her outfit with a big powerhouse voice that blasts through the wall of guitar noise behind her.

They have a great group of followers, one of whom is apparently on their fourth Degenerate show of 2019 and gets a free t-shirt, who know their songs and are joining in bouncing around in the crowd.

Next up is Hannah’s Little Sister, featuring bass player Nina Himmelreich formerly of tropical pop noise makers Pink Kink.  The energy from the Degenerates set is carried on but this time through the vocals, fast paced and at times shouty and screaming, drinks and a whole keyboard are knocked over onstage.

But promptly cleaned up by the band, hey, we’re not destroying the place here, with copious amounts of blue roll and we also learn about a new cocktail blending gin and a can of Hooch to create ‘Gooch’.  You learn something new during a Hannah’s Little Sister set.

The crowd thins out a bit for the Average Sex.

People are enjoying the coolness outside, but it seems it was also one of those gigs where the support bands bring their mates who get off before the main band begins. But that doesn’t mean to say there’s no atmosphere.

Singer Laetitia Boquet tells us how much they love playing Liverpool, mainly for all the partying to be had after the gig, in between dancing round the stage, playing air guitar on her knees and rolling round the floor.

At one point she spies an audience member with her face on their t-shirt and acknowledges That’s my face!! (The cover for newest single Erotomania).

The band are a joy to watch and always look like they having the best of fun onstage, which transmits to the crowd, the majority of the few that were left were also all up and dancing around, a good time was had by all.

Seeing as they can’t keep away we expect they’ll be back in Liverpool very soon. 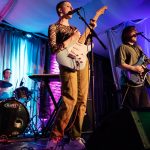 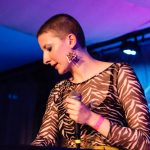 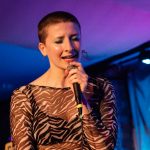 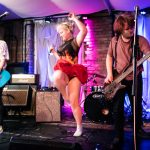 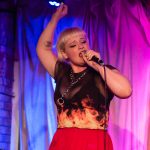 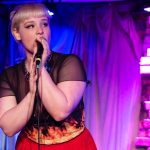 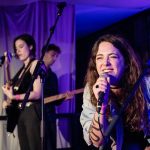 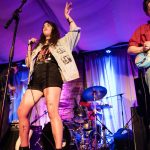 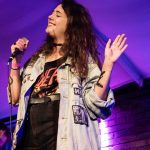 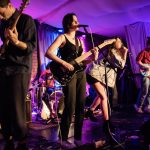 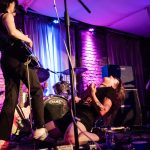 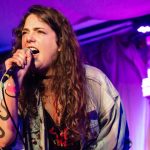