Piroshka, the newly formed remnants of some fine 1990’s indie bands bring their wares to Phase One on a Saturday night, Getintothis’ Steven Doherty goes back to the future.

A gloriously sunny Saturday night in Liverpool and there’s a lot of competition for audience members this evening with Africa Oye also in full swing.

Piroshka are made up of former members of Lush, Elastica, Moose and Modern English, all renowned bands in their own right over the years.

So-called ‘super-groups’ do not have the best track record in the past, but as debut album Brickbat shows, there is an appetite not just to try and live off former glories.

They need the paying public also to leave their pasts behind them and move on forward with them, we’ll see if that happens in a bit.

But first, the aperitifs.

Which, it seems, we are going to have to wait a bit longer for.

However, in the next 5 minutes, the venue starts to fill up (the Britpop couples’ babysitters must have arrived en masse) and at 8.30 sharp, Good Problems amble onstage.

They start nervously with lots of arm-waving, moving guitar and vocal levels up and down, but then gradually warm into their set.

They scatter their half-hour with new songs, which sound much more rounded than some of their earlier numbers.

It’s a Yeah Yeah Yeahs type of shouty grunge with a bit of a pop element. Even though they are a few years into it now, it feels like they are at the start of something big.

They end with their 2017 debut single Curio, and are ones to keep a very firm eye on.

Africa Oyé: Gallery and reflection from Saturday in Sefton Park

The absolute joy of reviewing bands is finding one that have not been on your radar, and them then making you stop in your tracks.

It has only happened a handful of times, but tonight it happens with Haarm.

They suffer an ‘avalanche’ (their words) of technical difficulties during and after the first song, but this strangely seems to steel them.

The only down side being at times they are dangerously walking the line of ‘playing to your mates’, (especially those who choose to talk through their set), but the tunes, as well as some sharp witty in-between song banter win out.

A lazy but accurate description would be describe to Haarm as a more electric, funkier Clean Cut Kid, whilst still being much more.

Then it happens, the rarely felt goose-bump moment.

Last single Better Friend is an absolute behemoth, a monster of a tune.

There seems to be a sad melancholy, as there is to most of their songs, which evokes 90’s kitchen-sink drama queens Dubstar, all happening underneath the simple facade of a foot tapping tune.

Piroshka (which as we all know, is a Hungarian term for the fairytale Little Red Riding Hood) are expanded to a six-piece for live performances, and this is noticeable, adding another layer to the recorded versions.

The unmistakable vocal of Miki Berenyi, as searingly ethereal now as it ever was, launches into the first great pop moment of the evening, Hated By The Powers That Be, which ends in a squally thrash.

Prior to the almost skanking Village Of The Damned, Berenyi bravely addresses the issue of the relatively sparse crowd in attendance by guessing that the locals are “at home committing suicide about the next Prime Minister…or forming an army.”

She knows us too well.

A recurring theme throughout the set is the expanded sound, with huge kudos due to the keyboardist/instrumentalist who was by far making the biggest impact, alongside her backing vocals, by playing what can only be described as something that looks like a machine found in a disused nuclear bunker.

Highlight of the hour was undoubtedly the opening track to Brickbat, This Must Be Bedlam, described tonight as “our Brexit song“, which ironically for such an up-to-date topic, is the most retro sounding song in their cannon, a 90’s indie stomper.

Thankfully though, on the whole, this is no nostalgia trip, either from band or crowd. 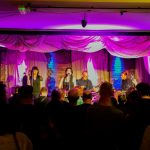 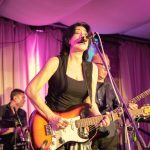 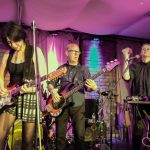 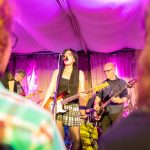 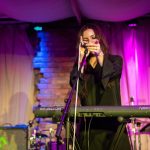 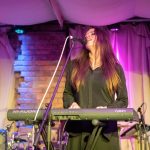 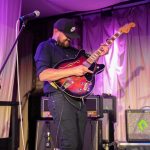 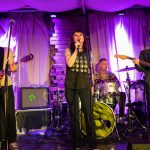 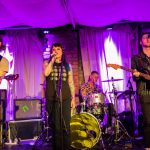 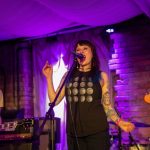