Nick Cave brings his Conversations tour to Liverpool, Getintothis’ Banjo tells of a unique and very special night at the Olympia.

There was a time, back in the ’80s, when Nick Cave was known for hating interviews.

He could be surly, confrontational and even violent towards interviewers.

This attitude also spread to the questions he was being asked where, tired of repeatedly being asked the same things time after time, he would berate the interviewer for his mundane queries and refuse to answer or even engage.

But this is the Nick Cave of old.  To say he has mellowed is to do him a disservice, but he has matured.

As Muhammad Ali once observed: “the man who views the world at 50 the same as he did at 20 has wasted 30 years of his life.”

Cave’s latest tour sees him actively inviting questions, though this time from his fans.

His Conversations with Nick Cave tour is intended to be exactly that; a conversation, albeit interspersed with songs performed alone at the piano.

This is an unnecessary and incredibly brave move for Cave.

Unnecessary because an artist of his stature and with his dedicated fan base does not have to open himself up like this to his audience and give them carte blanche to ask whatever questions they so want.  And brave because he has previously been someone who strove to protect his personal life from the public glare.

How much of this shift is due to what Cave calls ‘the trauma’, the tragic accidental death of his son, is unknown, but the person that emerged from this ordeal may not be the same as the person who was forced to enter it.

As many of us have done in the midst of our own dark days, Cave felt the need to start talking to people.  To this end, he launched the Red Hand Files website which allows his fans to post questions he would then answer.

This has become, as Cave’s describes it tonight, ‘very much a part of my life’.

It would seem it also became such an important part of his life that he has decided to take the idea one step further and recreate it in a live setting.

This is not to say that Conversations with Nick Cave is an extended form of therapy, but a desire to connect with the people for whom he creates his art.  And for Cave, this creativity is a lifeline.

On his last tour, Cave stepped up to play the country’s arenas and my own concern was that this would lead to a gap between artist and audience that he would find himself unable to bridge.

These fears were groundless, as the one striking memory from his astonishing show at Manchester Arena is that way he interacted with and was supported by his audience.

Given that this interaction is so important to him, perhaps the Conversations tour is just the logical conclusion of that desire to reach out to those who have, in effect, been there for him.

The audience tonight is seated, lending an almost formal air to the proceedings.

Tables have been set up on the stage and a select lucky few audience members are seated there, as if in some public dinner appointment.

Apart from the evening’s unusual format, Cave left venues of this size behind some years ago.  Add to this the fact that it marks his first appearance in Liverpool for many years and you can perhaps understand why this is a special night.

As the lights dim in Liverpool’s Olympia, some Skeleton Tree backing tracks play and Cave‘s disembodied voice plays over the speakers.

He appears on stage to huge cheers, takes a seat at the grand piano he has on stage with him and opens with a solo version of God is in the House.

He then explains his rationale for his Conversations tour, saying that the Red Hand Files, saying: “it feels like I’m tapping into the very soul of my audience” and describing what he sees there as being ‘very moving, very challenging.’

A lot of the Red Hand Files, and a lot of tonight’s questions, inevitably concern death.

He tells us of an email he received from Leonard Cohen that simply said ‘I’m with you brother‘ and the effect that this simple message meant to him, just letting him know that somebody was there for him if needed.

In a way, tonight we are all there for him in this way.

He tells us that hearing that other people have been through similar traumas was a big thing for him and that rather than feeling that he and his wife Susie were islands of grief, isolated and alone, they soon realised that they were but a part of ‘a river of grief‘ that ran through the world.  The comfort of not being alone is a powerful thing.

One of the effects of his opening himself up to public scrutiny like this is, he tells us, that it has given him back his ‘terror of performing‘.

If he has grown comfortable playing his epic live shows with the Bad Seeds, this tour strips him of any safety net, stops him from being part of a gang and places him in front of a crowd completely on his own.

He goes on to say that the act of giving microphones to the audience is ‘in some way an exercise in revenge‘ passing some of that performance anxiety back into the crowd.

That said, a lot of the questions tonight are quite long, detailed and, in some cases, ramble.  It seems that the Liverpool audience do not feel the nerves Cave was anticipating.

It is an extraordinary thing for an artist to do, to break cover in such a fashion and to divest themselves of anything to even remotely hide behind.

This is Nick Cave stripped artistically and emotionally naked.

The aim of tonight is not a Q&A session, but rather as the name of the tour suggests, a series of conversation.

A team of helpers pass microphones out into the crowd and leave them with audience members so that they can respond and develop their conversations with Nick Cave.

To his credit, Cave is not phased by any of the questions or requests that come his way and says he is ‘happy to answer questions on anything at all.’

Some of the audience take this quite literally, and some of the questions are quite bizarre, with one cheeky punter even asking him about dying his hair and saying she assumes that ‘the collar doesn’t match the cuffs.’

The night is about more than just conversation.  Cave is the subject of various requests and he responds graciously to them all.  These include handing out a list of his 10 most precious thoughts, having one lucky person say on his piano stool while he played a song and signing a woman’s arm so she could get it tattooed the following day.

Although some of the questions are emotional, Cave is a natural comic and he manages to bring these conversations back from the brink and makes his audience laugh out loud, seemingly at will.

One such anecdote revolves around actor Russell Crowe telephoning Cave up to ask if he would make the soundtrack to an as yet created Gladiator 2 film.

The preposterously named Gladiator 2: Christ Killer saw the protagonist on the rampage in heaven and sounds like it should be some kind of Robert Rodriguez Grindhouse flick – and by the close of his story literally the entire room is in hysterics.

It’s a ‘you had to be there‘ moment – but that’s what makes the evening such a success. Something to cherish.

There is a moment when, while Cave is talking about depression, somebody opens a door and sunlight streams through into the darkness.  This is as good an illustration of tonight’s highs and lows as any we can think of.

As well as the conversations, Cave plays a selection of piano and vocal versions of his tracks. Stripped of the band, he plays the best version of Mercy Seat we have seen him perform live.

Elsewhere he entertains a child asking a bizarre question about song-writing, invites a Belgian woman up to fulfil her dream of sitting on his piano stool while he plays reminding her of the time she was a child, he accepts a gift from a musician and candidly talks about his 9-5 office routine of writing songs.

“Don’t wait for inspiration, just fucking do it,” he tells another songwriter in the crowd asking for tips.

The Warehouse – Liverpool club that saw The Fall, Nick Cave and more pass through its doors

The songs he chooses are not the ones that you would imagine most suit the piano treatment, such as Avalanche and Higgs Boson Blues.

Clever choices, all superb and all adding to the night’s special atmosphere.

Cave is the perfect person for a night like this. Intelligent, gracious, patient and a joy to listen to.

He has the stories, the insight and the character to bring his stories to life and we leave the Olympia loving Nick Cave that little bit more than when we entered. Spellbinding. 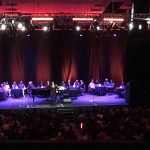 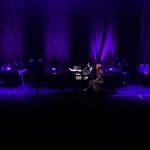 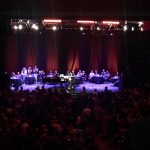 Nick Cave receives a standing ovation and hugs from children 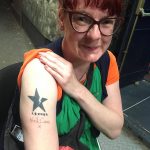 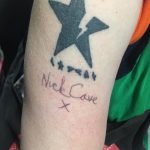 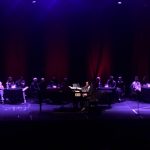 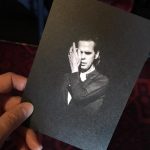 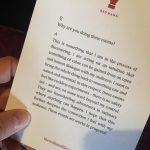 Nick Cave card handed out to fans at the Liverpool Olympia