The Shipbuilders found themselves adrift in The Shipping Forecast alongside COW and The Gear on Friday night, Getintothis’ Chris Flack sent us this message in a bottle.

The Hold, if you will, is an LED fuelled torture chamber, seemingly designed to drive you insane. But folks, it’s really not that difficult. White light, one of them, just the one, turned down low even. One.  Please?

We’ve been at this game for a while. When you ask a promoter what time their gig starts at, they will invariably tell you that it will begin precisely 30 minutes after the doors open to the public. This is nonsense.

The lads from The Shipbuilders were only too happy to send us a list, and we appreciate the effort. Though, if we’re honest, we tend to ignore those lists. They’re used more as a guide, rather than a timetable.

The start time will normally be at least 30 minutes after the first time listed. Gigs run like Northern Rail trains, they are never on time because there are always leaves on the line.  Or its too cold, too warm, too dry, too…

Or, you know, pedal boards are point blank refusing to cooperate.

Not so for Shipwrecked in The Shipping Forecast, like a well-oiled weather-related nautical radio broadcast they start at the perfectly shipshape time of 8 on the nose. As per the list, which we had obviously ignored.

6 Music Festival Liverpool line up, venue and ticket guide of who’s on, where and when

This start time business is not an exact science, we will endeavour to be on site early for gig reviews and the like, but gigs rarely start bang on time.  We were upstairs having a leisurely pint of Camden Hells when we heard a noise that sounded worryingly like a guitar emanating from the hull of the building.

Surprised is not the word.
Eight O’clock on the nose.
Unheard of that.

The band responsible for giving us a fright was COW. They were up first and they are a supremely clever little four-piece, with just enough scuzz, fuzz and feedback to carry their psychedelic rock and roll onto the street.

The first thing to strike you is how some of their songs have a remarkable ability to lock into your subconscious on the first listen, clinging like a leech, refusing to budge, even after you’ve liberally applied salt water.

With lines like All my friends are dead to me, or, Ah you’re better off dead, or for that matter, Drugs to make you happy, drugs to make you sad, from the same tune, they are incredibly catchy things. Infectious almost, like a dose of the scurvy, if you will.

Love it when there is a good crowd for first band on. The Gear at 9. The Shipbuilders at 10. Come to The Shipping Forecast! pic.twitter.com/B6b5nFssif

That they’re all delivered with suitably sea-worn harmonies and rum soaked vocals, only adds to their charm. The sound was pretty perfect too, given the room. Their last song included a spectacular 10-minute segue where the lead guitar amp was pushed to its very limits by its minder, Kyle. Every note was dragged out kicking and screaming, begging for mercy; it was a gloriously relentless lesson in feedback and control. Beautiful.

If your Friday night needs anything, its a proper dose of Hendrixesq, 70s reverb soaked twangy rock and roll. The Gear brings all that and more. It looks, early on in their set, that they’ve brought a healthy dollop of the crowd too.

There are very few bands bringing this kind of noise, the crowd literally rushed to the front as they took to the stage, there’s a lot of dancing, a lot of banter and a lot of love in the room.  A lot of love in the room in fact, for a band that sings about scallys, drug dealers and love and peace. That range of subjects can be confusing after a few pints of Hell. Let us tell you.

They use snippets of speeches, TV, films, sounds from elsewhere and they all add to the mix, bringing the noise levels up. The noise from the crowd spoke for itself. Immense stuff.

If you were to try and sum up The Shipbuilders, it could go something like this. They’re a sixties sounding quartet of hard drinking sailors; or they’re sweary, shouting seamen or perhaps wandering, warbling troubadours.

There’s is a much lighter sound than their shipwrecked compatriots, there’s a lot more acoustic guitar in the mix, they weave their way through a Tarantino esq set that to our ears doesn’t seem forced, they’ve clearly honed this sound to within an inch of their lives.

They love this, they love their work, their sound is perfect, their stage presence is a joy to watch, even introducing news tracks doesn’t appear to bring out any nerves.  They’ve obviously been at sea a few times. IIt’spolished, but not overdone. Theres enough roughness around the edges to make them loveable, and this crowd loves them.

It goes from a sixties movie soundtrack through to Hank Marvin, via The Beatles, The Monkees and Cast.  It’s like the Birkenhead to Belfast Ferry when there’s a party waiting for you at the other side, all ups and downs and some beers and laughs.

The abuse they take when they walk on suggests they’re a perfectly amiable bunch, there’s no hint of ego, nothing verging on bravado. Just a set of catchy songs that suits their moniker. Its racuous, swaying sea shanties, a decent singalong, its fun.

And if that’s not what a Friday night in town is for, then we don’t know what is. 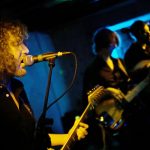 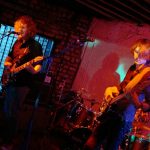 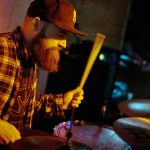 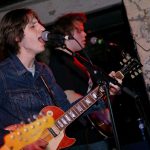 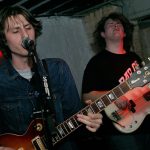 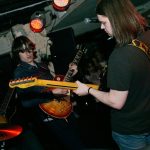 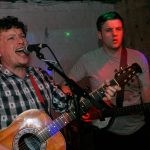 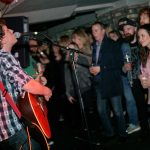 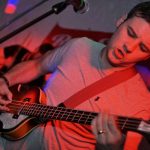