Indie rockers The Courteeners, took to the Echo Arena on Friday night. Getintothis’ Amos Wynn was there to catch the Manchester madness.

Manchester has a strong history of producing great bands, and The Courteeners are well and truly a part of that and have cemented themselves along side some of the city’s greats.

Since the release of their debut album St. Jude ten years ago, which they celebrated earlier on this year, the band have enjoyed a series of further releases and big gigs along the way.

Something Liam Fray and co are renowned for is their fantastic live shows, with their fans being some of the best around, and the Echo Arena show demonstrated this.

Supporting the Middleton band on Friday was Liverpool‘s own Zuzu and Scottish sensation Gerry Cinnamon.

Kicking off the evening was the impressive Zuzu. With already a few big support slots under her belt this year, the GIT Award One To Watch 2017 winner keeps on rising to the occasion.

She would’ve certainly have enjoyed hearing her poppy songs echoing across the arena as the venue slowly began to fill up.

WHAT A NIGHT! Thank you liverpool for being the warmest crowd. This was a fucking dream come true,Thank you endlessly to @thecourteeners for being the kindest people in the world,I’ll never be able say thank you enough! Last show of tour tonight in Brixton. GOD BLESS THE BAND! pic.twitter.com/5xtk68AGov

Gerry Cinnamon was next, entering the stage to the whole crowd chanting his name.

Earlier on in the day he had quickly sold out his own Liverpool headline show for March, and it was clear to see why with whole arena packed out and ready to see him.

For those who hadn’t heard him before, they would’ve certainly been converted, with the Scotsman producing an excellent set on his acoustic guitar.

Having no record label have certainly not held this man back, with the clear quality of his songs getting him further than any label could.

Kicking his set off with Lullaby and Sometimes, the Scot sounded superb. Vocally he sounded just as good as he does in the studio, and watching the crowd jump along to him strumming his guitar seemed to encourage him more.

Belter had everyone enjoying his lyrical prowess, with the crowd really taking to the 33-year-old who will be headlining arenas himself in the not too distant future.

If the Courteeners where the kings of Manchester in Liverpool last night, then Cinnamon was the prince of Scotland, energising the crowd by shouting “God bless the band.”

It was then time for the Mancs, anticipation was high for what was set to be another boss night for the ‘teeners crowd.

Are You In Love With a Notion? has long been the staple opening song, and for good reason as it instantly got the arena bouncing.

That followed by the excellent Cavorting had everyone shouting the words back at Fray, ten years on from its release and it means more than ever.

As well as taking the crowd on a journey to the past, they also offered a glimpse to the future with new track Better Man.

If the version is anything to go by then it will be another strong singalong weapon in their armoury and gives good reason to have optimism for the upcoming album that will be out at some time before the sell-out Heaton Park gig in June.

Whilst the new ones were enjoyable; it was the oldies that was the real treat.

Hearing Fray sing “the gaggle of girls who are singing to loud, they fucking do my head in” with so much passion for Bide Your Time was superb.

A lot of the crowd wouldn’t have been old enough to remember the release of that first album ten years ago, but they sang along with as much joy as those who have been with the band the whole time.

Before singing the angelic The 17th, Fray made a point of saying “this is for everyone who says we’ve only got one album,” before the crowd burst into another singalong frenzy.

The rest of the band then left the stage, leaving Fray for his acoustic set. Beginning with Please Don’t, which sounded superb.

“We were always told we’d struggle in Liverpool because were from Manchester” Smashed it!

He also played another oldie, Smiths Disco. Referring to the reaction from the crowd who were frantically singing along, Fray declared “fucking hell it’s a b-side.”

With a few new excellent sounding songs, that are bound to yet more favourites to add to the list, the whole band finished on a high.

Not Nineteen Forever always delivers an excellent reaction, and of course Liverpool was no different. Everyone was singing their hearts out to one of the greatest Mancunian anthems.

Before ending the night, Fray gave a heartfelt message. People told the band they’d struggle in Liverpool but “we never had that feeling, fuck football, when we walk through those doors, we’re fucking cousins. From The Magnet to the Academy.”

Courteeners and Gerry Cinnamon at Echo Arena in Liverpool pic.twitter.com/dYox1iO1ZY

He also said after a couple of tough weeks, it was great to be on the stage with your best mates.

The final song of the evening was the incredible What Took You So Long, which was written in a garage 13 years ago.

From a garage to an arena full of loving fans, the track makes the hairs on the back of your neck stand up.

The crowd were chanting and cheering right until the end.

It is certain that the Courteeners are one of the greatest live bands around and the Heaton Park gig can’t come soon enough. 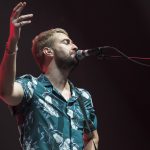 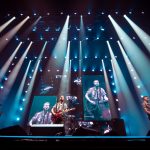 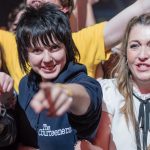 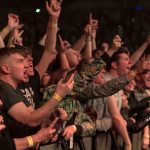 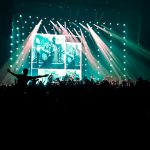 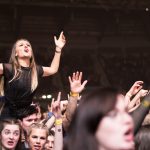 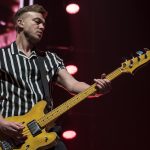 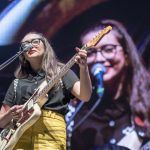 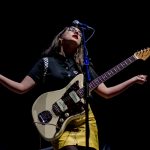 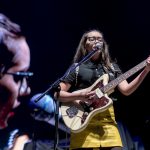 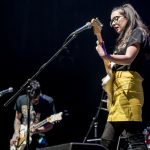