Manchester Collective brought the controversial Schoenberg piece, Pierrot Lunaire, to the basement of the Invisible Wind Factory and Getintothis’ Mark Flannery was there for this unique show.

In the bowels of The Invisible Wind Factory, there have been some diverse and interesting performances over the years, but we’d hazard a guess, none as challenging and unsettling as Pierrot Lunaire, performed by Manchester Collective.

The evening was delivered in two parts. The first, introduced by Elizabeth Alker of Radio 3 and 6 Music, was a guide to Pierrot Lunaire, exploring the themes of the piece, and also a brief history of the background to Arnold Schoenberg’s controversial “play with music”.

Talking with the director, Emma Doherty, and conductor, Tim Burke, Alker whisked the audience back to Vienna of 1912, when Pierrot Lunaire was first performed.  Doherty introduced us to the themes of the piece, and nice and fluffy it most certainly isn’t.

Speaking of mental instability, sex, death and gruesome violence she gave us a flavour of what we were about to encounter. Tim Burke then described how Schoenberg used atonality, which was extremely radical at the time, through brief excerpts from the musicians. Having heard the background to both the themes, history and how Schoenberg structured the music to the words, gave us a better understanding with regards what was about to hit us.

With a minimalist stage setting of a double bed and light, encased in a large spherical shade, and the ensemble of musicians surrounding it, Australian mezzo-soprano, Lotte Betts-Dean, as the narrator, delivered the opening lines to Moondrunk: “The wine that one drinks with one’s eyes is poured in waves by the moon at night” one of the 21 poems written by Albert Giraud, on which the composition is based.

Split into three distinct sections spanning love, sex and religion…violence, crime, blasphemy, and lastly Pierrot’s return home to Bergamot, Betts-Dean gave a mesmerising performance. The style of singing, called Sprechstimme, a halfway house between talking and singing, was at first uneasy to listen to.

However, as the performance progressed, this unusual vocal delivery soon became more discernible, and we were engrossed in not just what Betts-Dean was opining, but her movements and her facial contortions. At times she looked as though she was about to leap into the audience and rip someone’s head off, so manic did she appear.

She portrayed the protagonist of the piece as someone on the verge of insanity, of a person in-between a state of sleep and awakening. Using the bed as a prop, she climbed over and around it, gripping a pillow as though she was dismembering limbs, wrapping the covers tightly around her and switching tone and timbre as the words of Giraud became ever more savage and despairing.

Musically, the ensemble were taut, comprising piano, viola, violin, cello and clarinet, and playing with passion and incredible energy throughout. Chad Vindin on piano helped drive the performance with agitated flourishes, and strident chords, and viola player, Rakhi Singh delivered the screeching frenzy of the madness which was ensuing.

The musicians seemed almost like interlopers on Pierrot’s descent into madness and chaos, as they stealthily moved around the bed, ogling the scene before them. The imagery of the words conjured up grotesque violence…”swarms of black insects” and “lacerated arms”.

Gripped by both the movement, sounds and words, Pierrot Lunaire was unsettling, at times uncomfortable, and yet thoroughly visceral and mesmeric. Manchester Collective and all involved can be safe in the knowledge of making one feel out of one’s comfort zone in a most edifying way. 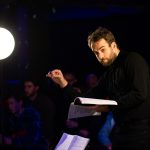 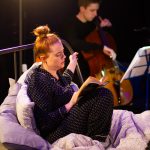 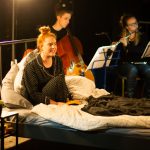 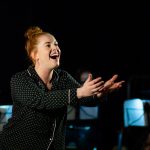 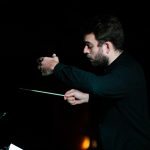 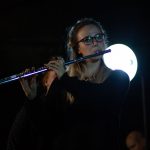 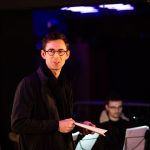 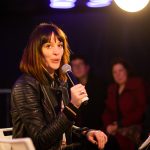 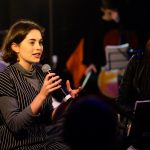 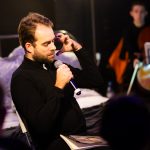