Wooden Shjips set the bar high for Getintothis’ Simon Kirk at the Invisible Wind Factory and he had a whole weekend to recover as a bonus.

For a start, your Sundays aren’t spent hung-over coupled with the impending dread of work the next day. Saturdays, hangovers are more manageable, although as one gets older, even this theory begins to fade.

In any case, on this particular Friday night, Liverpool’s Invisible Wind Factory is lucky enough to host San-Franciscan four-piece, Wooden Shjips, who are in town on the back of their brilliant fifth album.

Simply titled V, this long-player sees Wooden Shjips moving away from their motorik krautrock leanings and more into the sundrenched psychedelic pop realm. Back to Land hinted at this, however it’s V where Wooden Shjips‘ biggest transformation has ensued.

Sure, frontman, Ripley Johnson, has spent the last ten years juggling projects, most notably Moon Duo, who have equally been as prolific as the ‘Shjips. However, with V, he seems to have found the sweet spot. It’s a great record. Despite being very little of it in this country, it’s one to watch the sun rise with cigarette and cup of tea in hand. You wouldn’t associate Wooden Shjips as a morning band but V drips with that quality.

Melbourne four-piece, Mildlife, open up the show. The Australian outfit has caused quite the stir with their latest record, Phase, and it has to be said that their funk infused psychadelia is rather well received.

Next up is Carlise’s The Lucid Dream who sound as large as ever with their nail-through-skull shoegaze incursions with smatterings of dub. Their new album, Actualisation, is released later this month and if it’s anything as good as this, then fasten your seatbelts.

Mental health, music and me: my very own vinyl revival

As the lights dim and the backdrop of psychedelic visuals provide the only source of light through the ‘Wind Factory, Ripley Johnson, Dusty Jermier, Nash Whalen and Omar Ahsanuddin amble onstage and launch into action.

V opener, Eclipse, is delivered quicker than on record, more aligned with the band’s scope of jammy psychedelic space-rock.

What follows is an eclectic range spanning over the band’s discography. For So Long from Dos sounds heavy, more urgent. Then there’s Other Stars from Back to Land. It’s led by Whalen‘s acid frayed keyboards, alongside the water-tight rhythm section provided by Jermier and Ahsanuddin. Johnson‘s cloud-floating riffs round off the stellar number.

Ride On sounds every bit as heavenly as it does on V and one of the highest points reached throughout the night. Ditto, Staring at the Sun, which underpins the core of what V simply is.

By now the crowd are into it, jiving joyously to this sonic haze and Lazy Bones gets a number of punters crossing the threshold. One member of the crowd proceeds to the stage only to launch himself off it, landing face first at the feet of this writer. Seemingly unscathed, he proceeded to repeat this act of idiocy, only this time the unsavoury individual in question causes harm to fellow punters.

Fuckwittery aside, after finishing with Death’s Not Your Friend, Wooden Shjips return for an encore. These Shadows brings a sense of calm throughout the place, only for the final track, Buddy – a cover from New Zealand band, Snapper – sending more people in the world of losing their shit. Where covers are concerned, the ‘Shjips do Buddy supreme justice, adding brushstrokes of motorik charm and oozing melodic drone.

Just as they entered, Wooden Shjips acknowledges their audience and stroll off the stage into a nonchalant haze. It’s as you would expect, however as recent history has shown, Johnson and Co. have set the bar high. After tonight, they don’t seem to show any signs of letting up anytime soon. 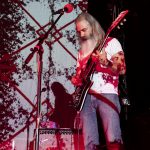 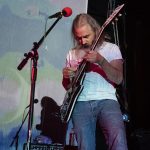 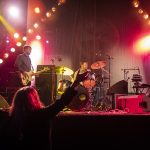 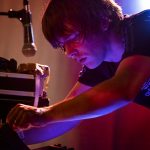 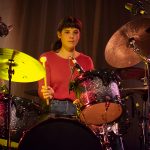 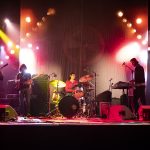 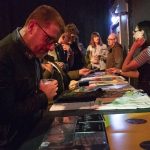 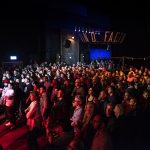 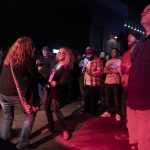 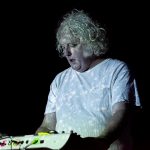