The Vryll Society debut album Course Of The Satellite finally launches into orbit this week.

And to mark the occasion, several hundred people gathered for an exclusive playback of the complete package at new Liverpool city centre venue Jacaranda Records Phase One.

Throughout the evening there was a tangible sense of emotion in the air, for the album represents the end of a significant first chapter for the band.

A chapter that’s seen them evolve from their Dirty Rivers beginnings, sign with Deltasonic Records (who will release the album on Friday August 10), lose label boss Alan Wills (the man who mentored them as young men and became deeply influential in their growth as people and musicians) in a tragic road traffic accident, regroup and substantiate themselves as one of the finest live bands in the UK, release a raft of acclaimed singles, conquer Merseyside festivals left right and centre while picking up two GIT Award nominations, receive plaudits in national radio and print press before ultimately laying down their debut at Parr Street Studios.

And it is a testament to the hard work and devotion of Ann Heston, partner of Alan Wills, that Deltasonic is not only operating and overseeing The Vryll Society – while investing so much as a label to new music – that’s kept the fire burning within the band and the surrounding circle of contemporaries.

It was understandable then to see tears, plenty of hugs and lots of laughing among friends, family, fellow musicians, industry staff, press and fans during the course of the album playback. The raw emotion was there to see.

Weighing in at just over 40 minutes, Course Of The Satellite is a beautiful record. It weaves into your psyche with consummate ease.

On first airing you’d be forgiven for missing much of the subtlety at work – for this is a record which gently unravels and doesn’t ever try to bombard the senses. Instead it coolly seeps into your soul. For it has more in common with soul than the psychedelia label often tagged onto the band.

Take Glows and Spheres with it’s liquid-like mesmeric melody and lubricated bass runs, it’s an exquisite slice of soulful pop. So too Soft Glue – an album highlight – there’s languid guitar licks trading with minimal percussive rolls before a deft, yet huge hook, captures you unaware and pulls you in close. And lead single Andrei Rublev is one of many tracks to thrust Shearer‘s bass to the fore to massage you into position before a sky-scraping guitar takes things to a whole new dimension.

There are, however, various tracks were the band flex their rock and roll muscles – Shadow Of A Wave is a scintillating motorik slice of krautpop while Inner Life cribs Michael Jackson‘s Thriller disco funk with a rocket-fueled cyclonic finale. It’s another album high that is bound to induce mass dance-offs.

One additional feature of the evening was the accompaniment of videos with each of the 11 tracks on offer – be it hurtling through 3D landscapes, tripped out cosmic vistas or live performances within the studio.

Perhaps the best complement we can give Course Of The Satellite is that it feels like a magical whole. A complete package. It’s not an instant classic. We’re not going to suggest it is. However, it feels like the superb culmination of phase one. And that’s more than enough for now. We’d suggest you buy it. 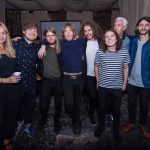 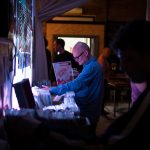 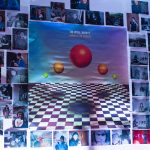 Photos of The Vryll Society at their album playback 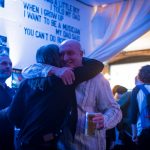 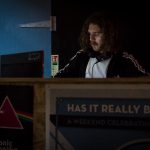 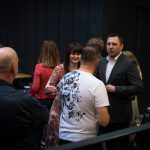 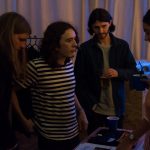 Lloyd, Ryan and Lewis of The Vryll Society 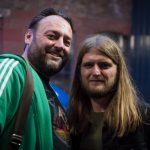 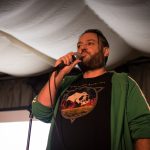 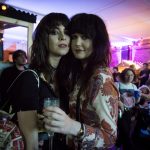 Alex and Rebecca at The Vryll Society album playback 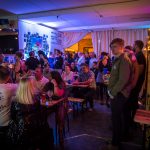 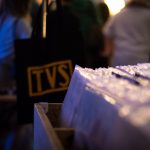 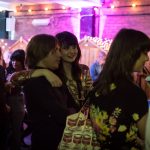 Michael Ellis of The Vryll Society 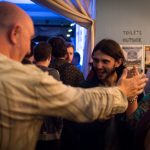 Lewis of The Vryll Society 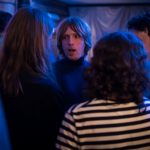 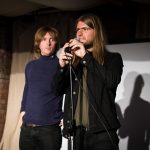 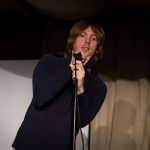