Strange Collective invaded Liverpool’s Constellations for a mini psych fest with 12 bands on a bill covering two stages as Getintothis’ Howard Doupé had a wander down to the Baltic Triangle to see it all unfold.

Now in it’s third edition, this psych celebration is becoming a summer thing.

Not quite an all-dayer (it started at 4pm) Strange Collective hosted a party in the soon to be no more Constellations that doesn’t quite deliver what is the mayhem of it’s much bigger sibling, the Liverpool International Festival of Psychedelia, but it’s a welcome filler, especially as Psych Fest takes a fallow year for 2018.

Constellations will be missed when it has to make way for more student flats, or whatever is planned for the site. It’s a versatile space that works perfectly for a day like this. Indoor and outdoor stages, indoor and outdoor bars, there’s space to move around, to mingle and, of course, to drink in the music.

With the outdoor stage opening two bands before the indoor main room the clouds held on to their threatened downpour- for now at least. The enthusiasts are out from the off eager to soak up as much of the experience as possible. Openers SPQR were appreciative of the effort made and rightly so – they played a blinder.

As a three piece they worked fabulously. Raw, but a set full of songs that paid attention to dynamics with unexpected twists that only brought the hook back into focus when revisited.

New outfit on the Liverpool scene The Lemonade Fix (who notably played their first ever gig for Getintothis’ Deep Cuts) take to the stage with the purposeful eye of casual determination. Opening with an instrumental wig-out more accustomed to a set closer, they ripped the all-dayer wide open.

As those clouds decided to drop the day-long torrent, the synchronised heavenly downpour only served as a contrast to the warmer climates these tunes were taking us to. The sheen of a sweltering Californian heatwave, drenched in psych-sunscreen.

In competition for the fictional role of ‘new house band’ at From Dusk Till Dawn’s infamous strip club Titty Twisters. The surprising subtle dipping into marginal psych genres gives the songs interesting turns and interest. This itself brings the fuzzed-up guitars and beats with an impressive bass tightly wired the right way.

Hannah’s Little Sister opened up the indoor stage and with it they brought a sense of melodic wonder. Channelling a bearish Courtney Barnett that was raised on a wilder diet, Hannah’s Little Sister screamed their blend of stoner-rock. All sweetness mixed with the perfect amount of falsifying indifference.

Also inside was a rather cool idea. Strange Collective had commissioned a group of local artists to design posters for the event. One for each band on the bill and all available as limited edition screen prints for sale. There seemed to be a decent take up and we saw quite a few people snapping up mementos of the day.

There was also a one off special brew for the day – the somewhat headache tempting Rek Ya Nek created for the courageous by local Black Lodge Brewery.

One off brew for the occasion, Rek Ya Nek being modelled by @whoisdoupe here at the @strngecollectiv all dayer in @ConstellationsL pic.twitter.com/cblrpJvot8

The Floormen usher forth a deceptive swirled-phonic hurricane that has the crowd a melted, rain-avoiding mass. Gnarly vocals over a Santana blended musical kaleidoscope. Lines squeal and hover and the ever changing tempo keeps everyone on their toes.

The ‘in-out-in’ rotation between the stages really plays well at non-diluting the crowd. Lennie Dies rip a hole into proceedings with a thunderous sound. Dark, crawling tones explode into a visceral beast. With each member offering vocal duties the room contracts as the slick porous walls feed this trio who’s stage presence draws you in deeper. There’s a mixture of Mezzanine-era Massive Attack beats woven through the set that only give way to the crow-barred System Of A Down onslaught.

Talking of dark, our photographer is not the only one wishing that somebody knows where the light switch is to be found. The lighting for the inside stage was, for a number of the bands, a puzzle, with only a couple of red spots swirling around. We don’t know if this was a deliberate plan, but it seemed odd, with most bands on the inside stage effectively playing in near darkness. By the time Sunflowers took to the stage at 11pm it was difficult to see anything at all.

Danye start promptly, keep the outside flowing and what a subtle yet hypnotic sound they pump out. Surprised when they suddenly stop to rounds of applause ‘It’s only the soundcheck’- indicative of how instantly they connected.

Starting for real, the trippy vibes continued. Despite the rain not letting up there’s plenty of warmth, stage direction. There’s flashes of brilliance here and certainly sonic landscapes not found elsewhere today. It’s a real shame with one song left they announce it’s their last show. Certainly one to cherish for those sticking the rain out.

The Coral: Exclusive excerpt from Into The Void, a new book by the band’s Nick Power

Mincemeat’s knee-jerking angular swagger is a fresh stance in the day’s lineup. With a few technical tweaks by the guitarist they resume service. Sure it’s nothing to do with the fact the instrument’s the smallest guitar we’ve ever seen thrashing out. A couple of minutes further down the line and the amp has had it – what follows is a rhythm funk-drive interlude whilst a new amp is brought into play, set up and ready to, just work – well recovered lads.

A little diesel and oil slicked glam gets the crowd even more behind the band. With the yelps and rockabilly vocals they’re shoo-hoo’ing their way through this set and it’s going down a treat.

Back outside and Yammerer spread like a growing infection. The slow speaking vocals add a sinister crawl that completely misleads to where the rest of the set is going. The energy suddenly peaks and the band spread their charms. They’re having a ball and it’s hard to resist. We’re reminded of Warmduscher at Bluedot earlier in the season. All snatchy guitars and irregular rhythms.

Onto the day’s compère Strange Collective – with their familiar blues-driven words of wisdom. The crowd naturally showing their love. At this late stage of the day the drinks have been flowing and the jeery-leary disciples make it known why they’re here. Shout outs, dedications and birthday announcements and all the right moves are being played here. It’s loud, energetic and blistering – as expected.

Brooding and sullen Table Scraps are the last band on the outdoor stage. Speed trash with a huge nod to metal of the heaviest variety. There’s screaming guitars wailing feedback. It isn’t really psych, but the crowd doesn’t care and they go down as one of the faves in the garden.

Sunflowers brought the modern day psych crippling under the weight of dynamism. This killer Porto duo thumped their way through nearly an hour of hair tingling riffs, more electric than a Tesla tea party. Singer Carlos de Jesus looking like a crazed extra under a mass of fizzed-out hair, swinging at one point in repeated circles. Not to be outdone, wild abandon also flows from drummer Carol Brandão sporting a crazed look of euphoria akin to the madman who unlocks the asylums cell doors simply to watch the ensuring chaos.

Sadly at this stage of the day the numbers have just disappeared. By the end of the set it’s a virtually empty room as most people here have had their fill and slumped off into the night.

That said, the day was a clear success and we need to be grateful there are people around, such as the members of Strange Collective who are prepared to put in the effort and time to organise events like this. They are the cultural heartland of Liverpool and we should be thankful for what we’ve got. Constellations may be on the move, but we sincerely hope the Strange Collective all dayer is here to stay, wherever it may land next time.

Getintothis’ top picks from the day

SPQR seem to make a habit of being first on the bill at days like this and we kind of wish they wouldn’t. Kicking off proceedings with a statement of intent, though, the three piece gave us a half hour of classy, edgy punk grooves. We still think single, Suffer, is a class tune and it really shows why the band deserves a better billing. Peter Goodbody

The Floormen delivered an outstanding set on the outside stage. Swirling guitars and lengthy beats accompanied by minimal vocals, it was a perfect lesson in how to do psych. Loved every minute of it. Peter Goodbody

Mincemeat were a band who’s sheer determination to blending genres and raw-edged shattering riffs, it seemed the eye catching ferociousness of the drummer served as a rallying cry straight to hell. Infectious and deafening. Howard Doupé

Oozing melody and sonic shoegazering vibes Danye gave us something to get lost in, a soundtrack to the mind bending. Content to work with whatever you imagined rather than stamping a new way of thinking. Tune in and gloriously enjoy the trip. Howard Doupé

The Lemonade Fix continue to impress. There’s that typical scouse swagger that’s at the heart of most things good out of the city. It’s catchy, doused with charm and wicked imagery that’s cool as. Howard Doupé

Table Scraps perhaps win the prize for the oddest band name of the night, but the Birmingham three piece gave us a heavy rocky 45 minutes of absolutely cracking moshable choons, including a 12 string guitar – been a while since we’ve seen one of those in the wild. Superb finish to the outside stage and the garden was packed for this one. Definitely the highlight of the day. Peter Goodbody 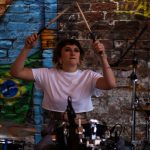 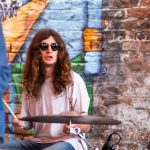 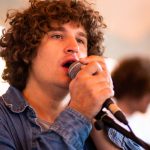 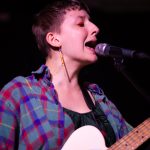 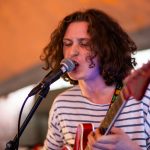 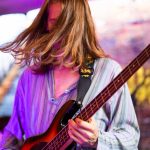 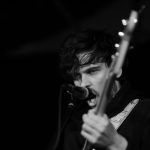 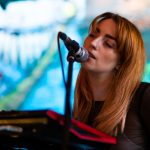 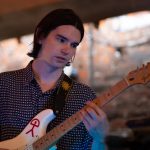 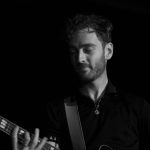 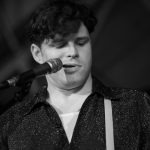 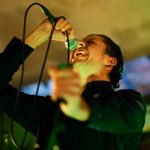 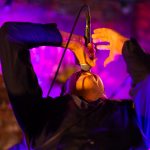 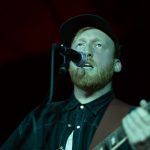 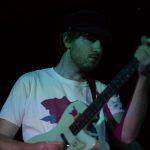 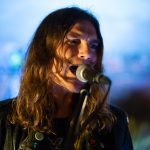 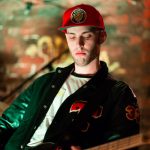 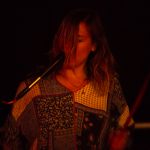 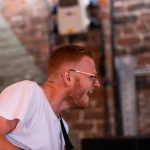