As The Membranes’ frontman, John Robb, puts on another masterclass of how to curate a gig, Getintothis’ Peter Goodbody was there to soak it all up.

It was the hottest day of the year so far. 24° in Manchester apparently.

The outdoor terraces of the city’s bars and cafés were packed with the populace enjoying an afternoon beer or a coffee in the sun. Getintothis, on the other hand, got swallowed up by the darkness of the O2 Ritz. Maybe it was the contrast compared with the bright sunshine outside, but it was still a bit of a shock to the system. We could hardly see a damn thing as we walked through the doors.

This is the second time John Robb has organised this mini festival as a showcase for his band The Membranes and a few of his mates. Last year was a triumph and expectations were similarly high for the second incarnation.

Our first band of the day was Liines. Their bass heavy, catchy, punky, 3 minute numbers doing a fine job of setting the tone for what was to come. There’s a new album out and we’d suggest it’s well worth checking out. It was a short set – 20 minutes, but full of raw edge and power. A solid start.

One Sided Horse have a kind of Levellers punk folk about them. The band is led by Evil Blizzard’s Mark Whiteside (the singing drummer) and otherwise comprises members of Embrace. Whereas the Blizz are all about theatre and shock value, One Sided Horse is very much about the songs. It’s a rich space, driven by Whiteside’s acoustic guitar but with bass and keyboards contributing high in the mix. A powerful set.

The Cravats have a wealth of material from which to draw. They’ve been around a while (since 1977) and at least 4 John Peel sessions form part of their CV. And it’s easy to see why.

Like a cross between Pere Ubu and Nick Cave’s Birthday Party they create quite a racket, especially with the atonal sax mixing things up. We can see why John Peel would have loved them. Front man “The Shend” doesn’t so much sing as bark orders; with an impressive goatee beard, trilby and tailcoat he marches around the stage demonstrating this is his domain.

Since the early days, the band’s live dates have usually included one of their number just sitting on a chair on stage reading a newspaper. Tonight was no different, although there was added banana eating. The whole thing is surreal, angry, anarchic and quite brilliant.

Evil Blizzard came on stage to the usual abuse, jeers and boos from the crowd. “It’s just music to our ears” said Whiteside before launching into Unleash the Misery. It’s an odd formula –  4 bass guitars and drums with the band all wearing masks and ridiculous fancy dress. But it works. It’s all about the performance, of course. But the music isn’t bad either.

There, we said it. That won’t go down well with the band.

We were talking to a few people outside during the gig. It’s clear John Robb has hit a winning template. All the people we spoke to were here last year for this gig and all declared it brilliant. There is a sense of camaraderie at gigs like this. It’s more than just the music, you can feel the sense of inclusiveness. It’s all very hygge, but with lots of people. It’s a safe space, with people looking out for each other.

Evil Blizzard finally manage to get a cheer when they announce “This is our last song” before bowing out with Everybody Come to Church. It’s all done with good humour and it’s all part of the game.

The Lovely Eggs, a two piece drum and guitar outfit who started off at 100mph and didn’t let up for the rest of their set, save perhaps for the penultimate one – Fuck It – a glorious slow burner of a song and an anthem for our time.  Lots of lovely garage psych and lots of lovely noise. They were a new one on us, but we bought a couple of cds from the merch stand, just because they were so good.

Although how they passed us by is a mystery – they’ve been going since 2006. But that’s part of the great thing about gigs like this. Something new turning up.

The finale is John Robb’s Membranes along with the 20 strong BIMM choir. And what a finale it is. The Ritz is rammed by now and it’s a show of strength from the band. As Robb moves around the stage, holding his bass aloft and staring at the audience we knew all roads would lead to this.

It is by now a well honed performance, but just because it’s been done before doesn’t mean it’s no good. This is special. The energy coming off Robb during the set should probably be harnessed and used to power, oh, we don’t know, something that needs lots of power. It’s electrifying and exhilarating. And it’s a damn fine thing. The BIMM choir add an extra layer of texture to the experience.

But it was a long slog. There’s nowhere to sit down in the Ritz, save the floor, and we’d been on our feet for 5 hours. The curry house was calling and we heard it loud and clear.

It was a great bill put together by John Robb. There was no filler here tonight. And that’s no mean feat. But so, too, was the chicken madras a welcome end to the night. 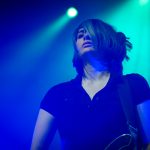 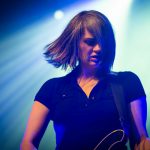 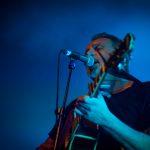 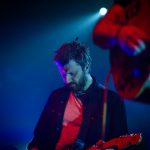 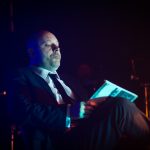 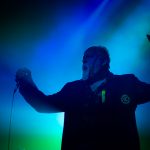 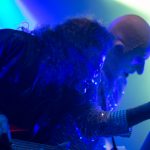 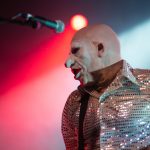 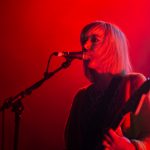 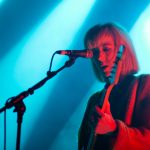 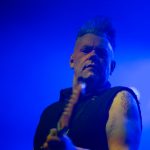 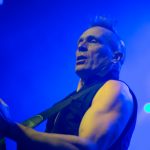 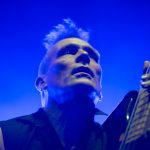 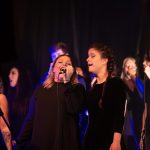 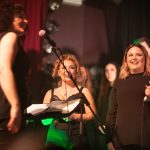