South London’s finest post-punk outfit Shame embark on their sold out UK tour and Getintothis’ Matthew Wood muscled his way to the front at District.

Winners of Impala Album of the Year award for their record, In My Head, German quartet Gurr are accompanying Shame on every leg of their UK tour.

A tune in their native tongue  gets us warmed up nicely, sharp and punchy and harbouring a sweet brand of exciting grunge pop.

It’s their first time in Liverpool and following a delayed start they soon settle into their bubbling set, quick-fire blasts of interchanges propel the set along as the crowd waits with baited breath

‘My Mama says don’t go to school’,  leads their next one lyrically and both lead vocalists fizz and pop with rebellion around a helping of heavy Weezer-style power chords, catapulting us back to our youth with their feline yelps.

They recall fellow potent female acts, Hinds and Warpaint, but with a different sense of  laying down Libertines-esque riffs and sweet harmonies, while a Will from the Inbetweeners lookalike keeps their percussive cauldron brewing.

A brief Gwen Stefani interlude draws us in before another hefty wave of garage rock sails our way and they leave us with a most fitting monster cover of Helter Skelter, following their crowd favourite, Moby Dick.

District is now a place of worship, awaiting the arrival of the South London quintet, it’s a healthy mix too, not just a sea of youngsters ready to throw some elbows.

Their debut record, Songs of Praise is frothing with live madness and Shame are certainly an act that have nurtured their explosive on stage antics.

Dust is their opener, taking our hand in their fist, squeezing tight and almost yanking our arm out of socket. Frontman Charlie Steen soaks up the crowd’s reaction early on, his arms spread expectantly almost like a Gallagher.

It becomes apparent that since our last meeting with Shame they’ve not just come to play loud and scream in our faces, that does indeed happen, but Steen’s patter gets us all in the mind set to lose ourselves for a few moments at least and he’s marking himself as a born performer, and this is before he’s taken his shirt off.

Concrete and One Rizla are clear crowd favourites, and rightfully so, the crowd washes in and out in great swathes accompanying them in their ceremony with vocal roars, Steen preaching aggressively to the masses.

Their standout number is Tasteless, a whopping great kraut-inspired jam that recalls the likes of TOY and the band’s prowess goes unrelenting with the bassist often quivering with aggression through his raspy backing vocals.

They offer up a tasty new morsel, an unnamed track that boasts their powerful concoction of post-punk and sing-along pop elements and it’s mere seconds before you align into their grain, a tad predictable perhaps, but a solid snippet of what’s to come. 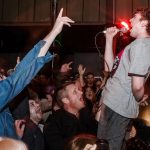 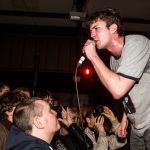 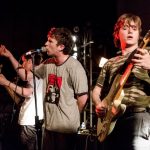 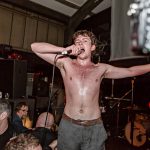 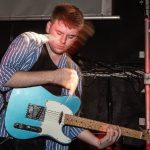 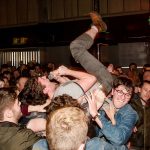 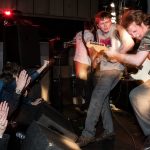 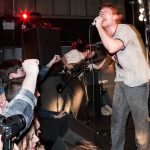 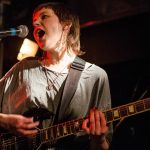 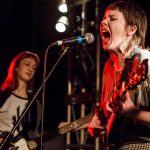 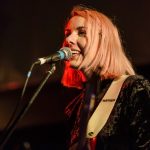 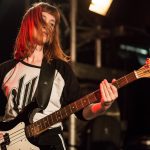 Share. Twitter Facebook Google+ Pinterest LinkedIn Tumblr Email
Previous ArticleQuickly Kevin Will He Score?: the 1990s football podcast asking the questions no-one else dares to
Next Article The mysteries of the universe explored in unique science and arts collaboration