The Handsome Family celebrate 20 years since the release of Through The Trees, Getintothis’ Paul Fitzgerald headed to Leaf for dark moods and comic bickering.

Each one of these troubled stories, though, is delivered with such simplicity, without needless fuss or distraction, that Rennie Sparks’ lyrics are able to pull the listener in to the story, anxious to find out what happens next. Another highlight of their shows, of course, is the stories and banter that come between the songs.

The perfect and often hilarious bickering of this couple, married for so long that they’ve become experts in not only exposing the other’s faults and weaknesses, but delivering them to their audience with wicked glee. The whole experience is infectious and utterly compelling, and despite the dark subject matters, maybe because of them in fact, it’s all actually quite sweet.

Their show at Leaf was no exception in any of this. In town to celebrate the release 20 years ago of the brilliant Through The Trees record with a full album show, they found a warm welcome. Liverpool loves The Handsome Family, Liverpool does moody well, the darkness of it all appeals to us.

Opening with Weightless Again, a tale featuring lost Indians in a redwood forest, dying of TB and going insane, and with a trademark hook of “this is why people OD on pills, and jump from the Golden Gate Bridge, anything to feel weightless again”,

It was an instant reminder of what we love The Handsome Family for. Brett Sparks road weary rich, deep baritone vocal, its edges worn and coloured by life’s challenges, finding its natural balance with his wife’s perfect harmonies, made these tales so familiar twenty years ago, and he’s gifted the lyrics with such beautiful melody that you could be forgiven for thinking we were hearing a much older body of work.

The Giant Of Illinois was another highlight, telling the story of the death from an infected blister of Robert Wadlow, the tallest man who ever lived. A plaintive and sad true story, it’s a song so simple in its construction and delivery, which only served to add to the starkness of the subject. That minimalism struck right through Down In The Ground, too, where Rennie Sparks‘ twisted, snarling melody sounded like someone trapped in a cave, somewhere far from anywhere, slowly losing their mind on moonshine. Disturbed is a safe place for The Handsome Family.

There were tales of their recent move to New Mexico, including an incident where their cat was sprayed in the face by a skunk, causing it to bury its face in its own litter tray afterwards. “that’s a real low point for a cat”. We felt sure we’ll hear that story set to music at some point in the future.

A truly beautiful and sparse rendition of My Ghost, the album’s closing song, brought the set to an end. It tells the story of Brett Sparks‘ forced confinement in a psychiatric unit “strapped to this fucking twin bed” following a breakdown and a bipolar diagnosis just prior to the recording of Through The Trees.

It was a sad moment, a plaintive lyric filled with loneliness and fear, yet still The Handsome Family managed to make it feel charming and sweet. Such is the way of the world with the Handsome Family. Theirs is indeed a curious world.

Earlier we’d been treated to a slick set of the dusty country blues of a man by the name of Drunken Prayer, also known as Morgan Geer. He normally records with a band, but on this tour was flying solo, just him, clad in black, and a particularly sweet sounding Fender Telecaster. A heady unsettling blend of voodoo blues Americana, Nashville, rockabilly and 1970s Laurel Canyon vibes found its place in songs of the devil and the lord, wicked behaviour and life in the backwoods of North Carolina. His set was the perfect compliment for the main act later in the night, and the Leaf crowd warmed to him well. 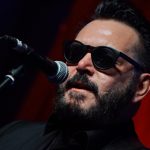 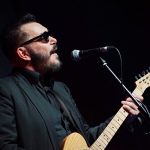 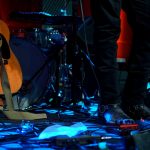 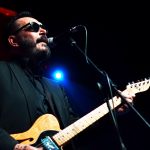 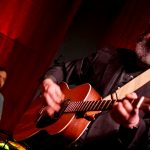 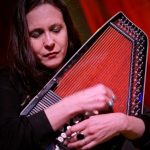 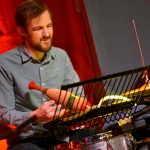 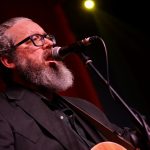 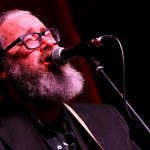 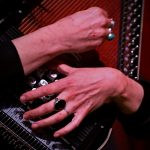 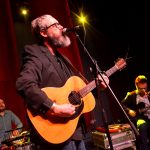 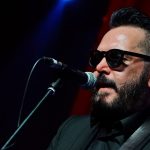