As Stealing Sheep play a show in Ormskirk, Getintothis‘ Banjo experiences a masterclass in performance art.

The beautiful thing about live music is that it never loses its ability to surprise, and tonight, Stealing Sheep were a revelation. At this Friday night’s Big Wows show, Stealing Sheep delivered one of the best gigs this writer has ever seen. In fact, ‘gig’ is just not the right word, it is too small a word for what we saw, too restrictive for what happened. This was not just a performance, this was performance art.

Where gigs consist of a band turning up to a venue, standing on stage and playing their music, this evening that was not enough. Every detail, every angle, every move was worked out and thought about. From the specially constructed stage to the final farewell, everything was considered and perfect.

As the lights dimmed, the members of Stealing Sheep entered the theatre and walked onto three discs in front of the stage. Lit by spotlight, the discs started to slowly rotate until the band were facing away from the audience when, one by one, they each walked towards one of the three tiers of their bespoke stage and stood by their instruments.

The stage itself, like much of the show, seems to be designed more for theatre than rock n roll. In fact, there is an anti rock n roll air about proceedings that this writer hasn’t witnessed since the early post punk days, when bands were looking for alternatives or antidotes to standard rock band practices, when things like this were discussed and thought about.

Having taken their places, and before playing a single note, Stealing Sheep started a choreographed routine. Not dance as such, but almost robotic movements, poker faced and unflinching, surrounded by dry ice and accompanied by a backing track. The expressionless faces and the togetherness of their movements gave all three members an almost android like quality, somehow cold and emotionless. The confidence and charisma they possess is incredible.

The work and thought that must have gone into the show before even the first note was played is phenomenal. Here is a band who have an artistic vision that obviously reaches beyond the scope of most of their peers. The attention to detail is complete, right down to synchronised head movements, lights and positioning. One number in and already all other bands look inadequate and old fashioned in comparison.

Following this, the band take to their instruments and the first song proper starts. Playing their new album in full for the first time, it is immediately apparent that Stealing Sheep do not take the easy road when it comes to their music. Nothing is straightforward here, there are no simple 4/4 rhythms or plodding basslines, everything sounds complicated in one way or another. It is almost as if each part is written separately and brought together via some kind of technomagick, but all instruments mesh together perfectly and the overall effect is a wash of sound that is more than the sum of its parts.

It is not easy to see where Stealing Sheep take their influences. At points, they seem to occupy a strange hinterland mid-way between The Raincoats and Kraftwerk, between a version of the past and a vision of the future.   Post punk does seem to be a strong influence, but they obviously have their eyes set on the future, on the road ahead.

Both Sides Now: take part in Stealing Sheep’s Suffrage Tribute at Sound City, Festival No.6, End Of The Road

The three member’s harmonies are superb throughout the show, there is a huge amount of talent on stage. Drummer Lucy Mercer is hypnotic to watch as she makes her minimal drum kit sing and often take the lead in the music they make. Bassist Emily Lansley is ice queen cool, coaxing unconventional melodies and counter melodies out of her bass, while keyboard player Rebecca Hawley creates much of the melody and is the most animated member of the band, unable to resist dancing along to the music she makes.

All through this, the detached, android like façade remains. It comes as almost a surprise to see Hawley reach for a bottle of water, as if we had forgotten that the band are actually human after all and might need to drink. Then, back to the ice cold stance of before. They thaw, of course, now and then, their human qualities coming through in smiles, glances and in the sheer emotional qualities of their music.

At the mid point of the show, the band again abandon their instruments and stand with their backs to the audience. The light screens dotted around the stage take over and futurist noise swells around us. What does that make what we are seeing? It is evident again that we have left the cosy confines of a gig far behind us. No one onstage is even moving, no instruments are being played and the band are motionless and barely visible behind the pulses of light directed our way. Yet this is one of tonight’s highlights in terms of the sheer power and effrontery of what we are seeing.

As the show draws to an end, the ice begins to melt and Stealing Sheep let themselves smile and speak to the audience. This being a seated venue, there has been no dancing from the crowd. Lansley invites the audience to dance to their last songs and it is jarring to see them momentarily come across as a normal band asking their audience to join in. Nobody takes her up on the offer, not because of the music, but perhaps because with part of their stage set being on the dancefloor and there being video cameras on either side, the space stage front seems somehow reserved or private.

Whilst this is a shame in one way, this is a show that deserves to be seen, and the layout of the Arts Centre here at Edge Hill is perfect for that. In fact the venue is proving to be something of a valuable multimedia space, hosting shows, exhibitions and performances as well as gigs. Venues like this are to be treasured and, more importantly attended. It may be a little out of the way, but you are urged to come to this venue as soon as possible, especially if they continue to host such excellent nights as this.

There is a femininity to the way Stealing Sheep interact, the way the make music and the way they mesh together. Coming only a day after International Women’s Day, it is inspiring to see everything that is good and positive about such a day being played out so effortlessly before our eyes.

After the last songs fades away, Stealing Sheep leave the stage and again stand on the spotlit circles in front of the stage. This time though there are smiles and dancing. The android persona has worn away and we are left with three very real people facing us. They file out of the theater and the audience is left to come to terms with what we have just witnessed. A gig like no other, a performance that will stay with us for a long, long time. 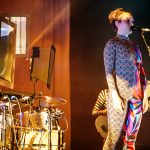 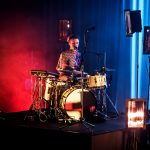 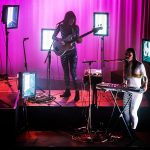 Stealing Sheep will perform at this year’s Heavenly Weekender 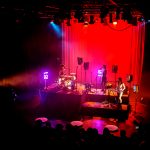 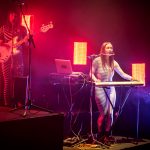 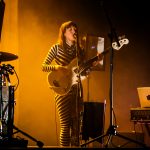