As the Australian songstress and actress comes to Liverpool, Getintothis’ Lauren Wise heads down to the O2 Academy to revel in nostalgia.

Decked out in furniture that wouldn’t look amiss in your Nan’s front room is Liverpool’s O2 Academy.
It seems apt for a Monday night, where everyone’s ready to enjoy some soothing percussion and easy upbeat tunes. And while we set in to a relaxing evening of nostalgia, we’re welcomed by support act Kiol.
The Italian 20 year old has already an impressive back catalogue of work to his name, and is certainly making his mark on not just the Italian music scene but the Irish and, now, the English one too.
Performing an easy-going pop/soul combo, he’s the ideal opener, playing Paolo Nutini-esque songs with vocals akin to those of The Lumineers or Passenger. A highlight of his performance is Broken Up Again, a hopeful pop tune with a catchy hook. Impossible not to bob about to while you’re sipping on your O2 Academy-priced ale.
After a short interval the woman of the hour (and of 1998) herself arrives, Natalie Imbruglia.
Complete with her three-piece band behind her, she begins the set with Wrong Impression, her 2002 release from second album White Lilies.
From the very first note we’re transported back to the age we were when it was released, when the singer was in her prime and when Pink’s Let’s Get The Party Started, Shakira’s Whenever, Wherever and No Doubt’s Hey Baby ruled the UK chart roost.
The acoustic(ish) set is filled out with percussion, so any drum backing is hardly missed – and would likely seem out of place if it were there. Continuing with her throwback setlist compiled of a mix of country, pop and soul, next up is Glorious, a song she dedicates to London.

See what other gigs are on offer this week in Liverpool

Clichéd lyrics might be the overtone of many of Natalie Imbruglia’s songs, but that doesn’t detract from clear talents of the multi-instrumental band able to create a tight-knit backing on which she can sing.
After all, where would she be without the clichés – surely that’s simply part and parcel of being a pop star of the noughties?
A cover of American emo-rockers Death Cab For Cutie’s I Will Follow You Into The Dark is well received, and surprisingly slides in seamlessly among the feel-good pop songs.
Of course it would be be a travesty of epic proportions if we went to see Natalie Imbruglia and never mentioned the biggie. In fact, having gone to see her only really remembering Torn, I was fully prepared for when it would be belted out by the entire audience.
The absences of the introducing strums we all know so well threw us off for just a moment, but proved to be worth it. Replaced by a melodic piano intro, the crowd was quick to catch on and it wasn’t too long before what felt like the whole of Liverpool was belting out ‘I’m wide awake and I can see the perfect sky is torn’.
While the first half of the set prepped us for the ultimate sing along, the second half lagged in comparison.
Following the climax of Torn, we knew only the covers now, although that didn’t make a difference as we watched in awe of the multi-talented musicians hopping from instrument to instrument.
Despite our cluelessness, the night was still a successful one, with a theatrical air that encouraged the crowd to dance and sing along.
Images by Getintothis’ Tomas Adam 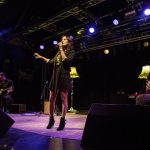 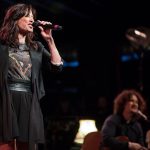 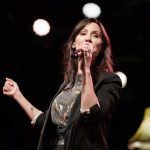 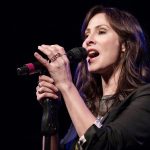 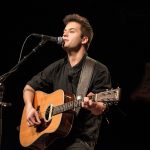 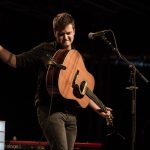