As Olivier Messiaen’s Turangalîla-Symphonie was given a rare outing by the RLPO Getintothis’ Rick Leach witnessed something truly special.

We didn’t really know what to expect when we turned up at the Phil for a rare performance of Olivier Messiaen’s Turangalîla-Symphonie by the Royal Liverpool Philharmonic Orchestra with Vasily Petrenko conducting it all.

We had a vague idea; we knew it was a lengthy and ground-breaking work by one of the 20th Century’s most innovative composers. We knew that it was scored for a massive orchestra, with a lot of percussion.

We knew that this performance would also feature the use of a rare and exotic early quasi-synthesiser, the Ondes Martinet. We knew that it hadn’t been performed at the Phil for a long time, and certainly not in this century, since the turn of the millennium.

We knew something about the background of the piece and about Messiaen himself. We’d done that much research in advance.

But what we didn’t know was Turangalîla itself. We hadn’t heard it before; we hadn’t listened to it. We had absolutely no idea what it sounded like.

This was a conscious decision. We wanted to come into it completely fresh and with as few preconceptions as possible. To listen to it as if it was the first time we’d heard it.  We could have easily dug out a recording in advance, given it a spin and therefore get some idea of what we were due to hear.

Yet that was the easy option. Better to turn up at the Phil on a Thursday evening in January and hear it for the very first time, unburdened by any excess aural and mental baggage. A clean slate if you will. Our very own premiere.

We kind of figured out that it was going to be different as it was the only work being performed that evening; no shorter pieces either side of the main attraction; and like us, for those more used to going to more, erm, traditional gigs, a useful analogy would be that there was no support act on the bill.

Settling down in our seats, we looked towards the stage. It was packed. We counted well over 80 and closer to 90 musicians on there. There were 10 percussionists alone and a 14 piece brass section. They were going to make some serious noise. There was a strange wooden type keyboard on stage as well, surrounded by three odd looking wooden cabinets; we took that to be the Ondes Martenot.

And in another different start to the concert we were treated to a 10 minute introduction to the piece by Vasily Petrenko; explaining in brief its history, what it was all about and it’s place within the Phil’s own story. You could tell he was passionate about it; there was a fervour and excitement as he went through it all, as if he needed to convince us what a great work it was.

‘It’s a story about live and time itself,’ he said, ‘Enjoy!’

Then we were off.

For us- who expected something, kind of sweeping and romantic and lush- we were in for a shock. Stephen Osborne, virtuoso pianist, hammered away on the grand piano on the centre of the stage as if he was trying to demolish it with his hands as much as play it. Nathalie Forget on the Ondes Martenot summoned up eerie and other worldly sounds and the immense string section screeched and dragged notes out of the air that you wouldn’t think were possible. The brass section stabbed and punctured throughout and the percussion-well, the percussion went like the clappers, hitting and banging and wrestling their instruments as if they’d been let off the leash.

It wasn’t a love song or a romantic tune at all. There was dissonance and clatter. It was unsettling and uncomfortable, unnerving and…it was great!

Just not what we expected in any way shape or form. Isn’t that what great music should be about-the unexpected?

Ten minutes or so in, just as we were getting wrapped up in it, the sheer noise and clamour and nearly getting into working out something (but what exactly?) Petrenko waved his baton and it stopped. Dead.

A brief pause. Dead silence. We held our breath for a moment. And then it started again.

Instead of the usual four movement structure of a traditional symphony, Messaien’s Turangalîla has ten movements. This is a good thing. You need to be able to have those small breaks because the whole thing is so intense and overwhelming and powerful that more than 10 uninterrupted minutes would be too much to take.

This is the way it went for the next 70 minutes or so. It was possibly one of the greatest musical experiences this writer has witnessed- or at least one the ones that even now, a few days after hearing it, still leaves a feeling of bewilderment, astonishment and wonder. How on earth did Messiaen bring all of it together? What vision did he have to write something so staggeringly powerful and moving?

We had hints of Hitchcock-like horror strings, elements of big band jazz, sounds of bird songs, gentle sunrises, stars exploding in distant galaxies- the pictures that are painted in your mind as this music played were endless and kept twisting and unfolding, over and over again.

Yet all that music, merely scribbled notes and scratches on staves, counts for nothing unless you have the musicians to do it justice and a conductor to weave it all into shape, and with the RLPO, Osborne, Forget and Petrenko, we had all that in spades.

There was a precision in all of what they did that was outstanding. To conjure something like that up and to clearly see the sheer enjoyment they all got out of it at the end as Petrenko punched the air as if he’d scored the winning goal in the European Cup was a moment to treasure.

They left the stage to a more than well-deserved standing ovation from the whole audience. We hope we don’t have to wait decades to see it again.

And next time, we’ll know what to expect. A bit. 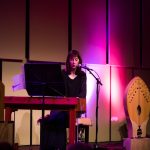 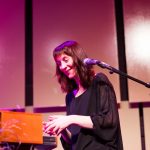 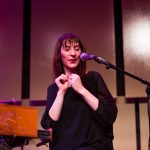 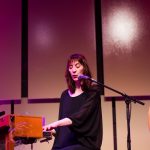 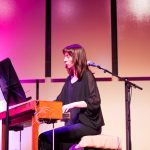 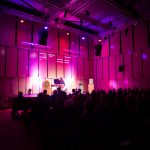 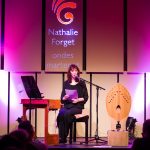