Euros Childs is back with a new album and 21 date tour; Getintothis’ Jamie Bowman braved the big freeze to watch his latest incarnation.

It’s over a quarter of a century now since Gorky’s Zygotic Mynci were formed in Ysgol Bro Myrddin, Carmarthen but you wouldn’t know it to look at their eternally youthful frontman Euros Childs.

Still only 42, Childs recently released his 13th solo album following on from the nine he recorded with Gorky’s before their much lamented split sometime around 2006 and judging by the enthusiastic and loyal crowd who attend on a freezing night in Liverpool, his status as a cultish DIY songwriter suits him just fine.

Decked out in a bright orange t-shirt, Childs resembles a recently detained Guantamano Bay prisoner as he clambers behind a bank of keyboards and begins a show which is although consistently entertaining and funny feels like something of a let-down for those who fell so head over heels in love with his previous band’s whimsical cross between progressive rock, psychedelia and country pop.

Recent single My Collander sums things up: a catchy paean to the kitchen utensil that’s perfect for draining, it provokes ear to ear grinning in the crowd and is prefaced with a laugh-out-loud story about how Childs’ ex had encouraged him to sing like Barry Gibb on the track.

So far so good but when each track follows in a similar knock-about electro-style (think John Shutteworth via Jonathan Richman) it can’t help but feel a little wearisome when one thinks of the freewheeling eclecticism displayed by Gorky’s at their best.

Assisted by the Mo Tucker-esque Rosie Smith, also known as Oh Peas!, on keys, drums and backing vocals, Childs races through a set of witty ditties from the darkly comic Happy Coma to the lightly comic Life in a Jar by way of ten year old anti-consumerist anthem Henry A Matilda Supermarketsuper (“Matilda picks out a chicken for their Sunday dinner / injected with loads of drugs in its own shit“) and, if a chuckling audience is what he is after than it’s job done, but this writer can’t help but think he’s slightly better than that.

Listen to Gorky’s songs like Patio Song, Faraway Eyes, Diamond Dew or Let’s Get Together (In Our Minds) and here was a songwriter who combined Syd Barrett-esque whimsy with a way with a tune that could tickle you heart strings as well as your funny bone. Somewhere along the line that’s been lost.

Childs finally straps his guitar on for the final few tracks and it’s a welcome relief from the incessant Bontempi beat to hear a knockabout version of Joe Fagin’s That’s Livin’ Alright but we’re sure we weren’t the only ones leaving wishing that this was a songwriter more comfortable with his past than he lets on. 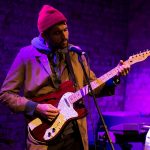 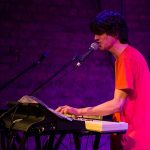 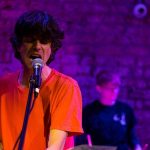