Billy Bragg’s new mini album, Bridges Not Walls is perhaps his best work in many a year.

His appearance at the Phil tonight couldn’t have come at a better (or worse?) time. He’ll always get a hero’s welcome in this city, and not just for his S*N baiting.

He speaks for the many in this city and hits a nerve with ease.

Southampton’s Seán McGowan provided perfect support tonight with self -confessed influences from Bragg, from a Solent perspective. As angry as the Bard of Barking in his younger days with themes of working class life and the struggles therein.

Bags of enthusiasm and wit make Seán one to watch for sure. Incredibly likeable.

Billy Bragg seems to appear from nowhere with his sidekick CJ and breaks into a stripped-down version of Sexuality, a rare chart botherer from 1991.

As with many old favourites tonight, lyrics are updated for comic or political effect “Don’t bother me with Morrisseeeyyy!!” is seamlessly slipped in.

It would be no surprise if the left-hand side of the auditorium had sold out first, Bragg has the political backing of all concerned and his passages of wisdom that punctuate the songs are appreciated with regular rounds of applause.

His passionate Corbyn-isms build throughout the night, as the first half is a mix of old and new, with a few love songs thrown in.

Tracks like Levi Stubbs Tears and Greetings to the New Brunette cannot fail, just bloody brilliant songs, end of. Even older songs like The Man in The Iron Mask and The Milkman of Human Kindness, bring back memories of youth to many and stand proud alongside newer material.

We hear most of Bridges Not Walls tonight and Bragg adds context to the lyrics with beautiful storytelling agility.

The story behind Saffiyah Smiles, relating to the events at the Birmingham EDL march this year, is noble and perfect subject material for Bragg. Ecological concerns are raised with King Tide and The Sunny Day Flood but it is perhaps Full English Brexit which hits the hardest.

Bragg implores us not to just shout “Racist” at Brexit voters, but to show empathy and listen so that we can understand and eventually persuade them otherwise.

The song is delivered from the point of view of a Brexiteer and is as powerful as any song in his 30 plus year career.

A song as strong as Power in a Union should have been the highlight tonight, but unsurprisingly Never Buy The Sun brings the house down and gives Bragg an opportunity to hold out a hand of solidarity.

Each chorus of “Scousers never buy The Sun” is met with applause and the song ends in a standing ovation.

It is Bragg’s long speeches that hold the audience tonight, his thoughts are timely, wise and inspiring. Often bringing some to tears.

An updated The Times They are a Changing (Back), highlights how all the good that has been done over the years on the political landscape have come to nothing and we’re back in the shit, royally.

A rousing sing-a-long New England, with a nod to the late great Kirsty MacColl ends the night on a high and despite a long show, it’s sad to see Billy Bragg leave.

An absolute hero, we salute you. 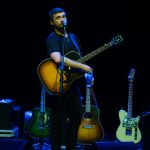 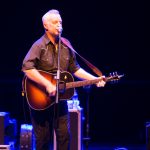 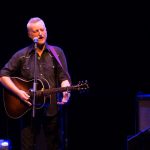 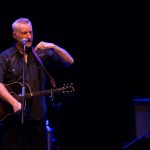 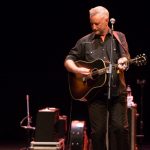 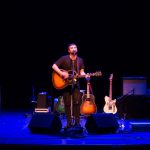