On a night of almost but almost pure indie, Getintothis’ Cath Bore experiences some unexpected Sunday sax amongst the guitar rips and riffs.

On night two of the DIY Breaking Out strand of Liverpool Music Week, first up is Emilio Pinchi.

It’s a bit of surprise to discover the Stoke born Liverpool based sensitive acoustic singer songwriter is also, on the not-so-quiet, a corporation pop-ster. Now THAT is a genre. Pinchi with a full band is jolly pleasant shock; he’s mellow and tuneful and everything flows; this side to him is worth keeping an eye on.

SPINN, on next, clean and shiny, boast a singer wearing Tim Burgess’ smile, and a gold crown cockily askew his head. The newness of SPINN is obvious, and it’s only when the aforementioned Jonny Quinn briefly ditches guitar that the band takes effect and things start to make sense. His little dance was good too. More of both those things in future, please.

When The Fernweh join proceedings after them, all of a sudden we’re in an episode of the Old Grey Whistle Test. Half expected Whispering Bob Harris to appear on stage and introduce them, to be honest. Surrounded by those with jangly guitars singing about their feelings, the booking of a prog band seems a little odd.  But they give us an enjoyable half hour, with added folk flavourings and sax to freshen and perk things up.

Of course as is ever the way with these nights, there’s the inevitable washing in and out of the local bands’ followings and accomplices, which is forever a complaint and major bugbear at this end. Full props to opener Emilio Pinchi, then, for staying put and watching all. Pass that man the crown.

Glasgow’s Spinning Coin, topping off the evening, release debut album Permo in less than two weeks, and in keeping with the record itself, the live show tonight for the most part has songwriters Sean Armstrong and Jack Mellin songs alternating, the wistful melodies of the former a contrast to the latter’s more abrasive spikiness.

There’s so many textures and layers during their set, and nods at things loved. Mellin isn’t afraid to embrace his inner rock god axe man on Magdalene, and on Money For Breakfast he gives Brian May a quality run for his money. The two men’s vocals intertwine with a gentle power; on Sides, Sean Armstrong’s eerie harmonies verge on ghostlike.

Bass player Cal Donnelly edges forward and barks out a song about identity before moving wordlessly back in place, keyboard player and new addition Rachel Taylor wigs out in her own little zone, drummer Chris White powers away at the back. Spinning Coin are unmistakably Glasgow; bursting with delicious flavourful melodies, and such very beautiful colours. And a total joy to witness. 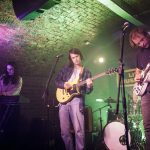 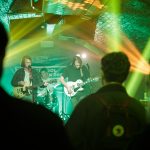 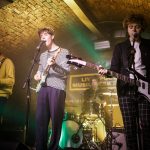 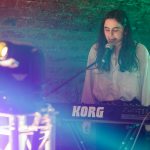 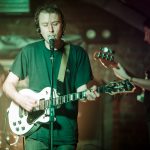 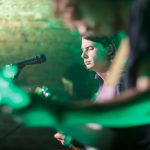 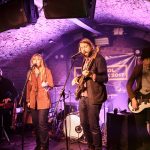 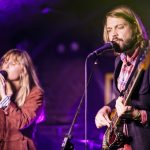 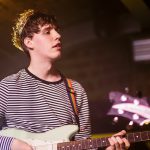 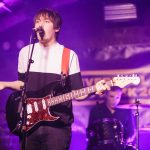 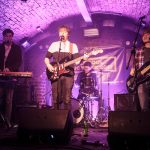