Mount Kimbie delivered a late night for Getintothis’ Sinead Nunes at the Invisible Wind Factory, torn between a belated band and the allure of the club’s basement.

A mix up in set times, thanks to contradicting event descriptions, pretty much set the tone for the second evening of events at Liverpool Music Week.

Unbeknownst to most of the room, Mount Kimbie had earlier agreed to play a second show that same night, down in London at Tate Modern’s Turbine Hall – the result was a late, late show down in Liverpool’s north docklands.

It’s an oft repeated narrative that Liverpool misses out on big acts coming to play its venues thanks to larger neighbouring cities appearing more attractive to headliners – and probably, more lucrative.

But Liverpool Music Week, our annual 10 day festival when the great and the good grace the city with their talent, is not the time to be makings Liverpudlians feel like second best.

With so much to offer already on top of LMW, Mount Kimbie’s late appearance felt like a snub.

And so it was that Mount Kimbie came late to the Invisible Wind Factory; as the crowd waited patiently for the set to begin, Merseyside-based Melodic Distraction contributor, and resident Abandon Silence DJ Tom Lye appeased the room with his ambient grooves. The revised and advertised set time of 1am rolled around, as eager fans flocked to the main stage.

‘Where were Mount Kimbie?‘

The clock ticked past 2am. Still no sign of Mount Kimbie.

Another fag break, another trip to the bar.

At this point the room felt thin; Abandon Silence downstairs in the Substation was luring punters away from the gig and into the smoky club night, rife with students, zombies and werewolves dancing manically to producer Palms Trax.

Roll on 2.30am and finally the group graced the stage.

The duo Dominic Maker and Kai Campos, flanked by their entourage of session musicians, immediately lifted the room, and the feeling in the room was one of gratitude; we’re here, you get one chance to wow us.

Launching into a succession of hits and soon-to-be-favourites from their latest album Love What Survived, Warp Records‘ Mount Kimbie played to a room of loyal listeners, framed by a beautiful red-purple-blue gradient of lasers and lights.

With their melodic blend of synths, bass and drums, the undulating beats of new songs like Delta, Marilyn and Four Years and One Day, delivered Mount Kimbie’s signature mix of blissful, electronic vibes.

It was unfortunate that by this point the room had mostly made up its mind to explore something closer to a “late night” vibes downstairs.

When they finally appeared, Mount Kimbie played well, but no encore was requested. 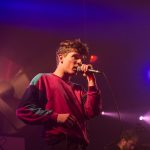 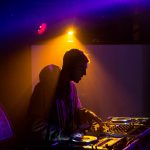 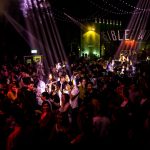 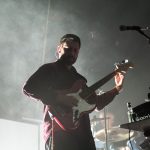 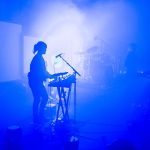 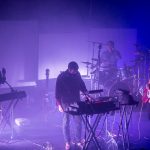