When we reach the end of the year, we’ll be seeing the name Ghostpoet in many of the ‘best of 2017’ reviews, thanks to the release of the darkly oppressive and claustrophobic album ‘Dark Days and Canapés’.

The record, his fourth, sees him charting in bleak and brutal terms, the dystopian times in which we live.

That said, its a confident and assured album which drags the listener back time and again for repeat listening. Yes, its grim, but its an undeniably sanguine work, searching for light amongst the darkness of our days.

Obaro Ejimiwe is a real presence and an enigmatic performer who, through his writing, encourages the audience to cling, with breath held, onto every word, every needle sharp turn of phrase. He prowled his way onto the Invisible Wind Factory stage in a dark two piece suit, and leaned into the mic, drawing the crowd forward to tighten them up in front of the stage, as the band came together for the opener Many Moods At Midnight, taken from the new album.

Like much of the record, its eclectically conceived, with one foot in pure on-the-one funk, and another deep in the soundscapes of Radiohead, with Ejimiwe‘s characteristic deep burr vocal stretched over the brittle spaces in the sound. The drama of heavy piano chords pierced through squealing guitar effects and the incredible skintight drumming of Tobias Humble, and it climaxed in a spiralling twisted snarl.

The set featured highlights from Dark Days and Canapés such as Woe Is Meee, led by a loose melodic bass groove, with shimmering Morricone-styled guitar chords, reverbing and sparkling through the depths of the vocals, Ejimiwe contorting himself into the mic stand almost as though it was an actual part of his being, breathing the words out into the spacial surroundings of the Wind Factory.

The scores of Ennio Morricone: a cinematic giant

Trouble + Me, a pensive, brooding introspective piece, was a true standout moment. Sparse, fragile and ethereal, it built through sweeping atmospherics, led by the piano and whispered backing vocals. It felt as though we were listening in to a deeply personal moment, almost as though we shouldn’t have been.

A moment, we’d have thought, which required the utmost respect of the crowd in at least paying attention to the performance. Not so apparently, for at least two of the audience stood at the very front of the crowd, at Ejimiwe’s feet. He called them out, in as polite a way as he could, for talking all the way through the song, and rightly so. They removed themselves the back of the room, presumably to continue their important conversation.

Immigrant Boogie, a stark and alarming depiction of the refugee crisis viewed from the inside, was an impressive but difficult standout moment. The foreboding in the lyric backdropped with an intense and bass heavy circular groove pierced with washes of guitars and keys forming the backdrop to this painful story, and Ejimiwe’s deep and factual delivery bringing visceral reality to the piece’s weighty subject matter.

‘I was dreaming of a better life, with my two kids and my lovely wife, but I can’t swim, the water’s in my lungs, so here it ends where life has just begun’

Freakshow brought the set to a close, with many of crowd deep in eyes closed dance moves, led once again by the perfectly poised oneness of the rythym section, with the guitarist whipping and wrenching a beautiful cacophonous mess of sound from his instrument, with urgent head-down determination. All the while, with Ejimiwe cavorting and flailing between the mic stand and the drums, he stirred up through the space and conducted the sound around the room, lifted and magical.

The encore came from the past with Off Peak Dreams from 2015’s Shedding Skin and was a clear crowd favourite.

Passionate and breathlessly delivered and received, with analog synth lines and a looseneck funk breakbeat, it brought wide-eyed, arms-in-the-air reverence from the appreciative room. 2011’s Survive It, with its long stretched electric piano chords hanging in the air above the heads of the crowd, was akin to the spirophonic circular breathing technique of The Last Poets or Roland Kirk such was the relentlesss rapid fire. Stone cold classic Ghostpoet.

We will look back on the Dark Days and Canapés as another classic moment in Ghostpoet’s career, and as we look towards the future, uncertain and intimidated, there’ll no doubt be plenty more.

Automotive issues getting to the venue meant that we were only able to catch the last part of Eera’s support slot. Word on the Invisible Wind Factory floor was really positive, though. She seemed to go down well on the night, and added emotive and evocative guest vocals to Ghostpoet’s Dopamine If I Do later on. 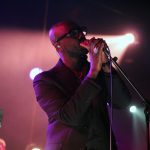 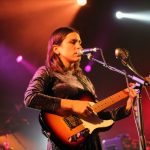 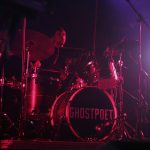 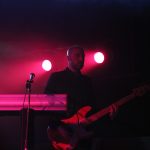 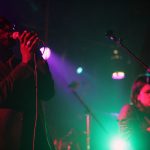 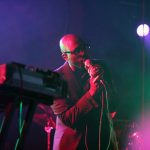 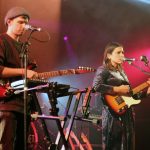