As a sizable flock of music revellers descended on a once thriving shrine of holy worship in Blackburn, Getintothis’ Mark Rowley was there to repent his sins and get down with the Almighty.

The setting for Confessional 2017 was Blackburn’s magnificent, Grade II Listed Holy Trinity Church; built in a gothic revival style and completed in the mid-nineteenth century.

The church itself, a dramatic juxtaposition of stained glass windows and pointed arches, lent an ambience of naturally saturated colour and calmness to proceedings and contributed to an immediate sense of awe and wonderment on entering.

Historically, the church is associated with vicar Chad Varah (founder of The Samaritans), and on its ceiling are painted the coats of arms of various monarchs, dating back as far as Edward The Confessor!

The Order Of Service for the evening (printed in a dainty event programme) was as follows:

The headline act for Confessional 2017 was Cabbage. Playing their third gig inside 24 hours, there was no sign of weariness or fatigue.

A buzz of expectancy was evident as band members took to the stage (a bit later than billed), and from the first note of Fraudulent Artist it was obvious that they were up for it.

The crowd responded instantly. The show was a glorious celebration of one of God’s greatest gifts to mankind: Live Music!

Thank Cabbage for enabling old punks to relive their youth and all the young dudes being treated to what was an authentic punk pummelling.

Not everyone loves Cabbage, as they have been dismissed in some quarters as a pseudo-socialist, Dead Kennedys tribute band. Well, gross inaccuracies aside, tonight none of that really mattered. Tell Me Lies was colossal and a particular highlight of an especially memorable set.

She Drew the Gun. Photo by Derren Lee Pool

Second on the billing was GIT 2017 Award winners, She Drew The Gun. Singer song-writer and guitarist, Louisa Roach was on form as ever, as the band blew away the Confessional gathering with a show of divine quality.

Kicking off with Since You Were Not Mine and continuing with a cover of The Sugababes classic, Overload, she was all smiles and clearly enjoying herself.  It may have been noted elsewhere but just in case it hasn’t; Louisa can play a bit as well!

In a set that is constantly evolving, with short rap poems leading in to both established and newer songs, SDTG sound abundantly fresh and totally relevant. Before introducing final song Pit Pony, the front-woman commented cheerily to a church full of converts, “Nice one … Is right Blackburn, thanks for ‘avin’ us in the church ‘n’ that.” No mistaking that the banks of the river Mersey is where this exceptional talent hails from.

Check out the stage times for Psych Fest – and win PZYK goodies!

Earlier in the evening, the congregation in attendance was treated to some astonishing entertainment.

Pax And The Scarlet Field. Photo by Derren Lee Pool

Local synth-pop duo from neighbouring Darwen, Pax And The Scarlet Field (along with their newly-added guitarist and third member), lit up Holy Trinity Church with their brand of synth-layered electronica, that was at times reminiscent of Manchester electro-dance rock institution, New Order.

Attending the first Confessional in 2015 as fans, they were delighted to be part of the line-up for this round of sin admission and cleansing. Including songs from their 2016 EP, Love, Hate & Curiosity such as Further Away and Blind Eye, Pax shone brightly in the limelight and did their families and friends proud.

Annelotte was unusually quite the talkative one between songs, commenting on the venue’s amazing acoustics and there being no need to request extra reverb on vocals from the sound engineer.

She also made a confession on stage to her bassist that it was indeed her who dropped the stinker he had smelt earlier and had remarked upon. Right Now, Fading Lines and It Changes (with its slacker-style verse and rousing chorus over an infectious pop melody) were the stand out songs in a set of enchanting brilliance.

Preston rockers, The Capital were unable to perform at this event, as a band member had got himself stranded in Luxembourg airport. The day was not totally lost for them however, as singer guitarist Seamus McLoughlin stepped in to offer salvation. Seamus opened Confessional 2017 perfectly, playing a gentle folk-tinged solo acoustic set, featuring his emotive and powerful vocals.

Throughout the day, we were treated to the poetic wit and intellect of Matt Abbott, (recent star of TV and a Nationwide advert). His poems were filled with acerbic slapstick humour, much of it aimed at Theresa May and the Tories. His ditty about pies and Wakefield was particularly amusing.

He performed his duty of compere for the day with the utmost professionalism. It was actually pleasing to hear someone introduce each band by name and stir the audience into a greeting of applause.

The night was ably rounded off in style by a DJ set from The Beat Chics, spinning vinyl disco hits from the 1970s, such as Chic, Sister Sledge and the like.

It would be remiss to go without a special mention for promoter, Pete Eastwood and the Confessional Team for making this a night to remember. They worked tirelessly prior to and during the event and their meticulous attention to detail was exemplary.

Just the decorating of the hall with disco balls and streamers was no small task! St Pete was name-checked by just about every band on stage thanking him for their invitation to play. He was also commended for putting on five acts out of seven fronted by female band members. There was a real friendly community atmosphere to Confessional 2017 and the vibe carried through to everyone present. And if the devil is in the detail, it is worth noting that the tickets for this assembly of 500 sinners were sold out over four months ago.

It’s a curious thing to ponder exactly what Jesus himself would make of a Confessional party. Might he be pleased to see people having such fun in a beautiful house of prayer and devotion, or could he be angered by the apparent disregard for all things righteous and hallowed?

In ancient times, according to The Old Testament (Genesis 7:12), God became so angered with his people for their debauchery, wickedness and wavering faith, he told Noah to build an Ark to take on animals; then punished all the wrong-doers by making it rain for 40 days and 40 nights. 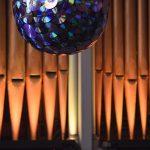 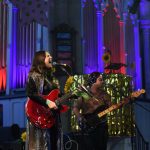 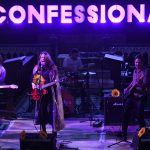 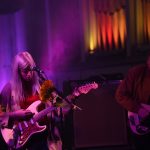 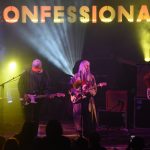 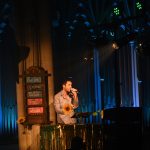 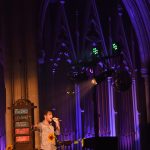 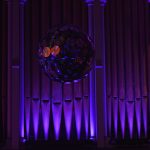 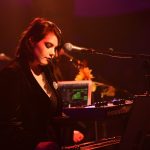 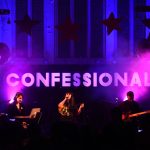 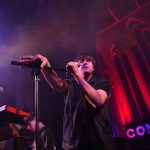 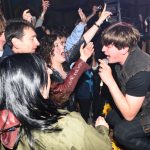 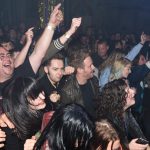 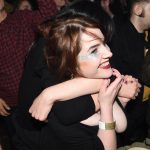 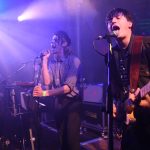 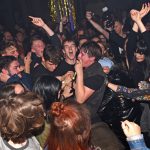 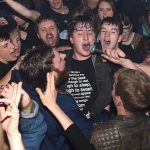 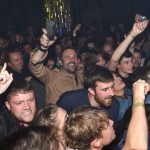 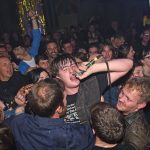 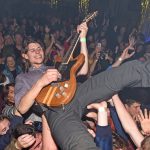 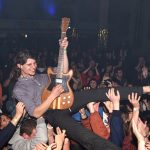 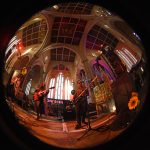 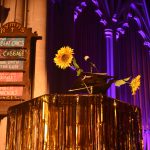 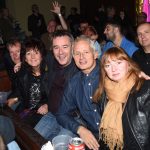 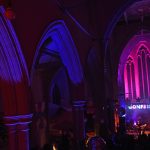 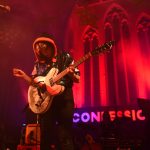 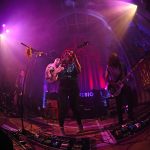