Cowtown returned to Liverpool to play a headline show and Getintothis’ Michael Edward had a mighty fine time.

Cowtown returned in style to Drop the Dumbulls following their performance at Wrong Festival earlier in the year, and were joined by a strong lineup, put together by Ohmns.

As always with shows at Drop the Dumbulls, there was an inimitable sense of community and a complete absence of bullshit to the proceedings, it was all about having a damn good time.

Opening the night was a surprise appearance from Queen Zee and the Sasstones, who due to a van- related mishap were not able to make their scheduled show with Kate Nash at a festival down south, and joined the bill at what is their spiritual home.

Ever since their addition of Dave Annis on drums (Bathymetry, Prowles), they’ve attained a level of vicious tightness that’s made them one of the most reliably raucous punk bands around.

With a business-as-usual high quality set, they lay down an astounding gauntlet not often presented by an opening act, with run throughs of the driving Victim Age and the set closer I Hate Your New Boyfriend providing standout moments.

Uncle Jane, the night’s planned openers, seemed somewhat lost in the wake of having to follow Queen Zee. Sounding like a cross between the Buzzcocks and the B52s with a country twist, they delivered some catchy riffs and punchy, shouty vocals which showed promise, but it seemed a little lacking after the barn burner of a set that proceeded them.

On the rebound – when bands replace their lead singer

The same can not be said for Leeds’ Hamer, who tear through their set of caveman garage rock with the energy befitting Thee Oh Sees or The Stooges. The frontman strikes an unavoidable presence, thrashing around the stage, teeth missing, microphone often in his mouth while he screams away.

The microphone in question? Shaped like a baby’s foot. He often finishes a line by spitting it out onto the floor, before the band kicks into another unfathomably higher gear. Closing out with anthem for the times My Brain Is Fucked, followed by an hilarious Minutemen style cover of Daft Punk’s One More Time, they leave us unsure whether to thrash around in the pit or just stare on in disbelief. They are daft punks.

Watching Ohmns at Dumbulls is akin to watching Liverpool at Anfield. They’re totally at home here, setting up their pedals in the crowd rather than on the stage, their audience feels not only physically, but spiritually close to them, hanging on their every riff.

With their regular chaotic abandon, they tear through a set that feels slightly abridged, but brilliantly effective. This reviewer was hoping that we’d be treated to the 7 minutes of insanity that was Keshi Heads that closed their set at District last month, but Paul Is Sure is a fine closer nonetheless, with Michael Quinlan’s playful lead line being particularly joy inducing.

Drummer Kingy’s stage patter can’t go unmentioned, with particular highlights including a ramble about “Custard Bush(?)“, and his announcement at the end of the set: “Next up, Samurai Kip!”

Next up, however, is Cowtown. Much of tonight’s headline set comes from their most recent, and absolutely fantastic record Paranormal Romance.

Introducing themselves with a tongue in cheek “Hello, we’re Cowtown. The non-threatening rock band from Leeds“, they rip through opening track Motivational Speaker with a wonderful sense of fun. Frontman Nash has a nervous energy that while not unhinged, is unavoidably infectious and more robotic than a normal human although less robotic than a Devo member.

Mid set they provide a highlight with the one older track in the set, Monotone Face, where Nash splinters off angular guitar figures whilst twitching rigidly from stance to stance. The rhythm section of Hils‘ bass keyboard and Dave’s lazer focussed drumming keep the energy higher than a chinchilla on speed, leading to playfully sarcastic calls from one audience member for them to play faster.

They close with a pair of new songs, both about Donald Trump’s hair, before a triumphant blast through of their single Emojicore. It’s fuzzy riffs and infectious chorus are the perfect climax to a show of pure distilled fun. They crash through the outro and end with a thick drone as nash places his guitar on its headstock feeding back, Hils drops into a crouch whilst pumping out a bassy throb, and Dave thrashes the ride cymbal with one hand, his other holding the hi hat stand aloft like a warrior preparing to lead a charge.

As we leave, our ears are ringing, and our faces are etched into permanent smiles. 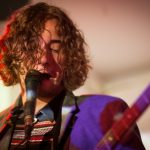 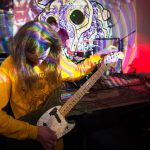 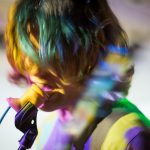 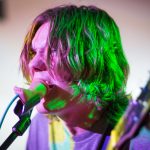 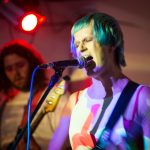 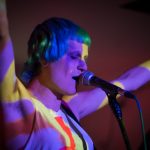 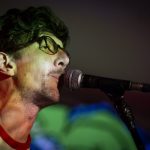 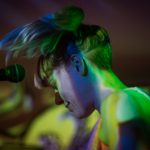 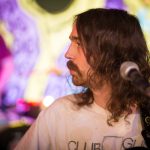 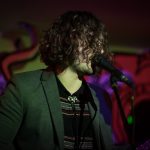