“There is perhaps no better demonstration of the folly of human conceits than this distant image of our tiny world. To me, it underscores our responsibility to deal more kindly with one another, and to preserve and cherish the pale blue dot, the only home we’ve ever known…”

Professor Tim O’Brien; astrophysicist, Associate Director of Jodrell Bank, and co-curator of Bluedot Festival channelled a charisma usually reserved for the likes of rock stars (and Jeremy Corbyn) as he read out scientist Carl Sagan’s iconic words on the main stage, introducing the entertainment-hungry crowd to the history of one of the UK’s newest festivals.

At only two years old, it’s incredible to see how this festival has grown from humble beginnings to become such an unmissable weekend.

Winner of 2016’s Best New Festival, this unique spectacle takes the awe-inspiring grounds of the Lovell Telescope as its backdrop; putting science at the heart of the festivities. Inspired by space exploration, the second iteration of the festival took environmental uncertainty as its key concept, and besides a brilliant musical line up, the theme of sustainability was clear across the programme of live scientific experiments, talks and art installations.

Bluedot’s mission statement might not be to “boldly go where no-one has gone before” – but it’s certainly pushing the boundaries of what we’ve come to expect from a muddy weekend in a tent with a hangover.

At a time where it seems as if we’re spoilt for choice when it comes to festivals, it’s become clear that there are very few promising anything new; from mainstream pop acts invading the Pyramid Stage at Glastonbury to the same names headlining what feels like every other UK extravaganza, Bluedot feels fresh.

Offering up a smorgasbord of acts and events, the festival’s organisers give visitors the chance to explore where science, culture, art and technology intersect, celebrating and weaving together each discipline seamlessly.

For those who partied too hard to make the early morning talks, excitable scientists graced the Lovell Stage between the headline musical acts, delivering impromptu seminars on space exploration, thus firmly cementing the festival’s offbeat interests within mainstream attention. From pulsars to dark matter, these short introductory explanations were pitched just right, making science and technology accessible (and interesting) to all.

On the subject of science, talks ranged from the obvious (Mike Jones: Why You Should Believe in the Big Bang), to the unexpected (Penny Sarchet: Do Animals Like Music Too?); and the political (Angela Saini: Science and the Patriarchy), to the environmental (Richard Bretts: Can We Live with a Warming Planet?).

Whether you’re interested in dark matter or the dark web, there were sessions to suit every festival goer. Of particular interest was Saturday’s Arts-Science Panel: COSMOS, which featured representatives from Jodrell Bank, Abandon Normal Devices (AND) and Tokyo-based DJ and artist Daito Manabe, who worked with artist Setsuya Kurotaki on a new commission for the festival.

The session explored how the Jodrell Bank / AND annual residency enables art and science to come together to create a nightly audio-visual installation for the festival, and why it is so important for arts and culture to address critical scientific issues. Throughout the residency, these multimedia artists learned about the telescope and the astrological data it collects (from star birth to the fading glow of the Big Bang), to inform a brand new piece of work, using the telescope as canvas.

Elsewhere, science and space continued to be as much of a draw as the music. Science lovers were welcome to explore the Jodrell Bank site, from tours of the space centre, to the permanent features, including exhibitions, “whispering dishes” and other interactive child-friendly sculptures.

The planetarium in the Star Field boasted a programme of 30 minute cinematic experiences, a highlight of which was an explanation of matter, and how plants, animals and humans are made of the same dust as stars.

Throughout the weekend, the Mission Control Workshop space was open to technologists of all ages, with soldering demos, VR experiences set on Mars, robots, 3D printers, Back to the Future’s DeLorean and workshops using conductive thread to create circuits on tote bags.

So what of the music? Much of the line up fell into the category of techno/electronic, but within this field was a broad multitude of very different artists, bands, DJs and producers. Leftfield packed out the Orbit Stage early on Friday evening, with a set featuring their debut album Leftism, from start to finish. Pioneers of the UK House scene, these dance veterans didn’t disappoint when it came to performing the album 22 years after its original release, despite their strangely early 6pm slot.

Headliners Pixies changed the mood up with their unique brand of alt-rock, blended with psychedelia. Musical stalwarts such as these know they need to keep their most loyal fans satisfied, and the set comprised classics, catalogue rarities as well as newer songs from the band’s latest release, Head Carrier.

Friday’s late night programme was particularly hard to navigate, with Henge, Vitalic, Mr. Scruff and Space Cassette DJs all performing around the same time. Somehow, this reporter managed to catch a bit of each, with the Libra Records-signed Henge’s self-proclaimed Cosmic Dross delivering ultimate rave-worthy bangers, and Vitalic’s French electro-dance musings the stand out shows.

After a slow start to Saturday, (who can blame us, after the previous evening’s packed schedule), an unexpected treat came from energetic indie group Plastic Mermaids on the Orbit Stage. Featuring an eclectic and experimental mix of instruments and styles (a violin bow drawn across a bass guitar, loudspeakers projected through the microphone), the group left nothing to dispute in terms of technical ability, as each member darted their way around the jam-like instrumental set up, swapping roles and building interesting new sounds with each song.

Later, Factory Floor proved to be one of the festival’s highlights, with a set comprising gorgeous, pulsating, colourful visuals, crowd pleasing anthems and one of the busiest dance floors of the weekend. Nik Void and Gabriel Gurnsey delivered stark, ultra-minimalist and eerily soulful tunes, bearing the unmistakable hallmarks of hypnotic repetition and punk intensity. Of late, the duo have undergone an intensive period of musical activity, with seemingly non-stop live performances and collaborations, as well as solo projects which have pushed the limits of the band’s sound.

The indisputable performance of the weekend was that of Orbital, on the main stage. Standing before the Lovell Telescope, wearing their signature head torch glasses, the pair dazzled a packed out pit of frenetic fans with a show that paired trippy, kaleidoscopic visuals with the loudest, most energetic electronic set imaginable. Hallucinatory black and white shapes pulsated across a wall of gigantic screens which covered their decks as well as the backdrop to the stage, and each song welcomed a new treat for the eyes, from confusing collages to a stripped back sunset. Top tracks included classics such as Chime and Forever, while a cinematic rendition of Satan had the whole site screaming along to the beat.

And of course, headlining a science festival wouldn’t be complete without a nod to science fiction. Half way through the set, brothers Phil and Paul Hartnoll were joined on stage by the BBC’s Radiophonic Workshop to present a club-tastic reimagining of the beloved Doctor Who theme tune – complete with tardis-spinning visuals. Soulwax and Nightmares on Wax provided another night of dance delights, but nothing could match up to the headline act.

Sunday: the time at any festival where the multitude of people start to get to you, as the two-day hangover kicks in, and your lived-in tent begins to reek of the weekend’s adventures. Luckily London-based producer Ryan Lee West (Rival Consoles) was on hand to perform his nocturnal-inspired electronica. Known for making synthesisers sound human and atmospheric, Rival Consoles went off with a bang, as his gorgeous monochrome AV set up, reminiscent of Kurokawa’s unfold at FACT last year, proved the perfect pairing to the creative audio output.

Deciding to forgo Warpaint in favour of Shobaleader One, after their dull set as part of Liverpool Music Week last November, was another of the festival’s unexpected treats. Four space-suited, LED-wearing musicians commanded the crowded OrbitStage tent with their fast-paced beat-making, with the Algorave (Mission Control Stage) seeming too tame in comparison. Meanwhile, on the main stage Alt-J delivered a fantastic set, with beautiful renditions of songs from their three hit albums, with an emphasis on their much-loved and best known debut record, An Awesome Wave.

Andrew Weatherall and The Comet is Coming wrapped up the night across two stages, with Weatherall’s two-hour set giving ravers exactly what they wanted out of their final night at the festival, and TCIC’s unusual jazz-infused soundtrack to the imagined apocalypse entirely in keeping with the “end of the weekend” feeling.

For those needing a break from the sights and sounds of the main stage and dance tents, the festival boasted a packed programme of artistic happenings across the site. Each night, Liverpool’s Kazimier team unveiled performance project Night Chorus, housed in the Arboreum’s lush forest, featuring a mirrored laser-throwing crow’s nest “eye”, while Walk the Plank’s pyrotechnics promised late-night entertainment once the music stopped.

My arts highlight though, had to be Miracoco’s Luminarium. In spite of an ever-present queue, this inflatable, architectural labyrinth of tunnels and domes enveloped explorers with light and colour. Queuing for 45 minutes was worth it by the time visitors entered the structure, navigating a maze of soft-walled routes to recline and relax in the chambers of the stunning environment. Dodecahedral domes, redolent of the Lotus Temple of India throw iridescent lights around the space, using only natural light from the sun to create the unbelievable colourful glow in each recess.

The atmosphere at Bluedot is one hard to recreate; the relaxed festival vibes were characterised encapsulated in the glowing full moon all weekend, while the constant sunshine made for the perfect summer camping trip. The festival site is small and contained, but manages to offer up a multitude of activities from the aforementioned, to tranquil yoga and gong bath sessions in the Elevate zone. Whereas themed areas on some festival maps can seem like a bit of a stretch, Bluedot is easy to navigate and the lay out is simple: visit the planetarium in the Star Field, the Lovell stage next to the Lovell telescope, (although the number of astrological words on directional signage can become problematic if you don’t know your Orbital from your Orbit Stage).

Regrets? Missing out on Dream Wife and Hawkwind due to timing clashes was disappointing, and it would have been worth seeing a few more talks, but with so much on offer, we leave feeling sated. And you know what else? It didn’t rain until the tents came down on Monday morning.

5. Tim O’Brien – academic extraordinaire, this one’s in with a chance of being the new Brain Cox

4. Lovell Telescope – still upstaging most of the programme, a true feat of scientific genius

3. Factory Floor – this perfectly-timed set from the duo restored my faith in Nik Void’s talent, after a disappointing show at Liverpool Philharmonic’s music room

2. Luminarium – a once in a lifetime festival experience

1. Orbital – there’s no competition when it came to the musical line up, and these dance music veterans are still showing newbies how its done. 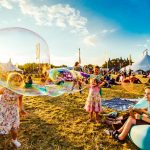 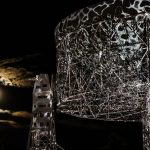 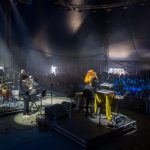 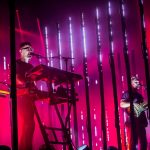 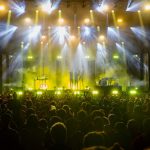 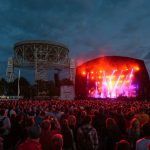 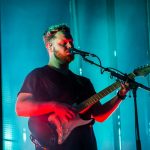 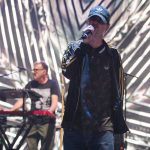 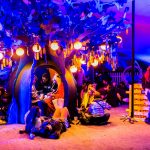 Wishing Tree within the Blue Moon 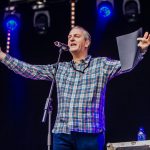 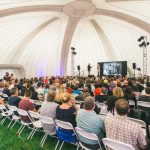 Secrets of Dr Who 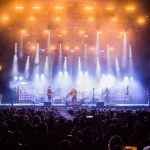 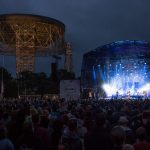 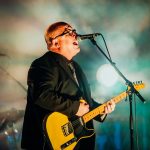 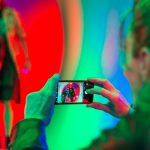 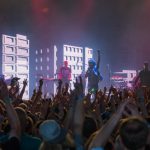 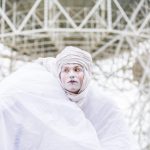 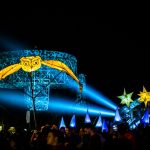 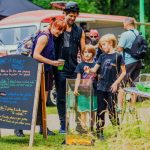 Family make a pledge to save the planet 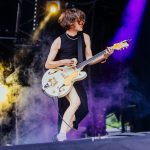 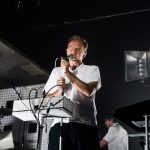 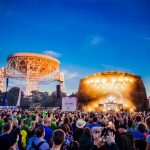 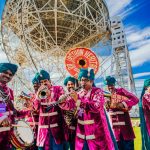 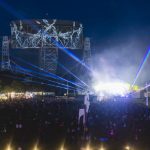 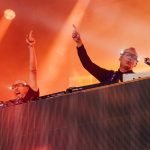 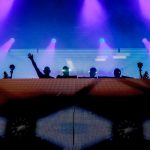 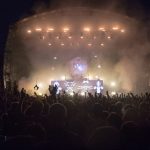 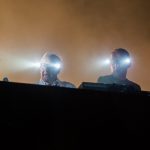 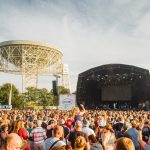