As New York electronic artist Nicolas Jaar takes the genre to the next level, Getintothis’ Amaan Khan watches an up and coming master at work.

Live concerts are more than just recreating the records in the vibe of devoted fans and tonight Nicolas Jaar gave exactly that lesson at Liverpool’s Invisible Wind Factory.

The minute the screen urged the audience to dial a toll free and put it on loudspeaker, filling the room with soft dissonant tones from the phones amidst the audience’s bewildered murmur, we knew we would be witnessing some uniqueness. This was a gimmick pointing to a whole other level of public interaction.

Dial the number to begin the concert

What followed was a dynamic set of smoothly varying music aided by some spectacular lighting. We are talking of lightsaber like decorations with their dancing lights and floating beams of light  amidst the usual projection on screen and lighting the crowd.

The music itself was a well put together show of varying dynamics. Sometimes relaxed to just atmospheric levels and then with a drop at the perfect place rising to hard hitting in-your-face beats. Jaar himself would exchange his duties – mostly focused on his set of electronics but would step out of his contraptions to carry out some vocal duties and at a point even spicing it up by playing a weird saxophone.

What could be classified as largely a dance concert was in good proportions sometimes sounding akin to modern day Kraftwerk and sometimes a Radiohead side project. Even audience behaviour lay somewhere between a dance rave to a usual ‘let us be as near to the stage as possible’ type of concert.

Partitioning the venue in the centre worked out well in consolidating the energy, though we did miss the Invisible Wind Factory‘s fan blowing smoke on the audience – the substitutes just won’t do.

Even though Jaar played a proper full-length set with encore and everything, it felt like it ended too soon and we could have easily taken in more – a clear indication that when he comes back to the town, we’ll be there again. 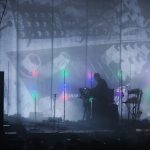 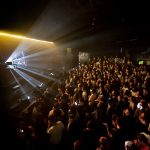 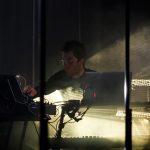 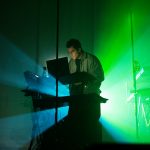 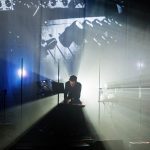 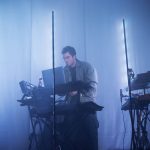