The Museum of Backward Hats

The Museum of Backward Hats punked up a revitalised District and Getintothis’ Banjo is there and not just for the beer.

Liverpool’s live music scene would seem to be in the rudest of health lately, with Sound City still a vivid memory, this weekend’s (at the time of writing) Africa Oye event set to be a sunny success and LIMF on the horizon.

As well as this there are countless smaller nights with excellent local bands in the city’s many clubs and bars. Tonight is such a night, as Three From Above and The Museum of Backward Hats take to District’s stage.

Situated in the Baltic Triangle and famed for its urinals featuring open mouthed images of Donald Trump, District has had a bit of a makeover. Moving the bar has helped join the indoor and outdoor spaces, but the main difference is the outdoor bar offering, at last, a selection of draught beers. No more £4 cans of warm Red Stripe, but a chilled glass of craft lager. Happy days.

The first band on tonight are Three From Above, who feature members of Generation and Gentle Scars in their lineup. If this makes TFA appear to be something of a hobby band, they certainly don’t sound like it. While waiting for the band to come on, a fellow punter told Getintothis to prepare for some punk rock.

Now whilst they certainly have punk attitude, they are a band who defy easy categorisation. Their songs have roots in blues, good old rock n roll and all points forward. Hints of a younger, cockier Kings of Leon or a better looking Royal Blood reveal themselves.

Opening track White Fang attacks the audience from the start. Three From Above songs are well put together, with plenty of stops and starts and proper endings. The fact they’ve only been together for four months is nothing short of amazing.

Their pace and the quality of their songs sadly dip at the end of their set, and the ill-advised bass and drums cover of The Smiths’ How Soon Is Now still has an air of the rehearsal room about it. It may have been fun when the band were messing about but this does not transfer to a stage. But this is nitpicking really, and their set was, for the large part, impressive and it is easy to imagine them commanding bigger stages in the short term future.

The headline band tonight are The Museum Of Backward Hats, who are… how can we put this tactfully, erm.. more mature than their support band. In fact the evening could be seen as a battle of youth vs experience, as the biggest difference between the two bands is age. It certainly isn’t power, The Hats, as we believe their friends call them, make a mighty noise.

Tonight’s gig is being held to launch their debut EP, Melancholy, and positive noises are being heard about the band. It is easy to see why, as the title track from their EP easily lodges itself into the brain and is easy to whistle on the way home from the gig.

The more punk of tonight’s two act is definitely The Hats, driving and melodic, theirs is a sound designed to get toes tapping. Vocalist Brian Chute’s vocals occasionally bring to mind John Lydon, or at least Psychedelic Furs’ Richard Butler.

They carry off a headline set well, perhaps their experience giving them an edge here. Brian and fellow guitarist Jed O’Toole work well together, creating a wall of sound on top of rhythm section Nick Davies, tonight resplendent in white shirt and Nehru jacket, making him look like a glam rock vicar, and Stu Cheetham, who together make a solid base for the songs to travel on.

It will be interesting to see where The Museum Of Backward Hats go from here. One gets the impression that this is just the beginning for them and their sound will progress nicely. Definitely one to watch. 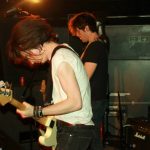 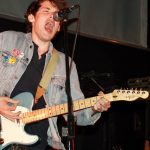 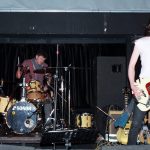 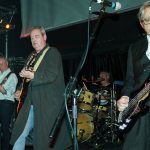 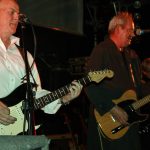 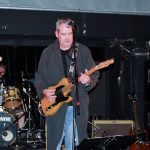