Graphic Novel God, Alan Moore heads up 14 hours of spaced out shenanigans at The Florrie, and Getintothis Del Pike dropped out then dropped in to explore a whole world of strangeness.

This time it is a 14 hour Happening, 50 years on from the iconic 14 Hour Technicolour Dream at London’s Alexandra Palace.

It was the intention of Greg Wilson, the mind behind the Super Weird Substance record label to re-create an event that would inspire and enlighten through music, art, literature and interactivity, and this, his sixth Happening, has not failed to deliver.

When we arrive in the afternoon the sun is shining, there are kids running about and at last it feels like the summer has finally arrived. In the garden people are drinking beer outside, oh yes, the dark days are over.

Inside and out there are hats: fine, fine hats, and make up, and people dressed as animals and mermaids. There is magic in the air and The Florrie, with its many nooks and crannies is the perfect place for such an event. There is a corner shop that emits screams and white noise and sells ideas rather than groceries, and a strange chapel up in the tower where we are dared by a “Rose Lady” to enter. These things are just as important as the music in creating a blissed-out day for those with the imagination to believe.

Music is happening everywhere, up in the rafters we catch The Private Sector an agit-prop band from “Down South”, preaching to the converted. Extreme left wing politics run through every song with dramatic images projected behind to hammer home every point. Over Bodies, Minds and Souls we are subjected to graphic images of factory pigs and childbirth, strong stuff. There is humour too though in bizarre juxtaposition lyrics and fat squelchy samples, including an inspired soundbite from Derek and Clive.  They are brilliant.

Down in the almost claustrophobic confines of the room they call Paper Sun, Samurai Kip are charming the pants off the packed crowd with their tight tunes and exuberance. They have some great tunes and are right for the tone of the day.

Tom Low, a more than familiar face now takes the stage under a new name. This is the first gig for TVME. It’s business as usual to be fair, some new tunes but this is still the Tom that we have come to love over the last couple of years, and the set is full of the quirky tunes and melodies that we want to hear.

The room empties and fills sporadically throughout the set which is irritating for them, but there is so much other stuff going on its to be expected. DJ / producer Youth (Paul McCartney / The Verve / Shack / The Orb etc) is doing a set, up in the rafters while Levi Tafari is delivering his poetry in The Dingle Be-In, and there is fine pizza to be eaten. You can’t be everywhere at once.

Perhaps the centre point of the whole day is a discussion with Alan Moore. Best known worldwide for penning two of the most read graphic novels ever, Watchmen and Killing Joke, and responsible for such landmark texts as Swamp Thing, V for Vendetta, From Hell, The League of Extraordinary Gentlemen and Promethea, it is a timely appearance. One of his most celebrated collaborators, comic book artist / colourist, John Higgins (Judge Dredd, Swamp Thing, Killing Joke, Watchmen) is currently the subject of a retrospective exhibition at Liverpool’s Victoria Art Gallery and Museum.

Get ready for this year’s GIT awards

With Youth firing the questions, the subject of those great works is virtually absent as themes of magic (Magick) and science take over. Moore is inspiring, particularly to the writers and artists in the room. Putting in place the idea that “Mythology is more real than all this stuff”, it’s a strong starting point to illustrate how we can all transcend the bullshit of life and be what we want. Before long we are convinced that “Science is indistinguishable from magic”

Moore relates to us by ensuring us that it is absolutely fine to have writers / artists block and ‘Fear is nothing but self-indulgence‘“or put more simply ‘We’re all lazy bastards‘. We are told that there is no point indulging in our fears and desires when creating art because no-one cares about these things ‘You may as well be having a good time until the piano hits you on the head.’

Moore comes across as a genuinely nice guy who thinks that Sleaford Mods are brilliant. We see him throughout the day chatting with fans and a lot of children and he clearly is genuinely sound at heart.

He finishes the talk by urging us to embrace authenticity rather than re-hash old ideas, and that this mad time we are living through is ripe for creating a new counter-culture ‘When bad stuff happens, art and culture kick in.’ Moore assures us that ‘The things that are most popular are usually rubbish, stand up for what’s important, not popular.’

Much of what he says is applauded and it soon becomes clear why his books are so incredible, with a mind like this its unavoidable.

Moore is a hard act to follow, but The Tea Street Band try their best. They’re a great band but perhaps not out there enough for this event. Projections of Jodorowski’s The Holy Mountain (Goats, male genitalia and white hats) help to make them feel at home, but they still feel a little out of place.

Nick Ellis taking up residence in the living room size Atlantis space works much better. Sitting at the artist’s feet, gigs don’t get more intimate than this. Ellis is really crafting his art now and should be better known outside of the City. This is a perfect performance from our own man in black.

Room 23, next door has been a continual space for political posturing and crazy performance art and is virtually impossible to get into. A Yorkshireman with a giant turnip exits the room at one point and it feels normal.

As the darkness rolls in, The Super Weird Society which includes 1950s style girls in polka dot dresses and a dancing Mandrill keep the party going in the Rafters, before Greg Wilson plays his set into the early hours, and down in the basement (The Undergrowth of Wonder) it feels like an office disco, with Eurythmics sitting comfortably next to Chaka Khan.

AGP are playing in Paper Sun balancing some sublime 60s themes with classic 80s indie. Strong vocals help to drive their material and a lengthy rhythmic outro to their closing tune is incredible, proving there is more to the band than we might first imagine. Echoes of Early Cure and Ride swim in and out of ploughing guitars and they leave us wanting more.

Our last act tonight is Esa Shields and what a way to go out. Deep reverb hides any lyrics that Esa sings but it doesn’t matter. She makes the Atlantis space feel genuinely underwater. What vocals can be heard nod pointedly to Broadcast and the Ghostbox artists, and the addition of a bass player half way through the short set brings forth another dimension that is shimmering with beauty. Esa is exactly the sort of artist who should be here tonight, encapsulating psychedelia, wonder and magic.

Bernie Connor is setting up for one of his killer sets while Strange Collective reveal to another unsuspecting audience just why they are the Liverpool band to watch this year, setting Paper Sun alight. Kids are still running through the corridors, other kids are still operating a tuck shop from the reception desk and beautiful music fills the air around the pizza van.

This has truly been a day to remember and we can only hope that it returns next year as you can never have enough magic in your life. 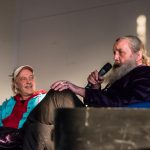 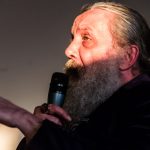 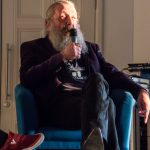 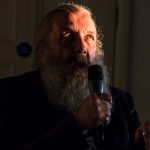 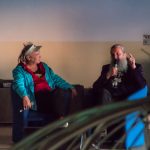 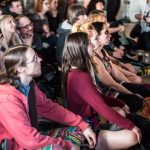 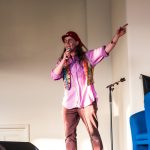 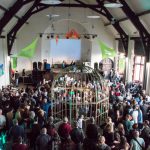