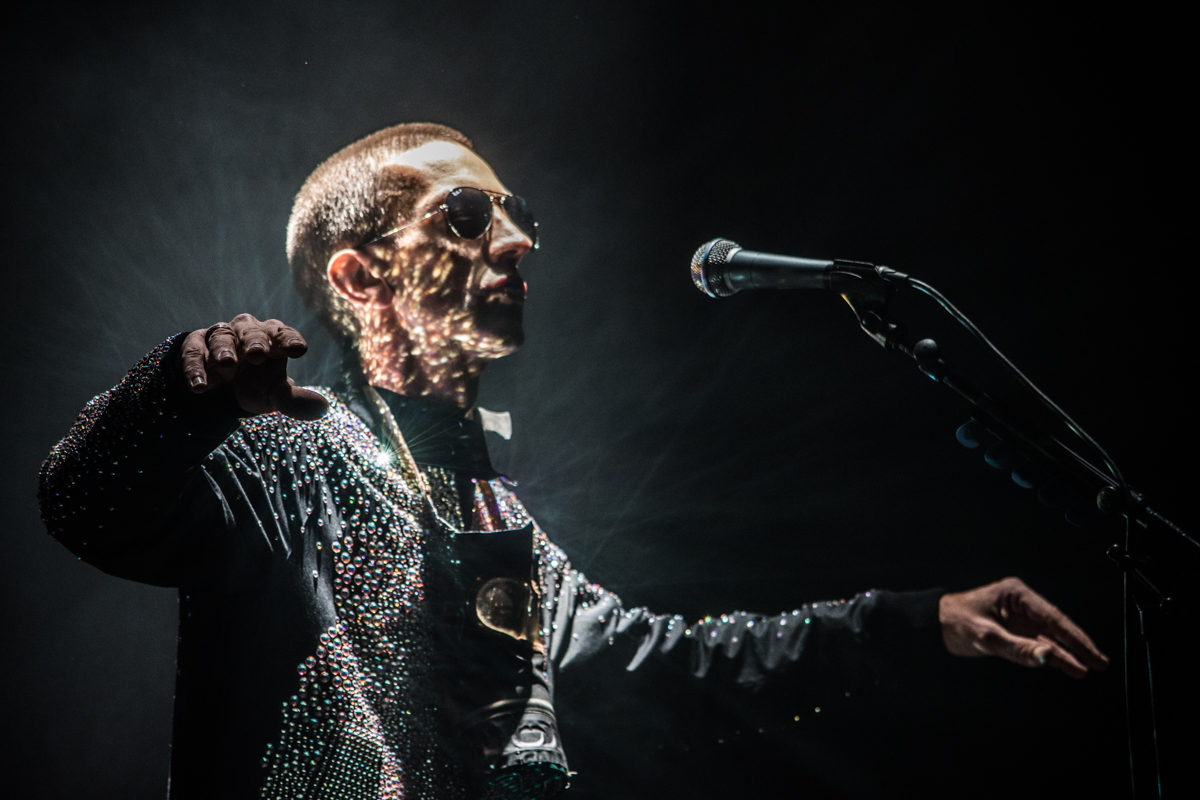 DJ Wayne was tonight’s support. No-one was quite sure who he was, “Who the fuck is DJ Wayne?” a frequent refrain outside the venue, and on social media over the course of the afternoon.

As it turned out, he just DJ-ed for two hours, we presumed he was on because of the evening’s orchestral set up. But it wasn’t the warm-up many in the audience were expecting. The nostalgia heads – of which there were many – seemed a bit sad, hoping for a name in disguise instead.

Richard Ashcroft made one heck of an entrance, when he eventually took to the stage. We were pre-warned about the gas mask, hung around his neck like a trophy on a boisterous stag night, but not the full-on glitter bomber jacket, visible from space. And shades don’t automatically make you a rock star, but they do help. He didn’t say much, but bigged up the local landmarks, 69a, the Probe record shop and delved back into the days of his youth visiting Liverpool in 1980s, remembering the Flip clothes store on Bold St.

The gig was billed as a celebration of his finest songs, with The Heritage Orchestra, conducted by Wil Malone, who worked on arrangements on The Verve’s Northern Soul, Urban Hymns and his debut solo album Alone With Everybody. The Orchestra has worked with Anna Calvi and Bjork over the past eighteen months, but also Pete Tong.

Orchestration on pop records is all very well when done with subtlety and grace, and for the most part the orchestra was pleasant enough over the course of the show. Ashcroft’s trademark sound is dense with strings anyway, so it’s not too much of a stretch, and on some of his solo songs tonight, in particular the title track from new album These People, he sounds more like The Verve than The Verve.

The Drugs Don’t Work was performed acoustically, just Ashcroft’s guitar and vocal, before the rest of the band plus orchestra, “the full monty”, go all out, full on and bombastic. A prime example of when the addition of strings do not automatically class up a performance,

Songs from the new album These People are received warmly, but it’s the big The Verve signature songs in the form Sonnet and Lucky Man, that make the men of a certain age around the Echo Arena clutch fists to their chests, totes emosh for youthful good times.