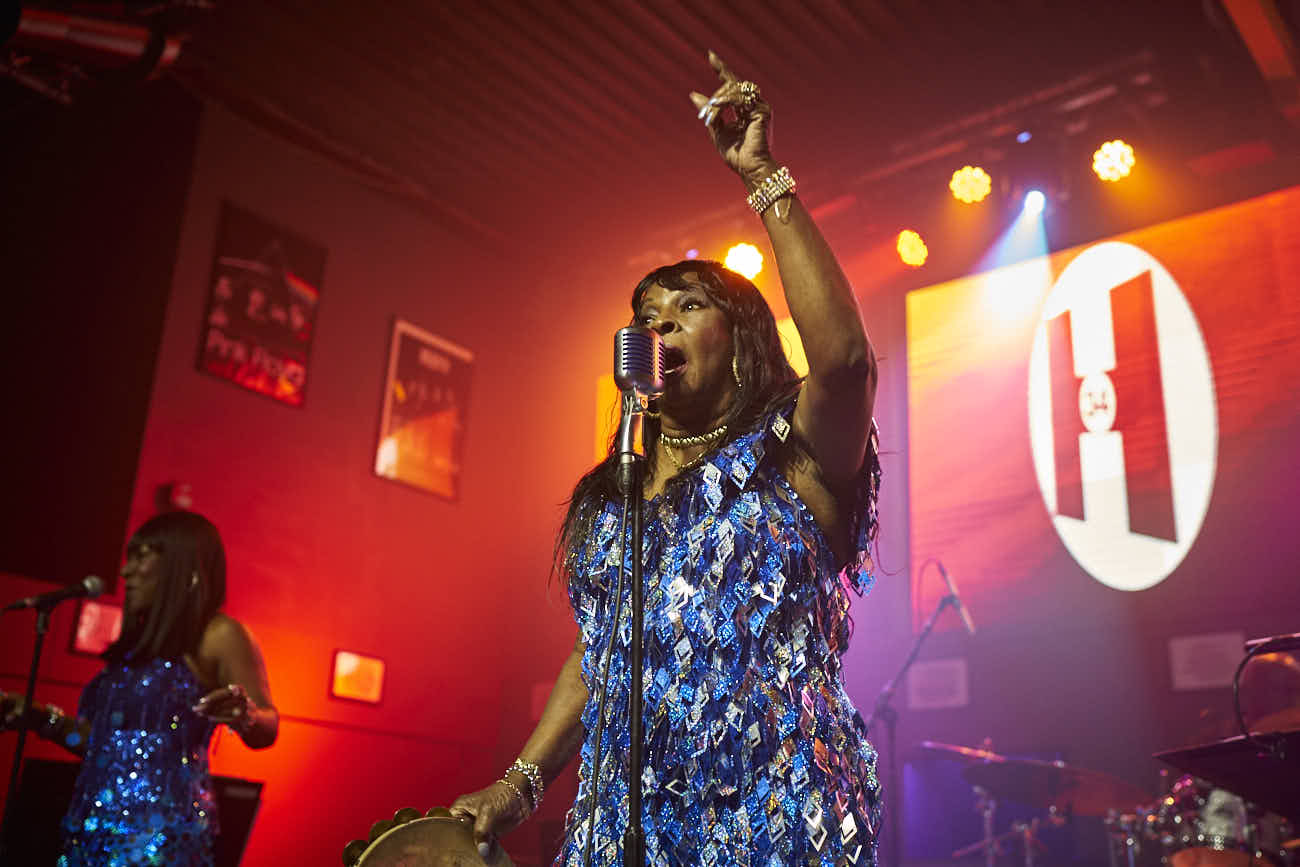 The first gig in the new Hangar 34 is a Motown legend, and Getintothis’ Shaun Ponsonby was on hand to bear witness.

If there are two things this writer loves, it is Motown and 60s girl groups, so the idea that I would miss tonight is absurd.

The Motown girl groups were designed to be glamorous and classy. Think of the Supremes or the Marvelettes; elegance in abundance. The Vandellas had that too, but Martha Reeves always seemed tougher. She was probably the closest Motown ever had to The Shangri-Las‘ Mary Weiss or Ronnie Spector of The Ronettes.

She makes her way to the stage tonight with her Vandellas, all decked out in sparkling blue dresses. That attitude unchanged since the 60s.

She was in a chatty mood, and spent a lot of the night joking around and telling stories, including eliciting one of the biggest cheers of the night for gushing over the bargains she got in Primark. You got the idea that she would be fun to just sit and chat with.

Halfway through the set, she summoned her manager, who brought out glasses of wine for each of the group, which was somewhat emblematic of the laid back nature of the set. A far cry from the highly stylised routines the Motown groups provided in the 60s, but more in-keeping with the venue and set-up of the Vandellas in 2016.

There were a few classics missing. I’m Ready For Love, Quicksand and Third Finger Left Hand in particular were notable by their absence. But, who is going to argue with a set that includes Jimmy Mack, Nowhere To Run, Heatwave and Come and Get These Memories?

They also off-set this with some deeper cuts, such as 1972’s album track No-One There, and the relatively recent Home To You, which proved how much Martha’s voice suits blues and jazz these days.

Naturally, they saved Dancing In The Street until the end, and made us smiling by shouting out those who had covered or performed it at some point (Mick Jagger, David Bowie, Van Halen, David Lee Roth, The Who, Dusty Springfield, The Mamas and the Papas – “I love me some Mama Cass!”), and there was barely a body that wasn’t moving in front of the stage. Of all Motown’s hits, you could argue it is the ultimate anthem of not just the label, but possibly even the era.

There is no way you could leave the building without a smile on your face.

For tonight’s support, The Soul Rays, it must have been a dream come true. They won over the crowd with dose of exuberant funk, but with three female leads out front, added a bit of a classic girl group vibe.

What was most striking about them was how, despite there being around 10 of them, each member of the band seemed to have a distinct personality. Not one member of the band was stuck in the background. Even if this was just a look or image that caught your eye, you didn’t overlook anyone. That can be very powerful with so many members, especially during the end of the set when they were all cutting loose.

They said they have an album coming soon – definitely worth checking out.