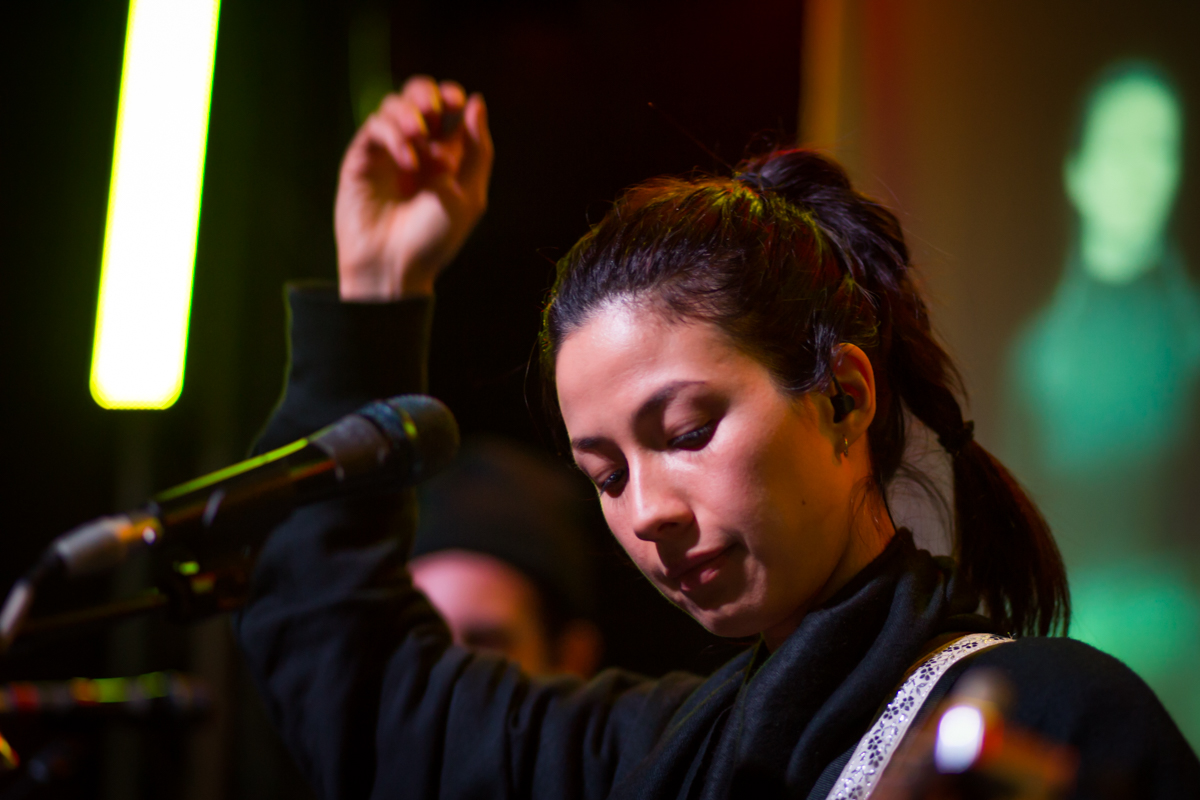 An eventful evening unfolds within the Arts Club as Getintothis’ Ryan Craig heads over to see just how great Emmy can be.

If you’re unfamiliar with Emmy the Great, then we’re more than happy to be your introduction. With over a decades worth of music, the Hong Kong-born, now London-based musician offers more than just your run of the mill heartbroken singer.

Moving forward from her first two albums, First Love and Virtue, the focus has shifted to the struggle many fear of a life without meaning. However, it’s not all doom and gloom as the prospect of love can save us all! Perhaps a tad clichéd in her views, but take nothing away from Emmy‘s ability to engage with the audience through powerful vocals and the occasional chat.

Here to first warm up the crowd of 20 was lone artist O Karmina, whose mix of hums and repeating beats garnered little reaction from the few that could actually see her playing the keyboard, hidden in the corner behind the speakers.

It was around half way through the set when O Karmina really seemed to announce herself, presenting the vocals as the centrepiece and any other sounds created were only there to support her voice. Following up with a question of ‘who here knows Bat for Lashes?‘ was met with only silence as a reply, but the undeterred singer continued with the greatest of admirability.

CYTA were next up to try their luck. The trio opted for hardly any lighting for the start, only the dreary guitars gave any indication that someone was there on stage. Soon enough the band found their feet and songs such as Voices Carry on Through the Mist created a few bobbing heads. Some of guitar solos gave a faint hint of a pre-1973 Pink Floyd (think A Pillow Of Winds) – which is of course only a good thing.

For the bands final song, both O Karmina and Emmy the Great were invited to the stage. This was by far the highlight. The artists collaborated extremely well. Perhaps they would be better as one band: O CYTA the Great?

The time was now here for Emmy the Great. Jumping immediately into her whimsical lyrics, the musician made a great effort to communicate with her audience. It was clear most were here just for Emmy.

Once again, all three acts were now on stage complimenting each others sound with the help of their own sound. It almost seems unfair to call this Emmy the Great‘s gig. When put on the stage together, each ‘support’ act made a great contribution.

Songs such as Algorithm had the lyrics now flowing so naturally, with a relatable, personal feel. It was clear Emmy was passionate about the very words she was singing. Soul filled and deeply enchanting.

The personal feel only got deeper when Emmy the Great told the story of her love for Leonard Cohen, and how his words and his passing are both gifts.

The heartfelt chat led to a Cohen sing-a-long with the audience. Lyric sheets to the song Anthem were passed around and rehearsed as each person was encouraged to at least sing the chorus. As nice as an idea it was, most chose to simply not sing, perhaps summing up the overall tone of the night.