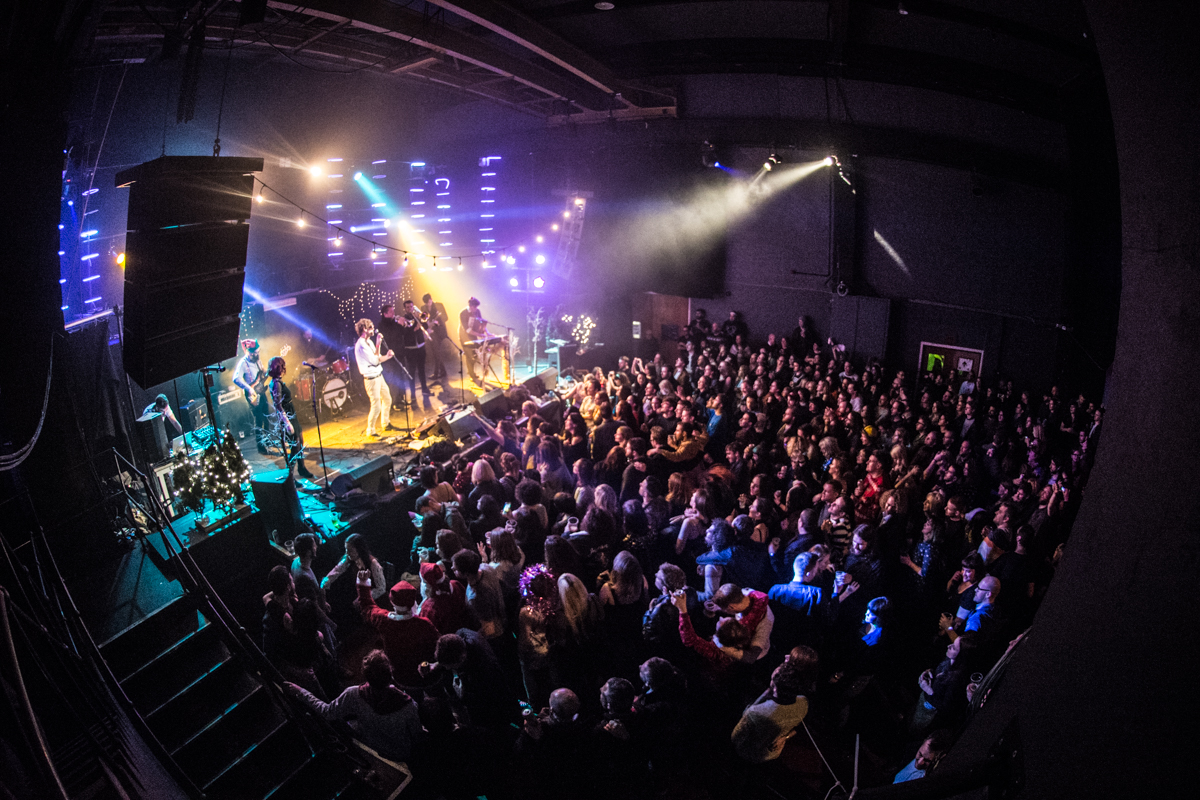 For the first time since the closure of the Kaz, Getintothis’ Shaun Ponsonby basks in the festive glory of 10 Bands In 10 Minutes’ Christmas special.

The Invisible Wind Factory is a bitch to get to.

Getting off at Moorfields and walking down the dock road is probably quite pleasurable on a hot summers evening. Less so when it’s the middle of December and halfway down the heavens open and it starts teeming. It messes your hair up for one thing. This writer ended up fashioning his glittery scarf into a sort of makeshift, camp turban, and then realised that once you do that you gotta keep it on all night because you’ll have hat/turban hair. It is quite the quandary.

Naturally, the grumpiness disappears when you step inside. Speaking for myself and not Getintothis, I can’t quite decide whether or not I like the venue – it is cool, but it seems to know exactly how cool it is. It isn’t exactly subtle. They decked it out nicely for the theme of the night though. There was a definite winter solace theme on stage.

This is the first time 10 Bands In 10 Minutes has taken place since the closing of the Kaz, and we weren’t sure what to think at first. The space is quite vast compared to the old venue, and we were fearful that the Invisible Wind Factory might have been too big a venue for it, but the set-up worked. There was space to dance, but it still felt full.

It all finally kicked off at around 8.30 with The Formby Band giving us a blast of brass. It started the night off on a more traditional plane before Stadt Skulls took to the stage and blessed the crowd with a run through Mud’s Lonely This Christmas and Echo Beach’s version of Chris Rea’s Driving Home For Christmas (complete with Michael Jackson socks), along with their own originals. 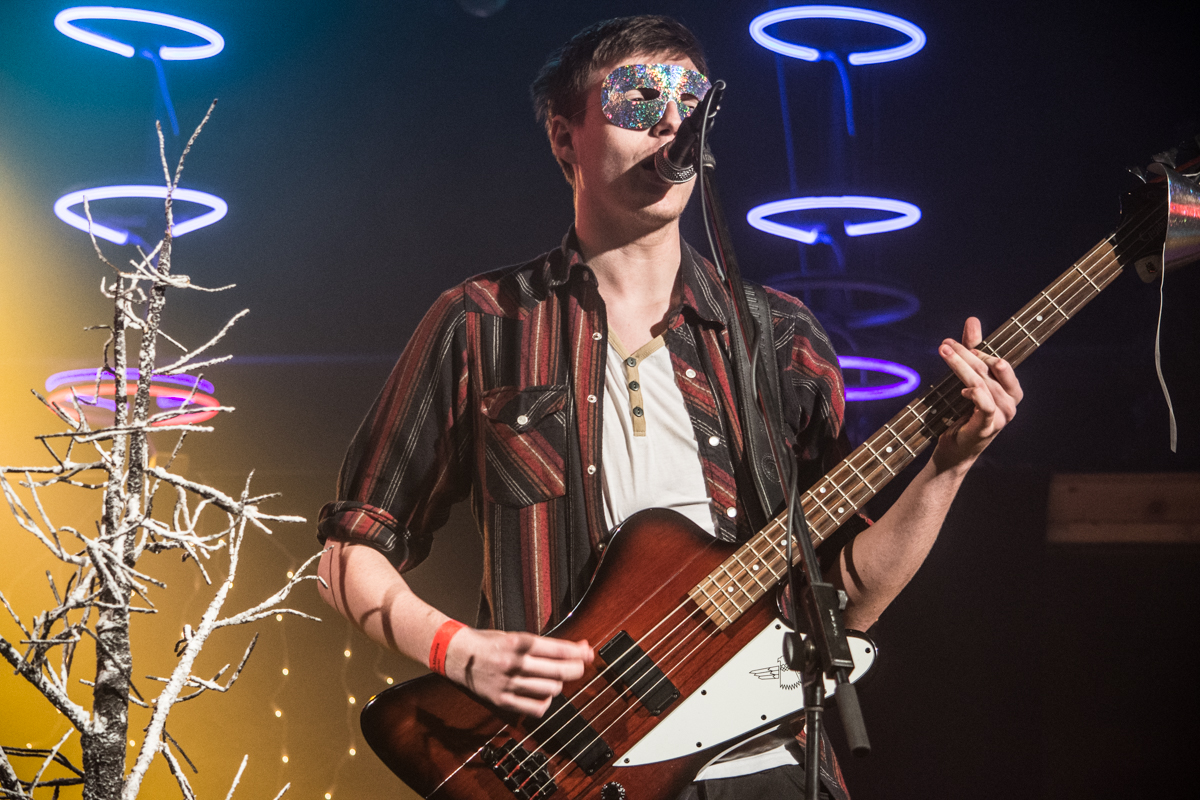 It seemed that some people didn’t quite get into the spirit of things. Feral Love’s moody two-fer ended with their Christmas song of choice, which for some reason was 2 Become 1, the Spice Girls’ safe sex anthem that just happened to be released at Christmas. By that logic, someone could have picked Bohemian Rhapsody – after all, it was Christmas number one twice. It went down well, but we’re pendants. So, there.

Ste Hudson & the Fiat Pandas chose a sort of noise rock rendition of Greg Lake’s I Believe In Father Christmas. Given Lake’s death a few days earlier, we wondered if this was a last minute addition to their set, and it certainly appeared so at some points in the song.

All in all, the night at this point was fun, but missing a certain spark. Then on burst Queen Zee and the Sasstones, single-handedly turning the night around from a fun but largely innocuous event to something with fire and urgency. Motioning the crowd to move forward, they opened with an almost death metal version of Last Christmas (“Who likes George Michael?” *cheers* “Who likes Wham!?” *cheers* “Liars!”), before paying tribute to Pete Burns with a gloriously chaotic version of You Spin Me Round (Like a Record) which ended with a seemingly unplanned guitar smashing.

It was really striking the level of charisma that Zee brought to the stage in contrast with a lot of the other bands. Furthermore, there’s no feeling of being too cool for school from them. It’s refreshing, and they stuck out for all the right reasons. We were this close to throwing our underwear at the stage.

Real Terms had the tough task of following, but luckily the crowd were significantly more amped by now. They played two of their own songs and went to leave, until they realised they hadn’t played their Christmas song and quickly rectified with a brisk stroll through Jona Lewie’s Stop The Cavalry, where half the crowd did oom-pah squats.

Down & Outs seemed to try to bring a bit of chaos back to proceedings, but it felt a little more controlled than it had been for Queen Zee. Still, they opened with the droll question “Who likes Christmas songs by convicted paedophiles?” before playing Gary Glitter’s Another Rock & Roll Christmas and force fed us Do They Know It’s Christmas?, which we don’t want to admit we enjoyed, but can’t quite help ourselves. Terrible song or not, the knowing delivery from the band won us over. Especially when you have a Christmas tree singing on stage with you. What’s not to love about that picture? 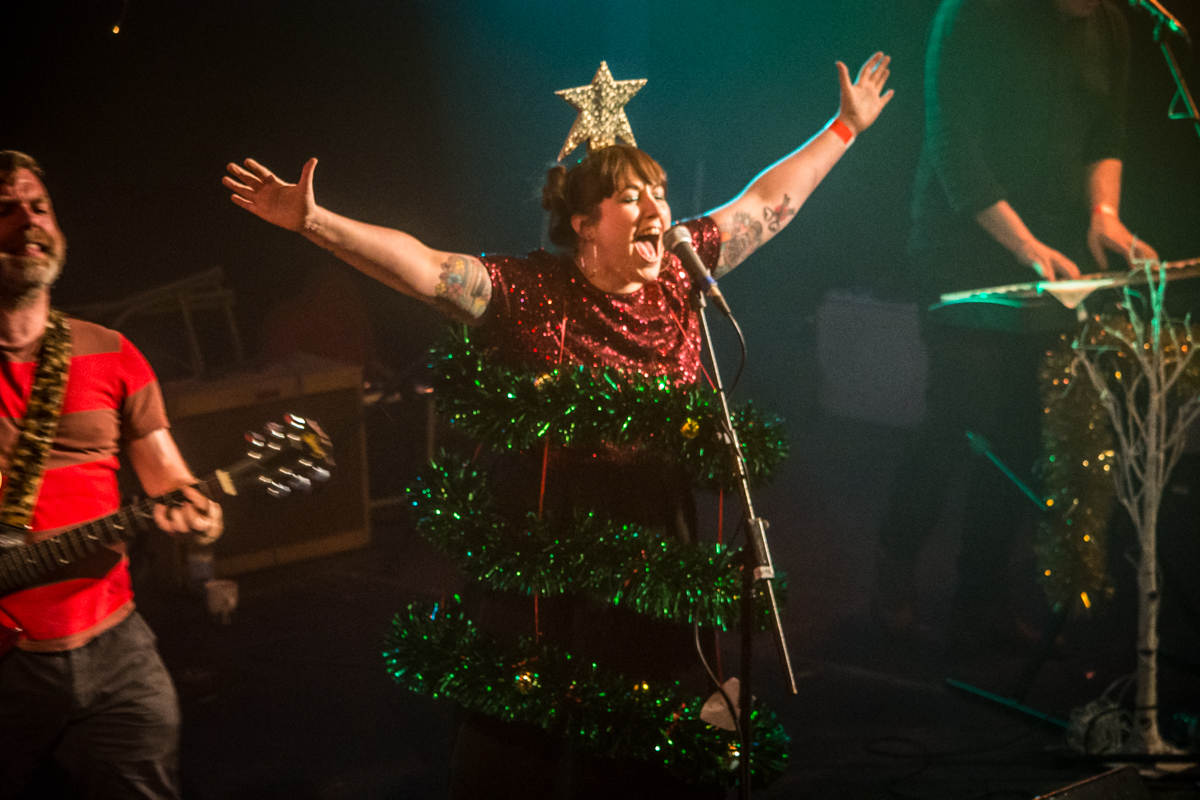 The ante was upped further by the mysterious Spanish Announce Team, sporting face masks and balaclavas. The highlight of their set being an inspired mash-up of Little Donkey and Rage Against The Machine’s Killing In The Name Of that got the crowd moshing, before Married To The Sea gave us a dose of Elton John’s Step Into Christmas, and finished off the night with a mass singalong of Fairytale of New York, which even the most ardent Scrooge has to concede in loving.

Events like this can be hard to pull off. With each band only getting short, 10 minute sets, it’s difficult for anyone to truly shine, and then there is the novelty element, which different bands engage with to different degrees.

Ultimately it’s the acts who don’t hold back who come out looking best. Seize the moment, put on the silliest 10 minutes you can muster and leave a lasting impression in the minds of the audience.

Of course, it is easy to tell people to be silly when you spent the entire evening with a glittery scarf on your head as a makeshift turban.