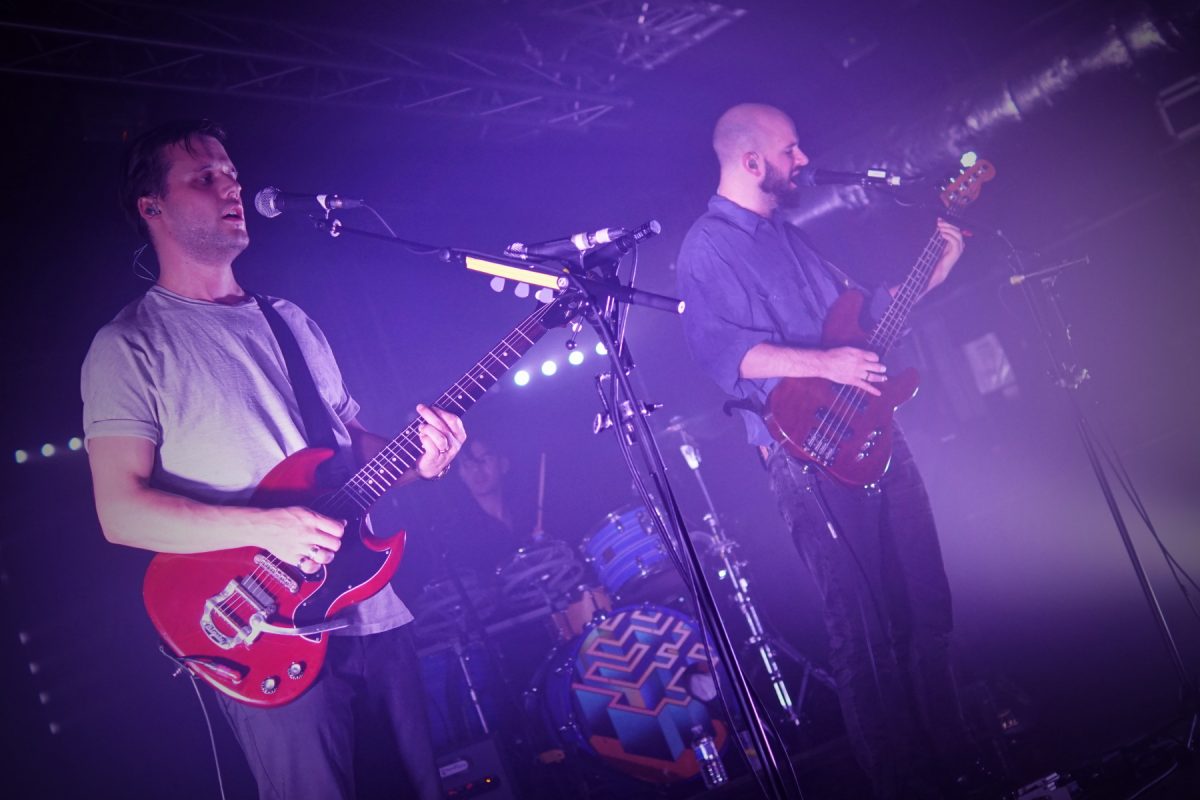 With White Lies making a long awaited Liverpool return, Getintothis’ Paige Aspinall sees for herself what all the fuss is about.

Following on from their previous album of Big TV, White Lies are taking to the road once again and bringing us their newest album, Friends. Tonight’s sell-out show at Liverpool’s O2 Academy finds the band a long way from their west London base, but they still feel at home with the ever-loving Liverpool crowd.

First to the stage are up-and-coming band, The Ramona Flowers, a five-piece ’80s-influenced group from Bristol. Without saying a word they kick right into their first song, Start To Rust and get the crowd swaying in response. It is clear from this that at least 80% of the crowd actually know who these guys are and this remains evident throughout their entire performance.

It is ten minutes into their set before The Ramona Flowers say their first words to the crowd. “How you doing Liverpool?” is met with immediate screams, showing just how the night is going to pan out for the Bristol-based band. The five-piece are known for writing songs about human warmth and the ‘things that make life tick‘ so with that, they play Skies Turn Gold from their latest album, Part Time Spies.

The Flowers‘ growing reputation is all the more impressive as some of the band members even hold down their own day jobs. Crazy, eh? Before leaving the stage, the band made a conscious effort to thank the crowd for being there, telling them to have a great night before then deciding to take a huge selfie with them all. This band is definitely one to keep an eye on.

Now it was time for the moment the crowd had all been waiting for, White Lies arrived on the stage and instantly hit the ground running, jumping straight into their first song of Take It Out On Me, which got the crowd moving, to say the least. Following three consecutive top five albums, the band are exploring a new sound on their latest release whilst still modernising their trademark synth-rock sound.

Frontman Harry McVeigh’s vocal delivery makes us think back to the icons of the post-punk genre recalling the likes of Joy Division or Echo and the Bunnymen. Utter perfectionists. The sonic influences coming through more on A Place To Hide made the gig that little bit more special for the long-awaited crowd.

Atmosphere? Disorder? Transmission? – see what made the cut in our Joy Division Top Ten

Making us suddenly feel like we had taken a trip back to 1980 was Hold Back Your Love which, of course, further invigorated the crowd. The song seemed like it had been cherry-picked from the 80s and thrown right in front of us, yet this was more of an aesthetic shift than a structural one. As a song it doesn’t deviate itself wildly from the tried-and-tested White Lies‘ formula.

With a heads-down and focused delivery, the trio give the crowd exactly what they want. Possessed of an almost indefinable rock ’n’ roll-like quality, this is a band that reeks of authenticity. Their fundamental appearance appealing to the sea of fresh-faced moshing masses that spread themselves out as the gig gets busier and busier. Despite being released less than two months ago, Don’t Want to Feel It All had an immediate response with the crowd, the fans enticing a mass singalong of the anthem with the whole crowd bopping up and down with abandon.