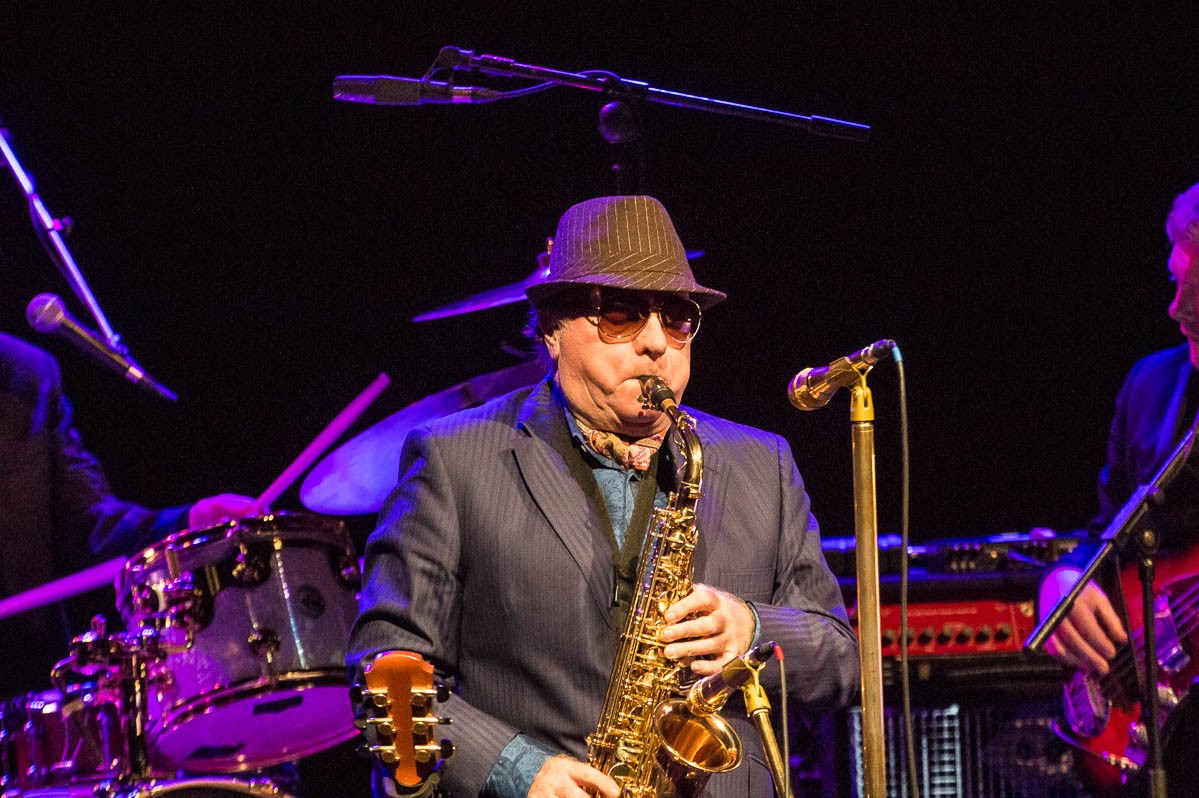 With Van the Man opening a run of performances in the Philharmonic Hall, Getintothis’ Shaun Ponsonby ensured he was there to see a master at work.

The last time this writer saw Van Morrison was at the Empire Theatre. He started the set pretty ambivalent, but after about three songs he began to soar. Until the end, when his keyboard player wasn’t playing Gloria to his satisfaction and he started bellowing “Long notes” at him.

He seemed in much better spirits tonight, as he takes to the stage at exactly 8 o’ clock. He strolls on clutching his saxophone – which he plays regularly during the night – whilst most of the audience are still taking their seats. He opens with Too Late from new album Keep Me Singing (his 36th!). Straight away, it is evident that he is going to be in fine voice. Although Van may not be the greatest technical singer, he has a totally distinctive voice. He hasn’t lost is unique Van Morrison-ness over time.

It is always fascinating how Morrison always seems to play around with the material on stage, especially on his most well-known material. When he pulls out Moondance, Jackie Wilson Said and Brown Eyed Girl, he pretty much disregards the original vocal melodies altogether. It sometimes feels like he is punishing the audience for responding to the hits. Luckily that doesn’t distract from the sheer brilliance and musicality of the songs. If there is one thing that seeing Van Morrison brings home is what a brilliantly consistent songwriter he has been throughout his career.

What it does occasionally do, however, is give the song a totally different feel. Most notably, Have I Told You Lately? was transformed from a ballad to an up-tempo. This either distracted the song from its subtleties or successfully recast it, depending on your view.

The week’s not over yet! Check out what is left in this week’s Gig Guide.

Some were undeniable improvements. The mawkish 80s Cliff Richard duet Whenever God Shines His Light was made somehow bearable, thanks in no small part to the band, who really were incredible throughout. Van has a reputation for being notoriously volatile on stage (though it didn’t show itself tonight), which no doubt keeps the band on their toes night to night.

Special props to backing vocalist Dana Masters, who followed Morrison’s lead vocal almost to the letter throughout many songs and was given several solo spots of her own. She had a soaringly soulful voice that helped bring many of the songs to life.

After being subdued and respectful for the whole night, the crowd jumped to their feet for the short encore of Gloria, and an extended jam after Van left the stage. It has to be one of the greatest garage rock tracks of all time. Sometimes the obvious ones are obvious for a reason.

Van’s days of innovation are behind him, but he continues to write brilliant songs, and he has a catalogue of work that needs to be performed. That he has found a breezy, jazzy style that suits both where he is at and does a great service to this catalogue is to his eternal credit.

On our way out, a friend who accompanied us uttered “That was an education”. A master at work.