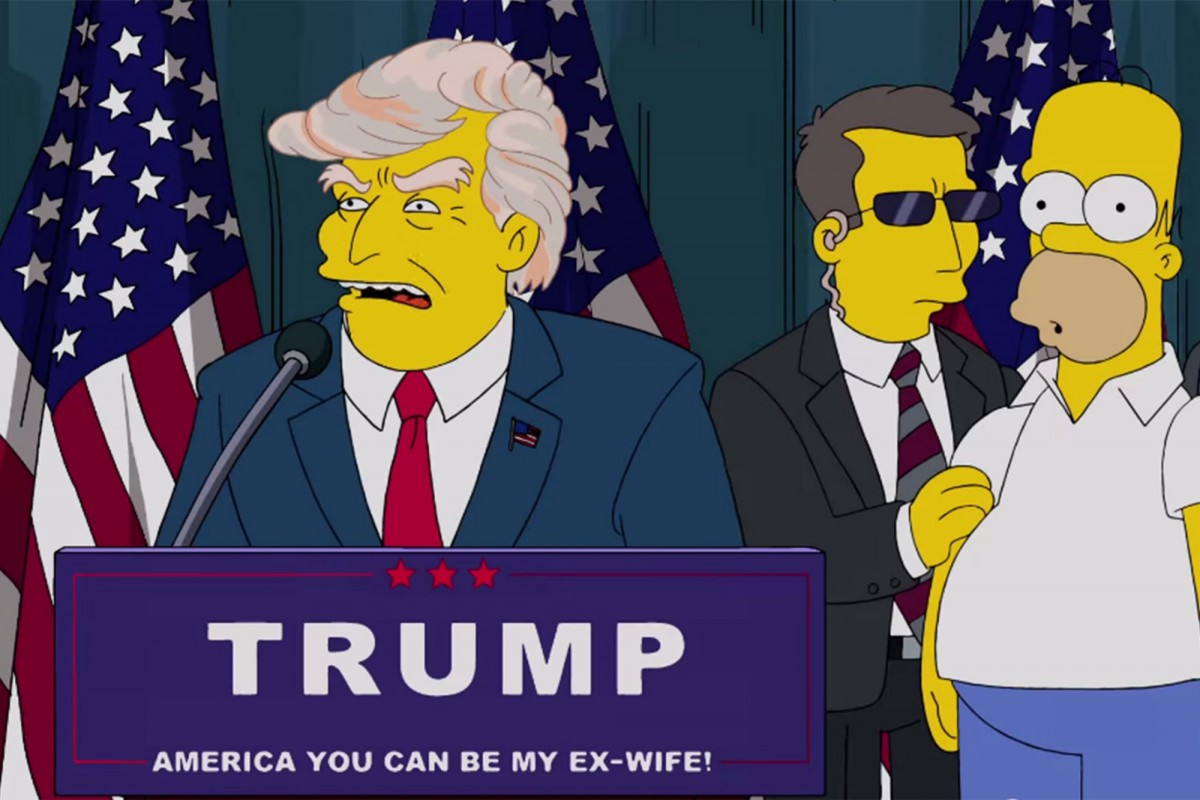 The Simpsons – NOT predicting Trump

Following the shock result in the US election, as ever Getintothis’ Shaun Ponsonby is focussed on the bigger issues.

The big news this week? Motley Crue’s Nikki Sixx doesn’t wash his hands after he goes to the bathroom.

But I don’t want to talk about the election. It has been done to death by now. Everyone and their best friend’s former dog’s kennel has commented on what this means, why it happened, what the future could hold. We have all had our fill. I’m tired. I just want to sleep it off.

I could probably rant all day about how Hillary would almost be just as bad, but in a less obvious way. I could terrify everybody by pointing out that Trump’s election has bigger implications involving the rise of the new Alt Right. Not just in America, but powerful figures in France (Marine Le Pen), Holland (Geert Wilders), Greece (Golden Dawn) and right here (What? Do you think it is a coincidence that there was a 160-odd% rise in homophobic hate crime following Brexit, even though homosexuality never entered the debate?), taking advantage of pretty much the same set of circumstances as you-know-who (in Germany, not Hogwarts).

I could put your mind at rest and suggest the historically less likely outcome that this shake up could be good in the long term. That the political elite could theoretically be on their way out and a more honest, democratic society is created. One where Bernie Sanders is rightfully added to the ballot. And by shite, I hope that is what happens.

A cataclysm of bullshit. Read past editions of Cosmic Slop if you can be arsed.

I could make light reference to the fact that all the conspiracy theorists who bark on about the illuminati controlling everything need to eat a king sized humble pie, as it seems Beyonce and Jay-Z – very much thought to be the King and Queen of the Illuminati by stupid people – backed the wrong horse.

But, nope. I don’t want to. I’m fed up. You’re fed up. And what the fuck could I add to the discourse anyway? I’m a moron. I’m writing this wearing only my underwear, which has a weird stain on it and I’m not entirely sure where it came from.

Well, actually, maybe there is one thing. An issue that, for the obvious reasons, made my blood boil almost as much as both candidates. I am, of course, referring to misappropriation of The Simpsons.

I am sure there are weird misappropriations that get on your nerves as much as this gets on mine. The only one that I find more annoying is when people describe a TV show as having “canned laughter” when it was filmed in front of a live audience (canned laughter comes from THE CAN, you idiots). You have probably seen this doing the rounds on social media. According to the tin foil hat brigade, it proves that The Simpsons knew that Trump was going to be elected President.

I am basically Getintothis’ designated The Simpsons correspondent. I am to this family what Nicholas Witchell is to the Royal family. Except mine are supposed to be funny.  So, I thought I would dissect this, study exactly how right they were, even down to the woman dropping the sign in the background. It is eerie, right? And they broadcast that 16 years ago? Apparently The Simpsons are a regular Paul the Octopus. It would be fascinating, if not for one small detail.

I mean, really. How could The Simpsons get it right 16 years ago when the polls got it so wrong 16 days ago?

The clip is from 2015, a viral sketch that was created to promote the 2015-16 season. It was produced after Trump announced his candidacy. The reason it looks like the clip of Trump is because it is directly parodying that clip. The amount of people who have shared this clip willy-nilly without even checking it is absurd. A friend of mine said he saw it on BBC News yesterday afternoon. I get it, there are a lot of Simpsons episodes to trawl through – and most of the ones made after 2000 are terrible. But, at least do a quick Google.

The worst part is, people keep even naming the episode they claim it is from, the season 11 episode Bart To The Future, so they could have easily found out for themselves. It is one of those future episodes they do far too often, where they jump the shark by having Lisa be President. There is a brief, throwaway line that does exist in that episode (which, unlike the Trump clip, was not produced in HD), where Lisa utters the line; “As you know, we inherited quite a budget crunch from President Trump”. And that’s it; one throwaway line that was based on the fact that Trump had recently threatened to run for President. It was the equivalent of them having President Schwartzenegger in The Simpsons Movie.

With No Homers Club staging their second Simpsons exhibition, Getintothis’ Shaun Ponsonby geared up for the ghoulish treats on store at the terrifying Treehouse of Horror.

As much as it may sound like a small thing, it is indicative of a bigger problem. People will believe any old shit if it looks vaguely possible. The mind-set of the conspiracy theorist; you can throw as much evidence as humanly possible at them, and they will twist every last word into being part of the conspiracy. It is growing at an alarming rate in the online communities and it is now spilling over into real life. Yes, conspiracies exist, but find proof (and, for that matter, look up the word “proof”, because it doesn’t mean the same thing as “adds to my suspicion”) before you start bellowing like a dog with diarrhea on a global platform and devalue your entire argument.

Anyhow, at least an abundance of Simpsons references can keep us entertained in relation to the last few months. There was the Treehouse of Horror were Kang and Kodos ran for President (“Don’t blame me, I voted for Kodos”), there is the episode where Sideshow Bob ran against Mayor Quimby and rigged the election, there was the one where Homer ran for sanitation officer (“By all means, vote for this sleazy lunatic”), and always twirling…twirling…twirling towards victory.

As for whether The Simpsons writing staff know something we don’t, we will find out if the animated Lisa Simpson succeeds Trump.