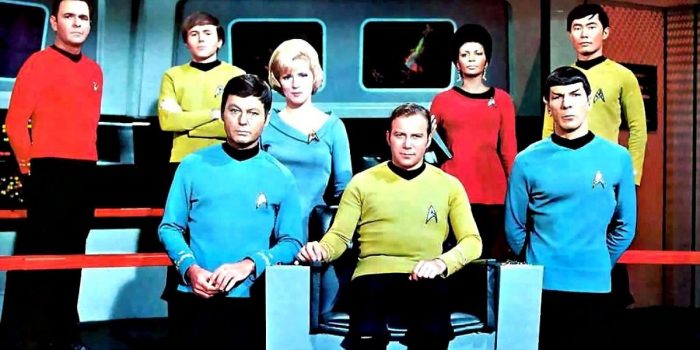 All aboard! The crew have their listening ears on.

Trekkies, your time has come as Getintothis’ Nathan Pang makes his debut with his Top 10 Star Trek musical moments.

It’s 1966. The first Lunar Orbiters orbit, the Lunar Landers land, and the space race is starting to see the finish line. Closer to home, the boisterously technicolour Star Trek premiered, with the first of its many otherworldly themes. And by God it’s a beauty.

Composer Alexander Courage, accompanied by William Shatner’s unmistakable monologue, opens the floodgates of the geek-favourite franchise with a theme for the ages. As creator Gene Roddenberry conceived, the theme boldly exudes both the ethereal soundscapes of the unknown, through Loulie Jean Norman’s electronically enhanced soprano, and the familiar adventure of the Western, in the operatic use of the flute and organ.

The best science fiction themes have a curious job, of trying not to sound like anything you’ve ever heard before, which is why some of the most iconic are often the most experimental. The original Doctor Who theme was painstakingly constructed by Delia Derbyshire and the BBC Radiophonic Workshop mixing a multitude of recording techniques such as filtered white noise and the aptly named “wobbulator”. The Twilight Zone’s was pieced together with two existing cues from the avant-gurde composer Marius Constant that combined to incite terror. And Star Trek? Well they used Loulie Jean Norman.

Soundtrack music is different. It’s not always there to represent, just to enhance, but any die-hard fan may well recognise some of these as much as the theme itself, especially those that can play and replay Star Trek in their heads. So let’s skip the theme and look at some scores.

Star Trek Beyond was film no. 13, and the upcoming Star Trek: Discovery will mark the 7th TV show. That’s a lot of music, and a lot of soundtracks, from a veritable Who’s Who of musical legends. So, I’ll be focusing on the films; here are the 10 tracks in the .1% that most deserves your attention. Not necessarily a countdown of the best, more a path of essentials through the series. Engage.

As a fan, I would advise caution to anyone thinking of watching Star Trek: The Motion Picture. A film crawling at impulse power, it feels as though somebody pauses it for 20 minutes in the middle of each act. But what does work is Jerry Goldsmith’s glorious score. On second viewing, I’m quite convinced that the film was just a kaleidoscopic music video for Goldsmith’s work. Passing through the endlessly astonishing entity that is V’ger, the score includes lustrous strings, a fanciful harp, and the unforgettable Blaster Beam. My pick, like a second theme, introduces the all-important 8th lead in the film with The Enterprise. Kirk has returned home and it feels like a moment that took 10 years to build up to.

Also listen: Main Title. I’m leaving both the Original Series and Next Gen themes out of the main list, they’re a given.

Primal and energetic, from the word go this score eschews the last films dour (but majestic) footprint, and brings the crew back to reality. Forget the final frontier, this is a back to basics fight for survival against arguably Captain Kirk’s one true rival. James Horner mightily followed Goldsmith’s Oscar nominated score with a distinctive entry that balances the sea-faring adventure of my pick Battle in the Mutara Nebula with the palpable horror of the likes of The Eels of Ceti Alpha V. There are so many highlights in this soundtrack, but Battle claims the ‘first single’ badge. A combination of familiar themes, it becomes more than the sum of its parts as the final hands are dealt between Kirk and Khan.

Also listen: Amazing Grace. Because of course Scotty can play this on bagpipes, and just when we need to hear it the most. *Cue ugly tears*

For those who don’t know, Voyage Home is the one where they time travel to the 80s to save humpback whales, because of course they do. It’s by far the shortest soundtrack, with I’m assuming the rationale being if music is going to be used in the 80s, they will not hold back, it’s all or nothing. Infused with jazz and high energy, it’s all reserved for the wacky antics of the fish out of water comedy action scenes. As soon as Market Street kicks in, there isn’t a second that isn’t a hopping fun 80s adventure, with my personal highlight being the rapid-fire ‘circus music’ style Hospital Run. Star Trek has never been more fun.

Also listen: Logo/Main Title. Probably sacrilege as a Trek fan, but I’m not much of a defender of Goldsmith’s theme for The Motion Picture and The Next Generation. Too much (albeit the much loved) fanfare, too little sci-fi. And Rosenman’s score for Voyage Home in all is a step below the high bar set by his predecessors, but I give the man high props for writing easily my favourite version of Goldsmith’s theme.

Ah, the Final Frontier. A story of a crazed emotional Vulcan trying to find God, and instead finds a giant floating head. It’s not any better on screen. At least Goldsmith returned for this to bring another cracking score to an undeserving film, but we can’t have everything, apparently. The main title is followed by The Mountain, a beautiful piece that also introduces the theme for the grand trio of Kirk, Spock and McCoy. That precise chemical mix of romance and hope and wonder just breathes Star Trek perfectly.

The first thing you notice in the overture to Eidelman’s impressive entry, is the minor key, with a brooding sense of peril from the word go. A political conspiracy thriller, Undiscovered Country is markedly one of the darker films, with an even darker score. Filled with militaristic percussion and booming bass tones, the score carries like an engine in the story. Leaving few moments of serenity, one such is Sign Off, picked just for sentimentality, really. Second star to the right, and straight on ‘till morning. It’s the last perfectly placed jigsaw that makes this the finale that the magnificent seven always deserved since their first damp squib of an ending in the TV series.

Adding an addendum to a pretty perfect finale for Kirk is a dangerous game, and one that is not controversial to say they lost. The soundtrack itself is also not bold in breaking any new ground. With veteran composer to the Next Gen series, Dennis McCarthy provided a score that gave perfectly adequate accompaniment to the film, but little beyond that. Action music for me only stands out when the scene already successfully builds up the tension and excitement, but emotional beats are brought out so vitally by music. Somehow, Kirk Saves the Day manages to be both. Watching Kirk be a hero once more with a piece that’s sombre and vigorous at the same time is a joy.

Back to an even numbered film, First Contact brings Star Trek back on form (though probably the only time in the Next Gen era). The film also brought back the legendary Jerry Goldsmith. Pushed for time and with the help of his son, he manages to create one of the most iconic soundtracks for the series. First Contact brings the film to an emotional high point. Goldsmith takes a tender approach, ending with a bow, rather than a bang.

I’ll admit it. Giacchino’s Star Trek theme is my favourite. Despite the fact that I do think Courage’s TOS theme is the best and most Star Trek, but goddamnit does Enterprising Young Men move me no end? This was the first Star Trek I ever saw, and I’d assumed that this theme was actually just a new rendition of the original, which shows how well it worked to capture the spirit while creating something new. Or maybe I was just clueless.

I always appreciate when a score takes a breather from the grand orchestral symphonies, here featuring an elegant piano piece, especially when underscoring Mickey the Idiot’s tears. This surprisingly rare departure makes the scene all the more emotional, and the crescendo of strings brings it home to reveal: Cumberbatch. Is. HARRISON. Oh wait, he’s not, never mind. Also, who the hell is Harrison?

Also listen: Buying the Space Farm. When Spock yells “Khan”. The scene itself might shit all over Wrath of Khan, but the music does its damnedest to save it.

The Beastie Boys. Who could have predicted they would end up leaving such a mark on the recent trilogy? Kirk rebelled in the red Corvette to Sabotage in Star Trek ’09 and was Body Movin’ with a couple of feline alien Caitians in Into Darkness. This time round, the “classical” piece gave opinionated fans whiplash, from the controversial first trailer, to creating one of the climactic crescendos of the film with arms-in-the-air hysteria. It may not be on the soundtrack, but if there’s one piece of music that’s stayed in our heads after Beyond, it’s this.

Also listen to, from Giacchino: Night of the Yorktown

Never one for following the rules (that’s a lie, I’m a total sheep), I’ve already actually listed 18, so I might as well throw in another.

Or more commonly referred to: The Star Trek Fight Music.

I was going to keep it to the movies but I’m weak, okay? Easily the most iconic piece of music from the Original Series outside the theme, and an unashamedly reused one during the shows brief run. Primal and formal at the same time, the harsh bass guitar, unnerving brass and unrelenting percussion builds a true television soundtrack classic. The episode isn’t half bad either. For those that have seen it, “JIM!” is undoubtedly one of the very best moments in the whole franchise.

By the way, William Shatner and Leonard Nimoy both had musical careers. Well one of them did, the other created the inexplicable artistic opus of the spoken word. Check. Them. Out.