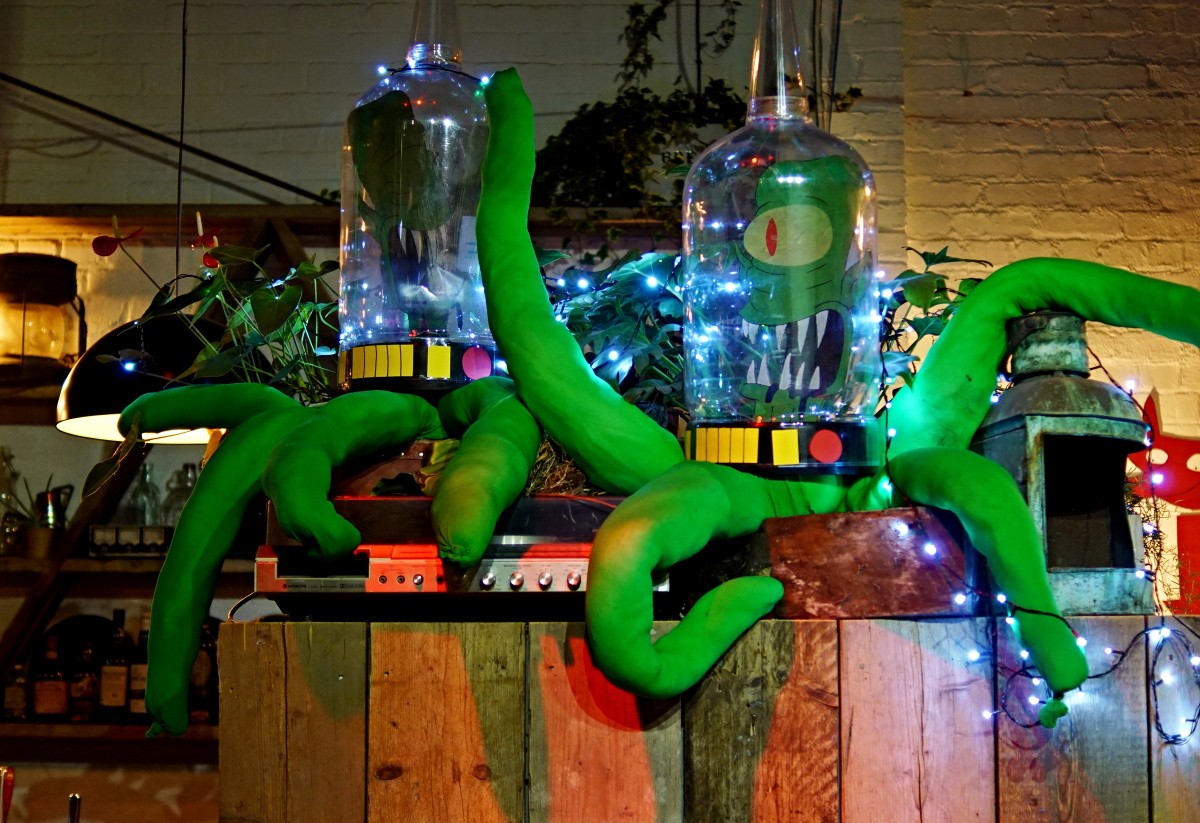 With No Homers Club staging their second Simpsons exhibition, Getintothis’ Shaun Ponsonby geared up for the ghoulish treats on store at the terrifying Treehouse of Horror.

There are few popular culture phenomena that inspire the level of devotion that The Simpsons enjoys. It is quite frankly the defining TV show of it’s generation (at least in the 90s, not so much now). This is pretty clear with No Homer’s Club, who staged their second Simpsons-themed exhibition on Friday night.

Last year, there wasn’t a particular theme for the event outside of all things Simpsons, but this time they went for Treehouse of Horror (the name given to the annual Halloween-themed episodes). It proved to be an inspired choice, both from the perspective of the art on display and the overall décor of the room.

As we entered Constellations, to the smell of a Chilli cook-off in the distance (“In your face, Space Coyote!“), we were encouraged to pick up a badge to cast our vote for the upcoming election; aliens Kang or Kodos (“Don’t blame me, I voted for Kodos”) in what must be a commentary on the most terrifying example of life imitating art in recent years.

The actual art was a mixture of real life models of objects featured in the programme (Homer as a jack in the box, Marge as a witch etc) and artists who had followed their own muse from the words “Simpsons” and “Halloween”. Amongst these were a poster for Stephen King’s IT which depicted Krusty the Clown as the clown, and the kids from the show as his victims and a futuristic Nelson Muntz terrorising the characters from Futurama (see what they did there?)

Although the hip hop being blasted over the PA didn’t feel quite in keeping with the event, the bands who played were fittingly off the wall for a Simpsons celebration. Organ Freeman played their set pretty early in the night, decked out as Homer, Nelson, Bart and Millhouse. They split their set alternating between their own material and an array of classic Simpsons songs (Baby On Board, Can I Borrow A Feeling?, the Stonecutters Theme, Do The Bartman, a medley of songs from the Planet of the Apes musical).

Is The Simpsons the Shakespeare of our times? Getintothis’ Shaun Ponsonby seems to think so.

They also bookended the set with songs that had notable appearances in the show, Iron Butterfly’s  In-A-Gadda-Da-Vida as per Bart Sells His Soul (“Wait a minute! This sounds like rock and/or roll!”), and AC/DC’s Highway To Hell from Simpsons Bible Stories, although they didn’t sing any of the verses, instead hilariously screeching gibberish that still managed to outdo Axl Rose.

The reaction to Ohmns is always fascinating. It seems that whenever we see them play a third of the room loves them, a third are totally bemused and a third walk out in disgust. The latter two points are the reason this writer finds himself in the “love them” camp. They are a glorious shambles, and manage to provoke a reaction of some kind no matter what. In all sincerity, even the “walk out in disgust” people must give them credit for that. They remind us a little of The Replacements in that sense, even down to the bizarre stage banter (mumbling something incoherent about Sean Penn). We will always take people playing with passion over polished sheen.

There was also a donut eating contest from Hell’s Ironic Punishment Labs (a reference to the season five Halloween segment The Devil and Homer Simpson), and a performance of Edgar Allen Poe’s The Raven by the Quad Collective. This was far from a safe option, given that we were essentially a bunch of drunkards in a bar, but despite the expected the chatter throughout the performance it was a fun interlude and a welcome change of pace for a while. Plus they didn’t forget to reference The Simpsons’ rendition of the piece in the first ever Halloween special. It also showed the ambition to include art of all kinds within the exhibition.

Although the feeling in the air wasn’t quite at the level of excitement as the first event  – which is to be expected, and we wouldn’t have noticed if we weren’t at the last one – it was still a great success, and worthy of the greatest TV show ever made. We had to jump the last train, so we left during The Simpsons karaoke (there was a mass singalong of Happy Birthday Lisa as we walked out the door). It gave us time to ponder on the journey home.

If they continue with these celebrations, and we hope they do, it will be interesting to see where they take it next. The Treehouse of Horror theme was a natural next step from the first general celebration and gave the artists a lot of room to interpret as they please. But they might have to start getting a bit more creative with the theme if they wish to continue down that road. Speaking primarily for Getintothis, we would love a Moe-themed night!

The crowds standing on their hind legs, like a gang of Rory Calhouns

“We sell forbidden objects from places men dare to tread. We also sell frozen yogurt which I call frogurt.”

We think all commentary on this is moot

An actual Treehouse of Horror

“You didn’t tell me this house was built on an Indian burial ground!”

Happiness is just a Flaming Moe away