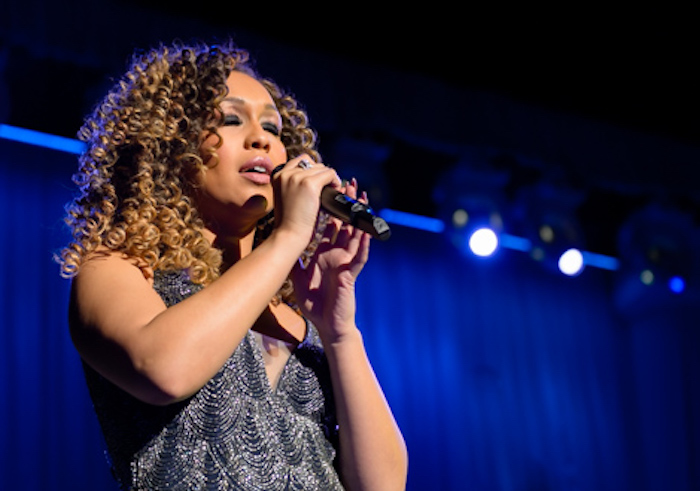 Famously, those who miss out on winning popular singing competition the X Factor usually do much better for themselves than those who succeed. You only have to look at the roaring success of finalists One Direction and compare it to that of the actual winner Matt Cardle – who nobody has heard much of a peep from since his Christmas number one. In the same year, the city of Liverpool were devastated when soulful songstress Rebecca Ferguson was voted out of the competition, and after several successful releases on labels such as Simon Cowell’s Syco, Epic Records and American label Columbia Records, the X Factor fate of this semi finalist definitely worked in her favour. Six years since her appearance on X Factor, scouse bird Rebecca returns to her home turf to play a sold out show in the Liverpool Philharmonic.

Acoustic singer songwriter Chelsea Alice Scott begins the evening with her heartfelt, folk-style songs which cover a range of topics and emotions. With understated, structured and somewhat predictable chord sequences on guitar the Sheffield singer’s powerful vocals are what grabs the attention of the eager seated audience as her lyrics impressively fill the space of Liverpool’s Philharmonic. More complex melodies come from the accompaniment of an unnamed keys player, whose piano style tones give her sound more texture and character.

Although an amiable individual, telling stories of inspiration for her meaningful lyrics and covering the Lumineers’ Ho Hey as a means to win over her spectators, her intimate approach was a bit lost on the formal and vast audience. Chelsea is undoubtedly talented – with an admirable vocal range, an infectious charm and blatant skill in songwriting – despite that, her stripped down and modest music was perhaps not best suited to venue of this size. At only 20 years old, Chelsea has managed to warm up a mixed audience and with her entire career ahead of her still, she has potential to grow from this amuse bouche-style act to a more developed and versatile musician.

The second support literally bursts on stage after a short introduction of electronic pop sounds. Also based in Sheffield and also 20 years old, multi-instrumentalist and singer Max Restaino. Full of energy and enthusiasm, the young musician works the crowd by running from one side of the stage to another, before taking his place behind his microphone as he strums along to his band with an acoustic-electric guitar. It’s a confusing 20 minutes of cheesy but contagiously catchy pop as he can clearly play a number of instruments, but a pre-recorded backing track is used for his songs as well as his band – which not only takes something away from the live experience, but also distracts from a lot of Restaino’s talent.

It’s a complete juxtaposition in comparison to the last modest performer, as a grand set up of jazzy keys, funky bass, generic male pop vocals and percussion consisting of a standard and an electronic drum kit create this explosive sound. It’s clear that influences from a number of genres are combined, since there are reggae style guitars, jazz style keys and the inclusion of a soulful saxophone – with so many different genres and styles, Max’s sound is surprisingly bland, but the appeal comes mainly from his clear love of his own music.

Cited as one of her influences, it’s no surprise that Whitney Houston’s How Will I Know plays as the lights dim and the audience prepares for Rebecca’s performance. Band members grace the stage one by one dancing to the 80s hit, and they’re greeted with applause. Piano style keys begin the melodic introduction for her recent single Oceans, and Rebecca walks on stage and smiles shyly at the audience’s reception before singing straight into the song, filling the room with her rich and soulful tones.

Her extravagant band of guitars, keys, drums and backing singers create an incredible atmosphere and a sound just as extravagant as her set up – but despite relentless touring obviously affecting her vocals as she clears her throat and takes swigs from a mug frequently throughout her performance, Rebecca’s stunning voice seems to still effortlessly flow over the elaborate combination of instruments. Without hesitation, after a short pause for applause, the tempo is raised even faster for the lead single of her 2014 album Freedom, I Hope, which has absolutely everybody in the room clapping to the punching rhythm and dancing still in their seats.

It’s pretty evident that Rebecca is revelling in joy at the prospect of being at home, and her personal chats with the audience shows how at ease a few hundred fellow scousers make her feel. She discusses how excited she is to go out on the town on this Friday night and laughs at someone’s suggestion that she visits popular gay club Garlands. The delight of the audience having her back on her home turf is also transparent, as the responses to her idle chat prove that you can take the girl out of Liverpool, but upon her return everybody and anybody will make her feel like she never left. A particular moment in which Rebecca leaves the stage and returns having had a costume change prompted a male audience member to shout out “alright geeerl!”, caused whoops, cheers and laughter from absolutely every individual who heard.

Rebecca’s most recent album Superwoman, contains songs of hardship, being a female and not being afraid to speak your mind and do whatever makes you happy. This theme was brought up throughout the night, as she tells of her inspirations for certain songs and preaches of empowerment in women before singing songs with the same message. Her new single Mistress she declares is likely one of the most controversial songs she’s ever written as it directly addresses issues she had recently had with the press involving her relationships.

After an incredibly versatile performance of a mixture of hits from her older and newer releases, Rebecca leaves the stage to a standing ovation, but as the lights aren’t raised and spectators stay seated, an encore is inevitable. What an encore it was, as everybody is coaxed to stand up out of their seat and dance to Chaka Khan’s I’m Every Woman as Rebecca raises the roof singing it with her enthusiastic backing singers. It would have been a fantastic finale to what was already a spectacular evening, but Rebecca decides to slow it down once again after all that excitement to perform her single Bones. Her haunting blues style voice is enough to raise the hairs on your arm, and she is delighted to receive another well deserved standing ovation after such a rendition. “I’m off to get drunk!” she shrieks as she excitably runs off the stage, she deserves to celebrate after such a performance.