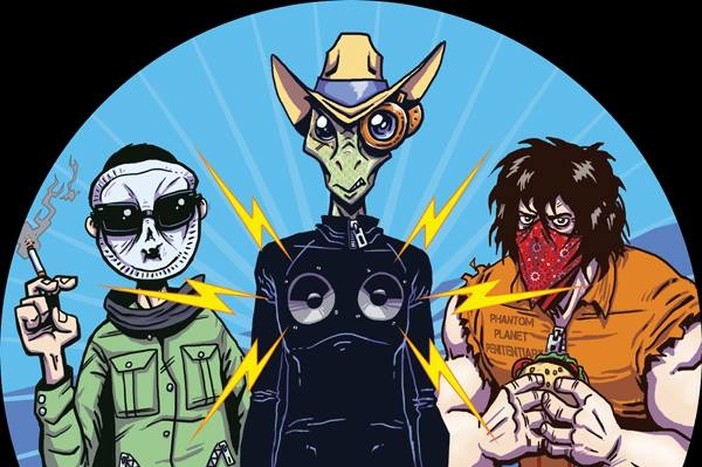 Three strange beings from the Phantom Planet, known as the Phantom Planet Outlaws, have made the journey to earth to bestow upon us their own, very special, brand of intergalactic techno, and hopefully they’ll be able to sort out the American shitstorm they’ve arrived in the middle of.

Our trio is completed by three North West techno legends who are masquerading as our cosmic collective – Mark Forshaw, John Heckle, and Adam Cummings AKA Binny. You’re likely to recognise these names if you spend any time exploring Liverpool’s vibrant underground dance scene.

Mark has been producing and DJing like some sort of techno trojan since the 90s, and was indeed a resident at seminal techno nights Voodoo and T-Funkshun (where this writer first cut his teeth as a clubber, witnessing the amazing aural onslaught of Surgeon for the first time). You will have undoubtedly heard Mark playing as Casio Royale, his electro side-project.

John, too, has been a stalwart on the Merseyside scene. dropping acid techno bombs all over the city (and beyond) for a good while. You’ll also recognise John under his latest alias, Head Front Panel, which is his live solo project, the live jamming skills from which he brings to Phantom Planet Outlaws.

Binny, like his two stable-mates, has been a force to be reckoned with on our local electronic music scene, and has, fairly recently, been seen playing alongside the likes of Detroit Techno Militia, while also releasing his productions on Monnom Black and Orbis Records.

The Phantom Planet Outlaws project is a vehicle for the three to release their collaborative hardware recordings, as well as make a quite beautiful din when they play live together. They are using their brand new label, Boss Tracks, upon which to release their records. You can listen to some snippets from the tracks on their first EP to be released on the label, Muscles from Outer Space, below.

The four track EP can be quite easily likened to an exploding pulsar – showering the listener in gamma rays and cosmic dust while the acid basslines wrap you up in a cosmic belt and jettison you out into the atmosphere, burning you up as the techno takes full hold. All four tracks on the EP are strong, and there’s definitely no filler. We’re all killer here.

Don’t just take our word for it though, listen to the EP here. We’re really excited, here at Getintothis, to see what else Phantom Planet Outlaws have got in store for us – if their first EP is anything to go by

You may well have noticed the awesome comic-book style artwork that accompanies the EP, and other Phantom Planet Outlaws media. We have it on good authority that there’s a whole storyline for the three characters – Forsh, Red Defender, and Bin Man – with artwork to match. The artist responsible for these awesome illustrations, and who will be producing the artwork for all releases in future, is Alan Kerr, who also goes under the pseudonym Deadboy Designs. His website is WELL worth checking out – you’ll love it if you’re into your comic art.

Mark has kindly taken the time out to record a special edition GITmix for us, to celebrate the launch of Muscles from Outer Space and Liverpool’s newest techno label, Boss Tracks. The mix truly captures the ethos of PPO – full of blistering techno and acid. It’s an absolute blinder, as you’ll see from the tracklist. Stick this on and rave the shit outta yourself.

Stanislav Tolkachev – No matter what they’ve told you

Bantam Lions – Up To You