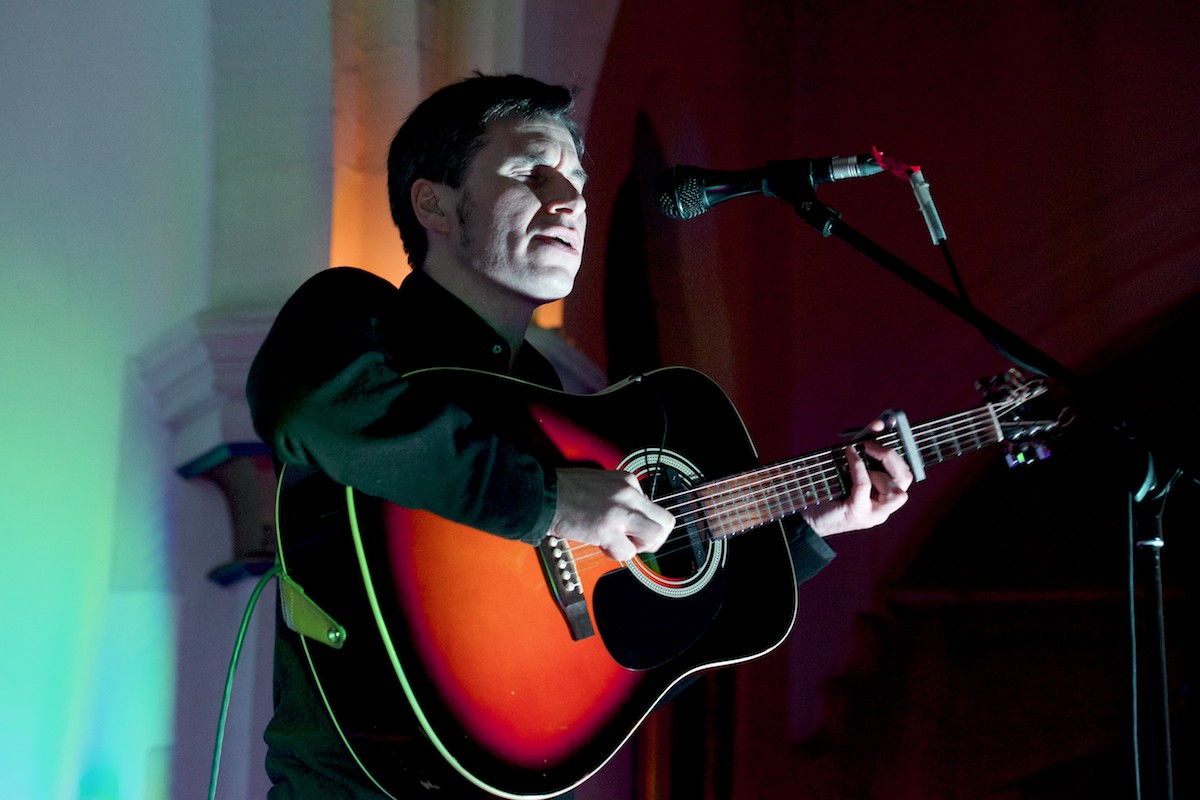 As Nick Ellis launches his Daylight Ghosts solo album, Getintothis’ Paul Fitzgerald was there to sample the soulful delivery of one of Liverpool’s finest musicians.

Nick Ellis has had a productive 2016 to say the least. From beautiful strength to the strength of beauty, he’s enlivened, enthused and encouraged by the reception he’s received, and responds well to the positivity which surrounds his music and his fascinating trajectory.

There was the release of his superlative Grace and Danger EP, support slots with people such as Steve Mason, his part in the Bido Lito LIMF commission From Liverpool With Love, which saw him performing alongside Dave McCabe, Edgar Jones, John Power, Mike Badger and Tom Blackwell in Sefton Park on a balmy Sunday afternoon as a part of the multi-headed Johnny Echols band, and now, in the final stages of this most memorable year, a sold out show at the Nordic Church to launch the new album for Mellowtone, Daylight Ghosts.

The church pews filled, the lights dimmed and the candles lit, Ellis took to the altar, and worked himself into the mood slowly, the reflective and pensive nature of such a venue leading the audience into a quiet reverence as the gradual build of the opening guitar lines of The Grand Illusion floated around and above us.

His hynoptic method of playing, cyclic and absorbing, pulled the audience toward him and this great song of disillusion. A frustration with the current human psyche, and the ill balanced status quo, and the dashing of hopes as a result. And this, just a couple of days after the US election. A telling song for telling times.

Ellis has a singular way with structure when it comes to his writing. Those bluesy soul guitar rythyms, turning and repeating, and forming a spellbinding underlying platform for the stretches and howls of his voice. And its some voice. He leaps around the melodies as if writing them on the spot, and is gifted with a naturality and purity of voice that other songwriters spend decades trying to master. It’s plain, and its clear.

Nick Ellis is a fine songwriting talent, and one in which this city of lauded musical tradition should be proud. And in the truest, purest definition of the craft, he is a storyteller, a modern day observer, a true folk performer.

Check out our Autumn/Winter gig guide, for more musical delights in Liverpool.

His pithy observational eye, his focus on the characters he meets, the lives lived, and his sweet delivery of these tales, these incredible insights pull the listener in, again, hypnotic and entrancing. Through those characters, those situations, he spins the light round on us all, changing the focus onto our strengths and our weaknesses.

Everyday stories like Electric Blue High Heels capture these characters in the mind, and place them square in front of the listener, breathing life into them, and turning the lyric into collective experience. Again, a skill too few possess, and one which is at the true root of Ellis’ writing. Lovers In July is another highlight, delicate, frail and beautifully imagined, in the church, here on this Saturday night, with the lilting guitar and slight crack in Ellis’ voice.

The crowd at the Nordic Church saw a man doing what he’s always dreamed of doing. Taking these tales to others, enjoying them enjoying him, and ebullient, relaxed and charming in his gracious appreciation of this incredible year. He’s emboldened and seems possessed by a new fresh positivity and confidence which will no doubt lead him and us to higher plains.

It takes a performer of some gumption, with some balls, to attempt any Echo and The Bunnymen song in this city, but to tackle a classic such as Lips Like Sugar, and to get possession over it, truly owning it in his own vision, his own interpretation proves the huge worth of this absolute craftsman. An incredible and achingly beautiful version, and absolutely the perfect finish to a wonderful, positive and uplifting set from a man so perfectly placed for such a stunning future.

The evening had begun earlier with a set from Cousin Jac. Centre stage with just a keyboard we saw a haunting set of pianos ballads. Tales of movement, stories of travel and the sea, mostly taken from his new album Land Of The Living,  it was a performance so perfectly suited for this most special of venues, plaintive, reflective and highly addictive.

The release of the album, his 2nd, will hopefully bring much worthy and well deserved interest, and his pairing here with Nick Ellis was ideal and perfectly judged. Another night of Mellowtone wonder in another very special venue, this was one of those nights were we felt warmly privileged to have attended.

All images by Getintothis’ Martin Saleh.

Nick Ellis at the Scandinavian Church