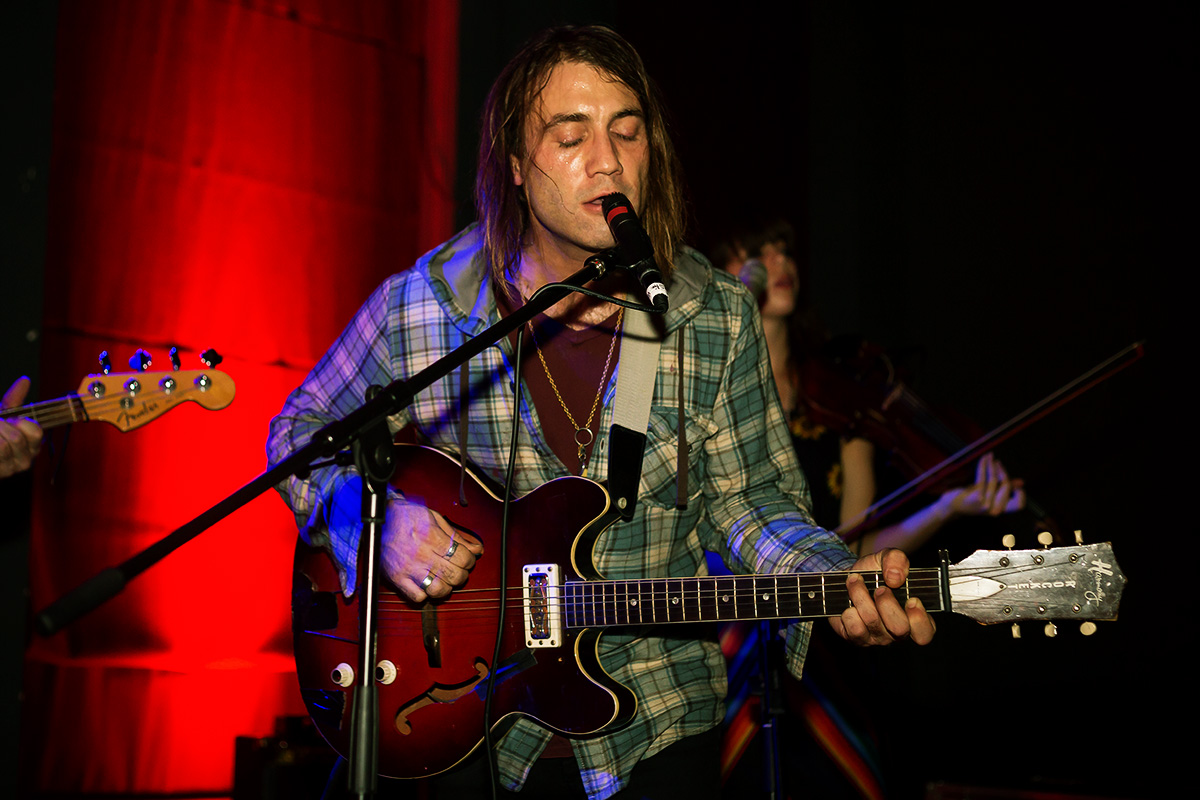 Their last Merseyside showing firmly written into Liverpool live scene lore, the American quartet had a lot to live up to, and Getintothis‘ David Hall was on hand to find out if they could do so.

The Rhode Island four-piece returned to Liverpool off the back of their fifth album Eyeland, having achieved breakthrough on their Bella Union-released third record Oh My God, Charlie Darwin.

They last brought the house down last time out in Liverpool, riding high on the success of Charlie Darwin‘s follow-up Smart Flesh in 2012; that night they dispatched a near-legendary set at the Kazimier. That was during high times for the band, who bagged a Bruce Springsteen support slot shortly after. But The Low Anthem are a very different group of people than those who last took to a Merseyside stage, losing a core member and seeing their lineup revolving somewhat uncontrollably in the meantime.

They’re now the sort of band who sport a giant gong, and whose attention to detail extended to playing a typewriter live (no, really), creating birdcalls and casting stones about their hands beneath microphones onstage. Either you were into their Godspeed-esque intro or you weren’t, but it proved a bit too pretentious even for Getintothis‘ wide-ranging taste.

Before that, support at Leaf on Bold Street came from the Googleproof And The Kids, playing poppy shoegaze meets electroclash. Overall, while the highs were great and the crowd really responded, the lows were muddled and half-formed and flattened the audience. Just when things threatened to get interesting in a hail of JAMC monitor whistles, they shied away from really burying the hatchet. Still, their main vocalist was laid low by illness, and their drummer impressively played xylophone and drums simultaneously at times, so we’ll reserve judgment.

The Low Anthem returned with news that 2016’s long-awaited Eyeland will be joined by more work currently in the pipeline. They previewed a track from an as-yet untitled forthcoming record, a fragile guitar arpeggio ridden by a falsetto vocal.

Little from their first two self-released albums was aired, aside from This God Damn House, played atmospherically on organ with a bow-and-saw backing. But the hushed, soulful Appalachian folk preferred on Oh My God, Charlie Darwin was only on show in flashes at Leaf.

Tracks like Apothecary Love or Ghost Woman Blues – both from their strong and confident Smart Flesh record – worked well, but most songs were culled from Eyeland, and landed uneasily.

A puritan, chamber pop vibe carried through In The Air Hockey Fire, and a Leonard Cohen cover of Bird On The Wire. However, Boeing 737 was transformed into a blaring, thudding affair, but even paled in comparison to the roaring, PA-withering din of Ozzie or Am I The Dream Or Am I The Dreamer.

Overall it was a weird, sweet and sour experience, the band often conjuring distorted guitar noise, then expecting the deafened audience to come with them for hushed, barely-there songs. The Leaf crowd were decidedly unhelpful, pockets of conversation stubbornly refusing to dissipate despite insistent shushes from all around. There was also some sort of incident involving a person collapsing and paramedics being called; we didn’t get a full view, so best wishes to anyone genuinely taken ill.

With regard to the music, who could blame the audience for being wrong-footed by a sound that lurched from towers of noise to pin-drop quiet? We forged out into the wintery night from Leaf struggling to dissect the experience, but the overriding emotion was disappointment that The Low Anthem had simply pitched their gig incorrectly.