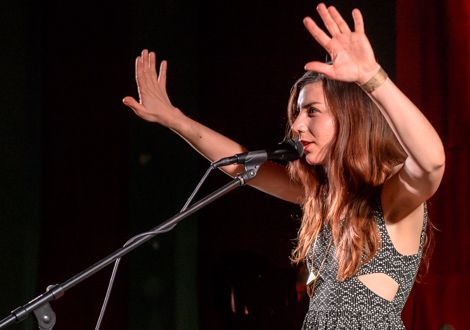 The Manchester Cathedral is a music venue which always offers an incredible experience for all who attend. At over 600 years old, the architecture presents an unmatched atmosphere, offering something calming over the usual pubs and clubs that host musical acts.

The acoustics are spectacular thanks to the design, leading to a full sound that has the ability to enhance a bands live performance by default. Julia Holter mentioned all this, overwhelmed simply by being there, rather than playing at fake reproductions which infest her hometown in Los Angeles. It was a night of keeping it real, be it the building itself, or Holter’s own take on music. No reproductions here.

As the music reverberated throughout Manchester Cathedral, one might have begun to wonder just how to describe the sound they were hearing. Julia Holter is a little bit pop, a little bit jazz, a little bit drone, a little bit poetry and a little bit just about everything. There is no pigeonhole in which Holter‘s music fits into, so how can it be easily described to someone unaware?

With a combination of vocals, cello, viola, drums and keyboard, the music felt incredibly busy, initially overwhelming to the unsuspecting listener.

Each track was it’s own unique wave of sound, washing over the crowd, and it was up to each individual to swim through the layers. Some waves were easily ridden, others were more about diving in, and letting the textures hit you as they came.

Material from ‘Have You In My Wilderness‘ was the central focus, almost pop merging melancholic lyrics with upbeat jazz, ‘Lucette Stranded on an Island’ and ‘Betsy on the Roof’ acting as bookends to everything in between, before the ambient jazz of ‘Vasquez’ and the actual pop ‘Sea Calls Me Home’ took on the role of concluding the night. ‘I can’t swim, it’s lucidity!’

Though starker darker pieces weren’t off the table, with a selection of songs played from Holter’s debut ‘Tragedy’ bringing out the poetry and the drone (not drones) in her. ‘The Falling Age‘ wouldn’t be out of place at a Low gig (who played this venue just last year), or even a Godspeed You! Black Emperor one, with the density stripped back in favour of minimalist menace.

The poetry attached to the song which made reference to heaven had extra weight thanks to the setting, a moment when both place and piece became one.

Check out our pick of Manchester’s best gigs in November

There was no sense of songs merging into each other, becoming indistinguishable, as each side of Holter was on display for all to see, for all to hear. The four albums put out so far all display different modes of operendi from the artist, and mixed together in a live set shows just how workable the different elements are with one another. Nothing was jarring, just surprising.

It was Julia Holter herself who went and put the sound of the band into a single word. As she began to play a brand new piece ‘Heijinian‘, it was labelled as the ‘latest experiment’.

A series of experiments, that’s how you describe the sound of Julia Holter, each piece its own beautiful unpredictable entity. It’s as real as can be.