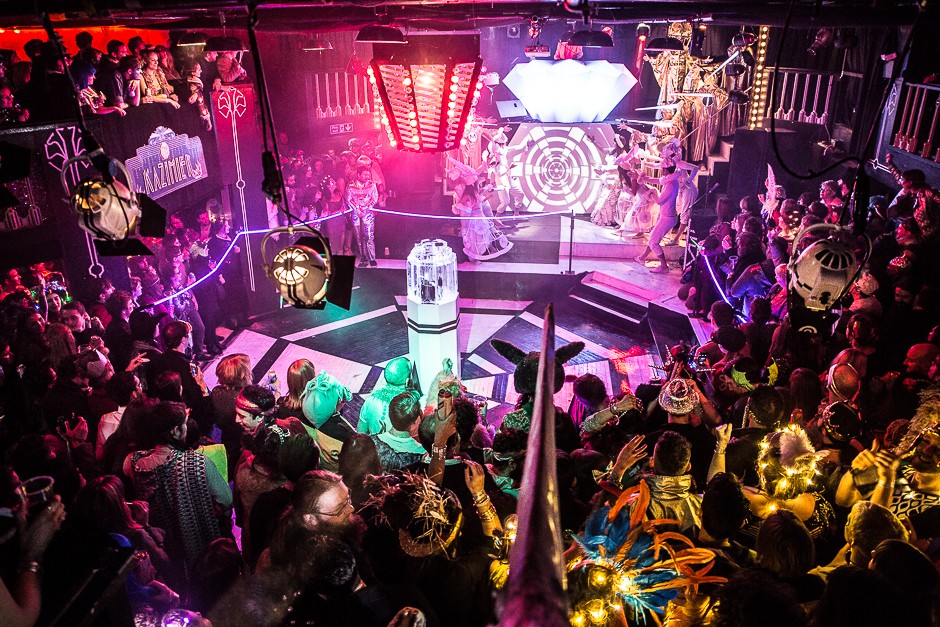 As the Kazimier team announce plans for their New Years Eve event at the Invisible Wind Factory, Getintothis’ Adam Lowerson has the details.

The Kazimier team have announced a New Years Eve event at their new North Docks venue, the Invisible Wind Factory, following on from 2015’s Escape to Planet Kronos event which brought the iconic Liverpool venue to a close.

Speaking on this year’s show, the Kazimier said, “To celebrate this year of transition, The Kazimier will again hold a huge New Years Eve party, transform- ing their new space into an immersive world from the future.

“Featuring walk-through installations, vast set-design and aerial performance, the night will display the potential this building holds. Kazimier New Years Eve parties have been built on the mythical tale of ‘Captain Kronos’ – a time travel- ling hero and his intergalactic adventures – this year the story will tread deeper into an ominous and sinister territory.”

Relive Escape to Planet Kronos with our review and gallery

Details regarding this year’s New Years Eve party are still somewhat a secret, but if last year’s event is anything to go by, it’s sure to be a spectacular end to the year.

Escape to Plant Kronos took part across three venues, and featured over 200 performers, an 30ft robot and spacecraft flown into the night sky.

Update statement from IWF: “Prepare yourselves for our latest discovery. On 31st of December 2016 a rare gateway will open in the very fabric of our universe. Our data shows this portal will form a direct link between our world and the fabled city of Kronia; birthplace of time. We invite you to join our exploration team on this groundbreaking and historic mission into the unknown.”