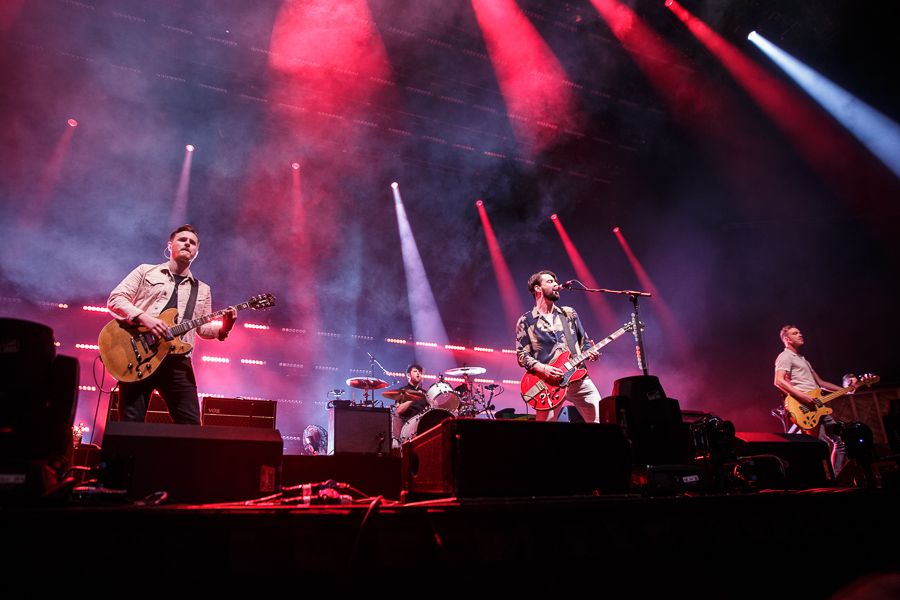 The Courteeners brought their flares to Liverpool’s Echo Arena and Getintothis’ Nathan Scally was there to enjoy the spectacle.

Clean Cut Kid made their homecoming in a criminally short set. The crowd was sparse at this point for obvious reasons, when you’re first support an arena there’s only so much you can hope for. It’s a tougher job than you think, not knowing whether anyone there has even listened to you before, never mind actually likes your music.

There’s a huge mist of uncertainty in the air, but the set goes down a treat. They’re easy listening pop indie sounds something like you’d get on a FIFA soundtrack but this crowd gobbled it right up. It’s fair to say if you weren’t a fan beforehand then everyone is most likely more than convinced now.

Next up was noughties indie legends Milburn. Having reappeared just as suddenly as they disappeared circa 2000’s they probably pull in a bigger crowd than before. The new age of Spotify surely has a lot to do with it. Their set rattled through the best of the old and a few new tracks off the newly Bill Ryder-Jones approved (he produced it) record. The floor began to fill up quite nicely through the set, a decent number used it to warm up their bones from the uncertainty of the weather. Is it going to chuck it down? Or will it merely rain? No one knows.

If you haven’t exchanged fluids before the band come on is it even a real Courteeeners gig? A few cups of the terrible warm liquid did rounds before the lights went dim. To distract you from the stain left by Paul from Middleton, Morning Glory was belted through the arena as a group vocal warm up and a little reminder as to where the band are from (as if we needed reminding).

Courteeners fans usually carry a not so flattering perception around, labelled as yobs or hooligans. It’s easy to see why, the flares and chants don’t do much to change the outlook. But, generally this is a group who look after each other and don’t go looking for a fight (they’re not blameless but most fights are amongst each other). Unfortunately two guys have to drag the tone down. But no one let that ruin their evening.

The whole set was so well received they don’t need microphones anymore. Every single lyric is belted back to them in unison, a real uniting moment full of love.

The band belted through their back catalogue, some old, some new, all great. It’s refreshing to have no breaks, no unnecessary encore breaks. Why waste 5 minutes when you’ve got another tune to slip in?

Usually the flares are saved for the last group of songs but security seemed to have a night off. Flares everywhere all night. Sure they can be dangerous but they take a damn good picture.

Before the first note is even What Took You So Long is flying around, fans in unison, friends are made, friends are reunited. It’s a predictable but last song but if it ain’t broke don’t fix it. Whether you like them or not, they put on a show.

This is just a taster before their huge gig at the Old Trafford Cricket Ground. Some of Manchester’s finest old and new, it’s going to be a special one. God bless the band.