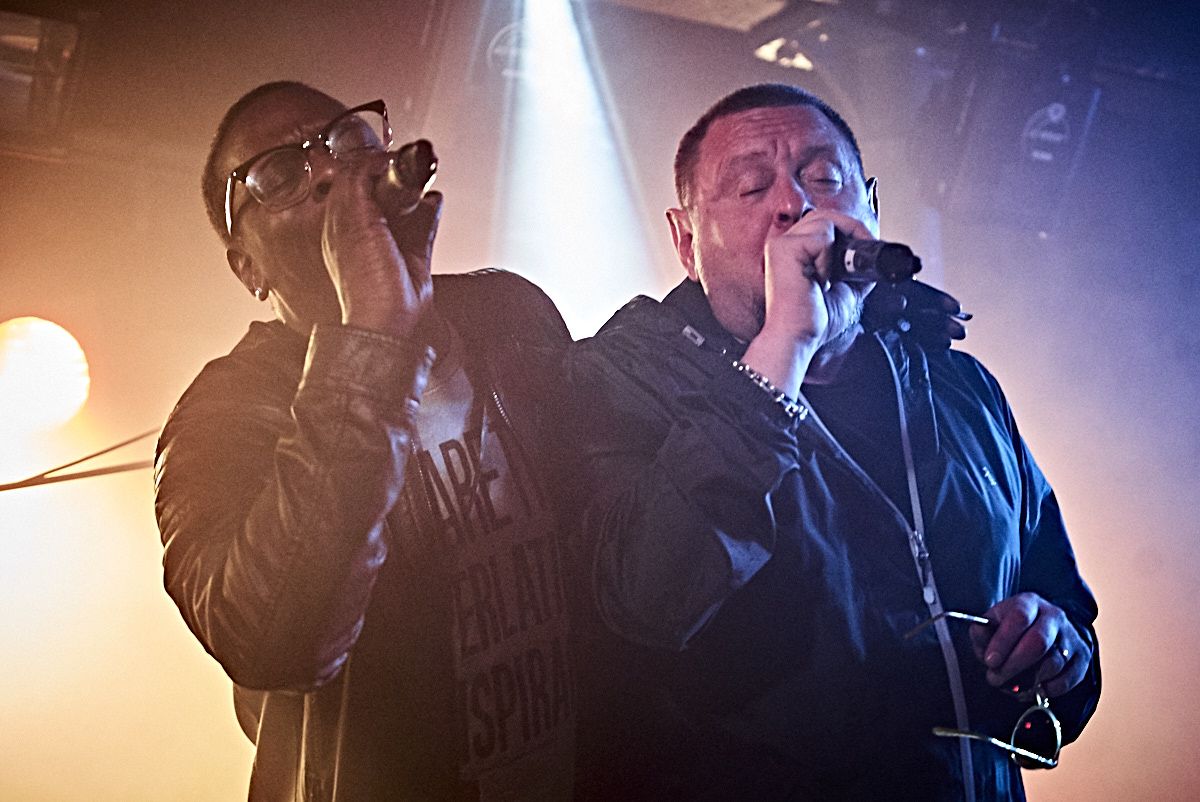 Those 90’s baggy funksters Black Grape decide to celebrate their number one LP and Getintothis’ Howard Doupe trundles down to the O2 in search of a rave up.

It’s a familiar story: controversial band becomes massive via a drug-fuelled sub-culture, band implodes, out of the ashes comes another. However this particular story surprisingly churned out some killer tunes that people were interested in. Spearheaded by the unique talent of one Shaun Ryder– the man who took one too many drugs, starred in one too many celebrity TV shows- and the equally impressive Kermit.

This particular ‘reunion’ tour which coincides with 21 years of their platinum selling ‘It’s Great When You’re Straight…Yeah’ finds Black Grape re-energised, focused and ready to celebrate. Would the nostalgia filled crowd be as up for it as they were first time around?

Alias Kid, whose swaggering rock rooted firmly in a Mancunian mould had the job of slowly bringing the crowd in. Plenty of attitude and thumping basslines. Three guitarists made sure the intended wall of distortion and thumping basslines came through loud and clear, both brazenly and unapologetically.

With two frontmen sharing duties, the sharp harmonies that soared on new tracks No Way Back gave way to plenty of classic rock riffs and crowd clapping breakdowns. Third song in and a track with multiple ‘yeah yeah yeahs’ in the title begs the question of a greater nod to Liverpool culture or just swagger brimming over.

A typically dreary Mancunian day alleviated by bucket loads of new talent; what we learned at the Off The Record festival

The plodding love-esque track in the traditional sense She’s Blowing My Mind gave way to foot-tapping, predictable lines and heart on sleeve sentiments. Sprinking of daze and gaze in a yearning blissful state.  One memorable moment came in the form of resorting to singing lines from The Sex Pistols Anarchy in the UK and slagging off Theresa May.

Saving best till last, closing track Messiah brought together their best riffs, hard-hitting tumbling bass and pounding drums – and more ‘yeah yeahs’! What came through was their enjoyment of the whole set. Here’s a band who won’t score many points for originality but defiantly love what they do.

Post-support act, pre-gig tunes kept the crowd firmly tuned into the Black Grape vibe with plenty of fans mirroring classic house-scene shapes of yesteryear. As the lights dipped and the band took to the stage and the venue electrified. First to prowl the front was Kermit looking lean, focussed and ready to enjoy the celebration of the last 21 years- an admittance that something that stood the test of time actually was created. Smiles a-plenty, Shaun Ryder joined the party.

Choosing to deviate slightly from the albums order the band dove straight into In the Name of the Father like they’ve never been away. Plenty of ‘Manc banter’ as the crowds drug enthusiasts are welcomed before they launch into Tramazi Parti and the dance-pit surely gutted that rave whistles weren’t given out on the way in.

Album classics like the single Reverend Black Grape had the crowd absolutely behind this band, at this point soaring on the nostalgia of an era well and truly experienced on a higher plain. There was a harder and grittier sound live in comparison to the record which really helped create something that demanded the audiences attention. Bass breakdowns that James Brown would be shaking the lid off to clamber on stage to and full on ballsy guitar gave the songs something extra. Impromptu crowd chants of Stonesy ‘whoo whoo’s’ fit perfectly with the mood. The song climaxing with a fully laden wah guitar wig out. Who loves rock n roll more than funk? Ryder and Kermit argued their case!

Light hearted in between song banter flowed throughout the set with a running commentary of Ryder’s ongoing dental work gaining a few laughs before going into Shake Well Before Opening. A Big Day In the North had Ryder giving praise, ‘no more Northern than Liverpool’ – crowd pleasing for sure.

After a 50 minute set the band returned for an encore that included Kelly’s Heroes and album closer Little Bob. Chants follow as a triumphant gig ends.

As the crowd shuffles off to A Guy Called Gerald classic Voodoo Ray it begs the question- who in today’s increasingly diverse musical landscape is filling the void left by the euphoria found in Black Grape? Absolutely no one. Potential claimants form an orderly clue if you think your vibes ride high enough.