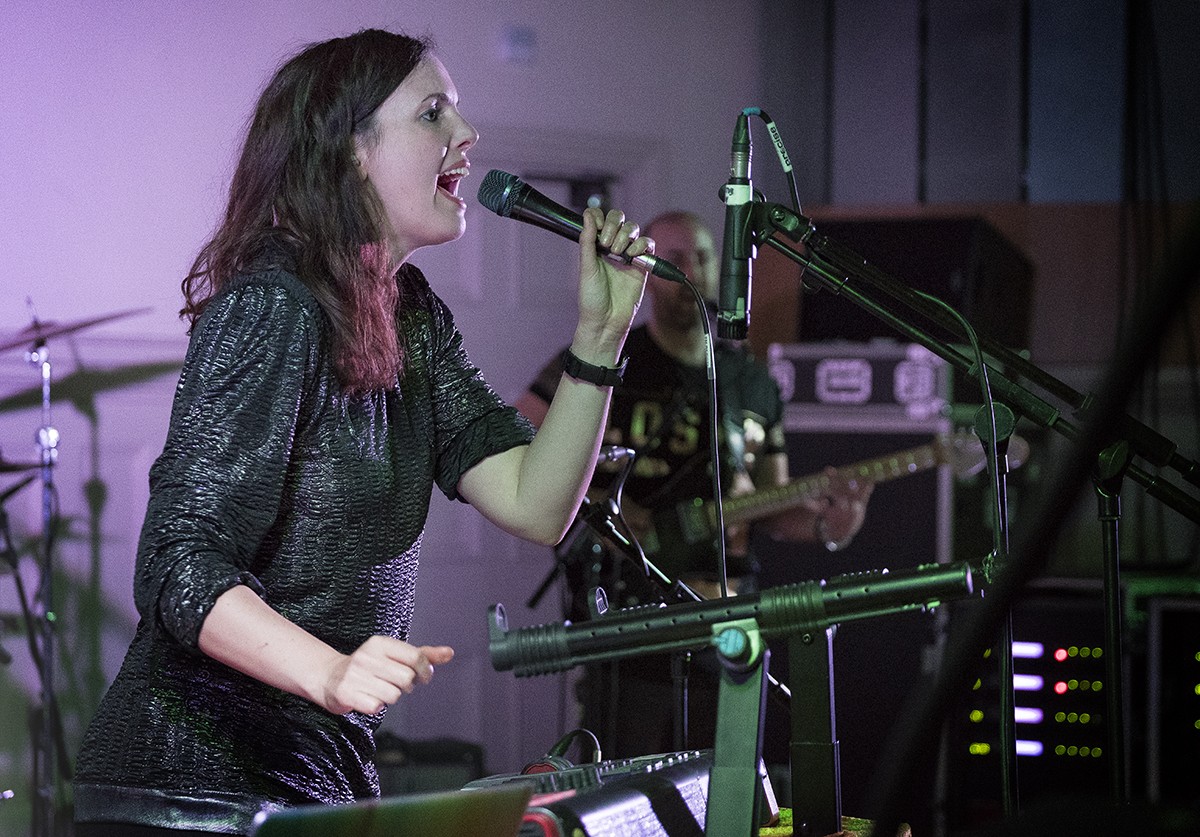 As Anna Meredith brought her songs to life on stage at Liverpool Central Library, Getintothis’ Mike Everett was lucky enough to be there.

Anna Meredith’s debut album Varmints has been a piece of work that I have delightfully dipped in and out of since its release in March.  Having never actually seen her live I had already built up some preconceived idea of what her show might be like.

I imagined it would be innovative and classical, but at the same time genre defying, all of which led me to believe that this was to be a night that would show off the talents of a “serious” artist. I was half right; what I didn’t realize I would also get was a warm, funny, slightly goofy bandleader that invites us all into her delivered experience.

The album suddenly took on a much more human feel than the atmospheric, dynamic and experimental tone of its recorded piece. The band replicated the opener Nautilus , booming tuba in tow with added gusto. The whole industrial/electronic feel was brought to life by the intense intricacy and concentration needed to perform such tracks.

Although sonically quite far apart I could still hear something of Ex Easter Island Head‘s most recent performance inhabiting the delivery with similar will and precision.  The drummer shared giggling glances at Anna and the tuba player that belied the bombastic nature of the actual song.  Such difficult songs to play would leave many a band member simply worried to just replicate what was on record.  There was a total abandon in the bands approach.

This fed it itself outwards into the crowd who were willed on by Anna to get their dancing shoes on.  The song Taken also became much more anthemic than on record.  The lyrics “Forecast failing. The heat they said would sweep the land has failed to touch the cold that lines the sides of these four walls” turned from something deadpan to something human, conveying real people’s worries and concerns.

Something Helpful delivered a pop tune that sounded like a cross between Saint Etienne and recent PC Music artist Hannah Diamond.  The glockenspiel punctured song is possibly Meredith’s catchiest song. The crowd had started to throw their idiosyncratic versions of dancing around that would definitely have got you lashed out of the library in the daytime.

Next, the band took it down a couple of notches with Honeyed Words, a whoozy cello led track that is at once melancholic, hopeful and taut. Something so elevated that has a sense of anxiety adds to the otherworldliness.  This is the thing with Varmints, it is a marriage of different ingredients that leads to ever revealing layers of feel and sound.

Just when I thought I had learned more about this artist in the space of an hour there was still another unexpected avenue to turn down. For the encore we were treated to a distinctive A Little Respect by eighties synth pop legends Erasure.  It was bloody odd, slightly hilarious but also quite brilliant.  People got a gig’s worth of music to behold as well as being guided through a great show.

So now we can add entertainer to the composer tag. Never judge an artist’s personality by their output.  What folly.