As Sleaford Mods make a ferocious return to Liverpool, Getintothis’ Del Pike samples their unique brand of 21st century shouting and discovers its a wonderful thing

The Sleaford Mods tour has guaranteed a hot ticket event every night and the reason is simple, there’s literally no-one else like them. Its easy to draw comparisons with The Streets, John Cooper Clarke and Beans on Toast and they are all fair comment, but the Nottigham duo have crafted a sound that is entirely their own.

They bring with them tonight Ceramic Hobs. Formed in 1985 in Blackpool they are an experience like no other. No matter how long they have been on the circuit, their performance is still fresh and startling. With lyrics that are virtually impossible to understand and an extreme noise approach, their appearance is equally as visceral.

The band members include a killer clown (topical) in an inflated outfit brandishing a dolls head and a distortion pedal, a masked killer (Simon Morris) with a bloody apron that reads “I will smoke Oxo” and “Kill Agen [sic]”, and a keyboard player who at one point plays the keys with her bare bum. And of course there is a dog, a real dog running around the stage. Its wonderful chaos that’s not for the nervous. It’s difficult to criticise a band who are already going to give you nightmares, but in fairness they clearly have quite a following of men of a certain age and they’re great at what they do. The highlight of the set may well have been the clown kicking off on the other band members.

Perhaps more in keeping with Sleaford Mods is Cappo, a young Nottingham rapper who is confident and deals with all of the issues that you would expect from a young rapper from Nottingham. The title track from his new album, Dramatic Change of Fortune follows similarly well trod paths, with aspirations of a better life. He is joined for a short while by his two buddies, one is a large lad called Juggernaught and they call themselves Triple V. This doesn’t work quite as well, but they do manage some old school rhyming before Cappo finishes off on a solo spot. Love Letter From the HMRC tells of a rebate that helped him set up his own studio, so not all bad news from the street then.

The Mods turn up bang on time and deliver an hour’s worth of tight as hell spit and vinegar, belted out over hypnotic, pulsating beats. Williamson is a storyteller who tells contemporary horror stories that are often as funny as they are tragic. Some new songs are given an outing tonight , mixed in with tracks from their recent TCR E.P and a few old favourites. The lyrics are fast, so fast its surprising Williamson hasn’t had an aneurysm, but the fans know every word. TCR track I Can Tell which makes an early appearance in the set finds him channeling John Lydon in a manic warble towards the end and Face to Faces is pure Sleaford Mods attack mode.

Williamson is a sweaty wreck about four songs in and complains that they didn’t bring a fan on tour with them, Fearn as usual laughs and looks like he’s got the best job in the world. The tunes are seriously as important as the lyrics, but Fearn simply hits return on the laptop, stands back and enjoys the ride, drink in hand and cap on head. He’s slowly becoming an icon of the Bez variety but undoubtedly more talented.

Dad’s Corner from the new E.P is brilliant and funny and finds Williamson Dad-gurning and taking the piss to new levels. When he’s enjoying himself he easily slips into a range of characters as diverse as the Carry On cast. Their certainly as British as Carry On and they have become part of the recent wash of socialist spokespeople that would include Jeremy Corbin and Ken Loach (see: I, Daniel Blake). The band claim to not be about party politics, which only heightens their stance as outspoken socialists, rallying against bureaucracy whatever mask it is wearing.

Fizzy is a prime example of that with a general berating of the management class, building up to the screaming cry of “Sack the fucking manager” at the end. This is the song that stirred the crowd tonight, a trigger to a great deal of moshing and chanting. Without this level of aggro, a Sleaford Mods performance would be futile.

Songs like Moptop, Notts Head and the off the scale brilliant TCR, keep the crowd mesmerised as Fearn grins and Williamson gesticulates in almost Tourettes fashion, scratching and twitching relentlessly. Often he becomes camp, “oohing” and “ahhing” between songs before returning to that bloke in the pub no-one wants to sit next to. Its hard to tell how much of this is an act, but its brilliant work whatever.

A tight encore brings the true classic in the Mods canon, Jobseeker. A song that anyone who has ever had the pleasure to sign on will relate to, a partly comic, partly agonising converstaion between the singer and the dole clerk that once again reaches an orgasm of “Fuck Off” like so many of their songs do. Giddy on the Ciggies is another crowd pleasing favourite that goes down a storm and their final offering Tied up in Nottz is priceless. It contains the opening line “The smell of piss is so strong it smells like decent bacon“, an opener easily as passionate as “There are places I remember, some have gone, and some have changed“.

Sleaford Mods live are harder and more affecting than their recorded output and any more than an hour would wreck your head, and theirs no doubt. An absolute force to be reckoned with and they are unique. We need bands like Sleaford Mods as much as we needed The Sex Pistols and The Smiths, maybe we just haven’t realised it yet. 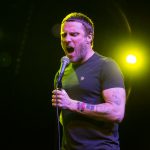 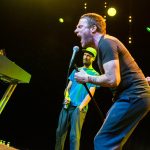 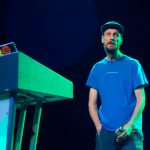 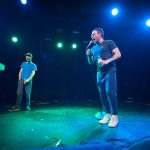 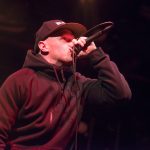 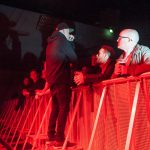 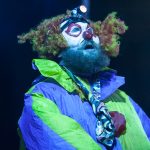 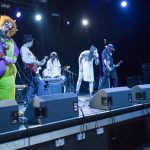 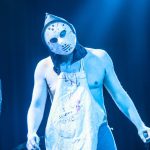