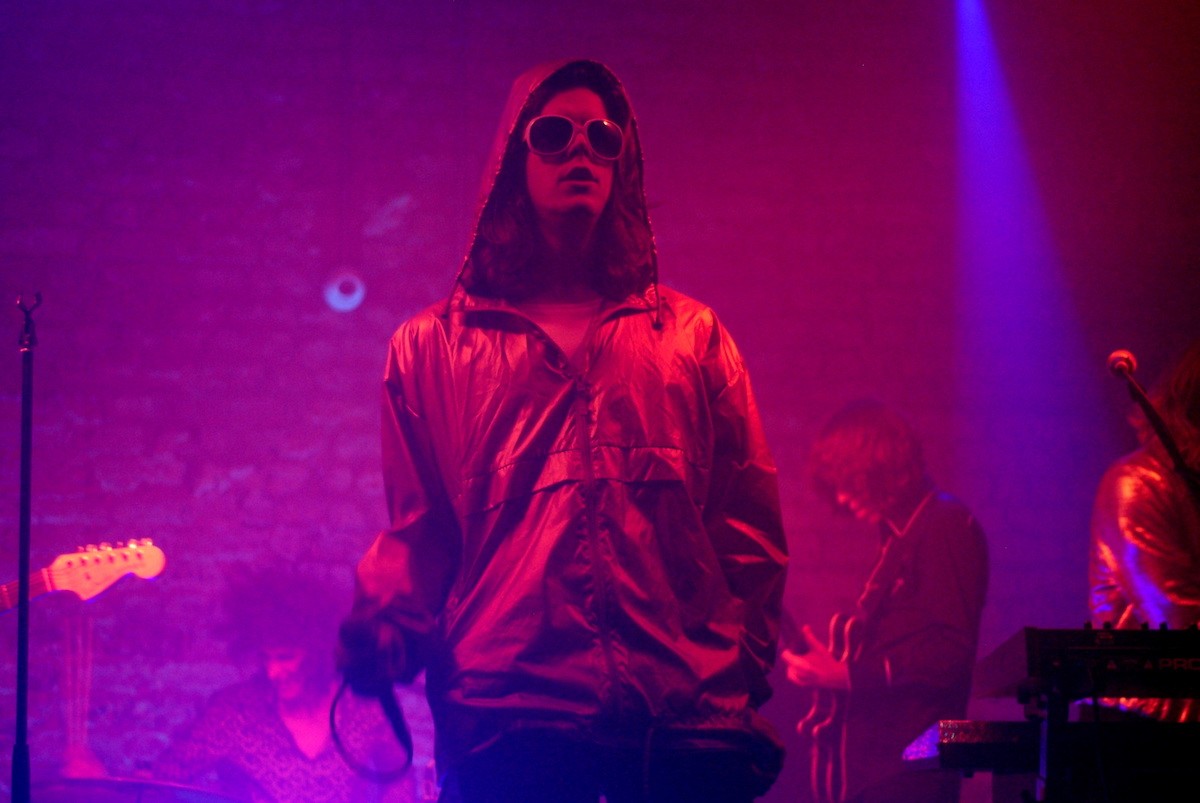 Buyers Club is a lovely little venue tucked away up Hardman Street. Obvious when you know where it is, but to the untrained eye probably just a hole in the wall. Luckily this reviewer is with someone who has been before and can navigate.

The first support act for the evening are Merseyside young’uns Red Rum Club – A six-piece that just about fit on the stage. Newly signed to Rooftop Records they’re out to make a name for themselves. Every good band has that something to make them stand out from the crowd, for some bands it’s the lyrics, others you’ve got a unique style, for these boys it’s their brass man. This instrument in particular adds that little (it pains inside to say it, but) X factor. Taking nothing away from the individuals, they can play, but the man on the horn brings a whole new element into play that barely any band has tapped in to.

A downside to this is for such a small band it’s easy to see them as a mariachi band flogging you a tortilla chip, but in the same breath they could be the lead track in a Tarantino soundtrack. Music is subjective of course, making them a real marmite band. The star quality is there in the waiting, as they grow with each gig you feel they can only get better. The only thing standing between them and a big hitting album is being in the right place at the right time.

As the second act Bribes open with their first tune it becomes obvious that the bands in front of us tonight don’t have an awful lot in common genre-wise. All three have a niche just waiting to be tapped into. But it’s this middle act who stick out the most, that’s not necessarily a bad thing. They might be a tad older than your average support but boy, do they know how to write a tune.

There’s a certain Royal Blood simplicity to the sound which carries most of the charm, guitar, bass, drum, the classic cocktail. In a normal situation a break mid-set would break the performers spirits, yet in this case they actually return even better than before. That could just be the way the setlist was meant to pan out in the first case, but nevertheless everything runs a whole lot smoother.

Sometime between Bribes leaving the stage and The Shimmer Band tuning up there must have been a fire alarm or something as a decent chunk of the crowd has vanished into thin air. Much like gaining weight, it happens all at once and you’re left bewildered as to what happened.

Just before its stage time, a few creep back in to fill out the cracks left behind. The Shimmer Band are an odd band to experience live, their songs are longer than most, but not so much that you’d notice that specifically. But in a live setting, time passes by so quickly and they’ve only played three tunes. This is a clearly talented group we have on our hands here, with a very large sound. Sadly it doesn’t carry so well inside with a tad too much echo, but these kind of shows are the audition for the bigger stage.

Their frontman has a very odd stage persona about him, it seems as if he’s a little bit miffed about something. A few punters can be seen grimacing at whats in front of them, its nothing in particular just the whole body language in play. The man on the keyboard brings an underlying sound closer to Peace than anything else, this is obviously their unique point to stand them out from the rest. Final song Shoot Me (Baby) blasts through the room, its a shame they’re not playing to bigger crowds, these tunes could really get you moving but that should sort itself in time. Suddenly it’s over, their frontman has bolted through the crowd straight out the door before the drummer has even put down his sticks, it feels a bit of a hit and run job now but a highly enjoyable one. Evol have done the deed again and continue to bring us the finest young talent around.