As Scott Fagan brought his lost classic album to Liverpool’s Philharmonic Music Room, Getintothis’ Paul Higham finds it to be well worth the wait.

Sometimes the best things in life are worth waiting for. And so it proved when Scott Fagan finally brought his South Atlantic Blues LP to these shores. We say finally, but for many, this is something of a late discovery. First released in 1968 the record is very much a lost classic. In both senses of the phrase.

Indisputably on the basis of tonight’s performance it is a classic. Rich, dolorously soulful yet warmly upbeat it is a record that almost defies categorisation. It feels at once part of the scene from which it emerged yet entirely separate; standing as a unique mythical monument to Fagan‘s talent, vision, imagination and the scope of his ambition. Undeniably, too, this is a lost record. A genuine lost record and not a mere marketing ploy to increase the reach of a hitherto accepted classic to a new generation.

Some in the audience were unfamiliar with the record; others (this writer included) only becoming aware of its charms when Harvest Sun announced the gig back in the distant haze of mid-summer. Fagan himself affirmed as much in his amiably rambling intro, specifically thanking the promoter (referred to as Mr Lynch, no less!) for putting on the gig while expressing gratitude and a large spoonful of surprise that he’d been a fan of the record for the past ten years or so.

It speaks volumes about the power and resonance of the South Atlantic Blues that it has captured people’s imaginations so long after its initial release. When you hear ‘timeless‘ being bandied with frivolous adjectival abandon it’s all too easy to cynically mock; come back in 50 years and see how it has fared, you might say. Will it still sound as fresh and vital then?

If not quite 50 years later (but not far off), South Atlantic Blues sounds like a miraculous artefact delivered shrink-wrapped from 1968 but could just as easily have come from this or any other era. Tonight Fagan, looking every bit a Robert Wyatt doppelgänger and unrecognisable from his pretty 21 year old self (who, so he recounted with a sense of pride, once had Richard Gere as his understudy in a Broadway production) that adorned the promotional posters, played the album in full from start to finish.

Hearing it played live, and the words that come from the granite-like, grizzled and weather-worn singer delivered with a belly-deep baritonal permanence, makes any notion that this was first performed by a wet-behind-the-ears 21 year old feel incredulous. It requires a huge suspension of disbelief. The songs seem to suit him. They seem written for him as now not him as was. Both his physical presence and myth-worthy back-story (to which there are many allusions tonight) lend them an air of deserved gravitas.

His voice, condensed in range but deepened in intensity, brings added depth to proceedings, his vocal chords kept well lubricated by timely swigs of a medicinal looking liquid that transpired was merely Coca-Cola or, as Fagan puts it “Cuba without the Libre“. It is clear that alcohol has played a destructive role in his life, perhaps accounting for his fall from favour and years spent in the wilderness. But now he has foregone the rum of his Caribbean upbringing, “No more Cuba Libre just music and love“.

And there was much love in the room. Love for the arresting music. Nickels and Dimes bobbed with a decidedly ragtime feel, The Carnival Is Ended bubbled with greater urgency than on record and was performed with a fuller more vibrant sound, while Nothing Is Love was characterised by vibrant Calypso rhythms. Best of the night though was Tenement Hall built around a freer, almost progressive rock sound that gave his excellent band licence to let rip. Mike Hastings coaxed every last squall from his guitar while Alex Neilson behind the drum-kit gave a more than passable impression of a double-jointed octopus, a frenzy of limbs and supple jazz-inflected rhythms.

It is clear that Fagan has much affection for his band, declaring them the best he has ever played with. And it is undeniable that they add a nebulous fluidity and supple subtlety that allow the songs to shine without ever being overshadowed. Much of the musical accompaniment has an airily free-form feel, a jazzy lightness that feels right at home amid the blend of styles that exist on record. Yet this isn’t some soulless reproduction of the album, it’s far from a take the money and get out of here as quickly as possible approach. The songs are consummately arranged with skill and dexterity. Different from the record for sure, but equally compelling. Heaven forbid, maybe even more so.

Ever the showman, there was even time for a Lyndon Johnson impersonation as a prelude to In Your Hands before ending the night with two ‘new’ songs. New, that is, only in the sense that they were from the written-but-unrecorded follow-up to South Atlantic Blues, the rock opera, Soon. The good news is that Fagan and his current band plan to hole themselves up in Glasgow to finally record the album.

If they can inject as much life and soul onto tape as they bring out onstage, it promises to be a cracker. And whatever the wait to hear it performed, we just know it will be worth it.

Opening the proceedings was Entrance, the solo project of Guy Blakeslee, who invoked the spirit of the acid folk revolution of the 1960s with a compellingly short set of psychedelic-tinged folk. Set over an often finger-picked electric guitar, Entrance sparkled with some intricately considered and intensely delivered wordplay.

Promises from his recently released EP was a particular standout, revelling in its own craft and Blakeslee‘s atmospherically constructed soundscapes. Blessed with a rich baritone delivery, it’s his voice that carries and elevates his songs. Deep, rich and sonorous it echoes his forebears, those icons of twisted and skewed American folk who have preceded him. Freed from the restrictions imposed by a conventional stoner-rock psychedelic outfit, Entrance is now free to explore the great American songbook tradition. We’ll look forward to where he travels next. 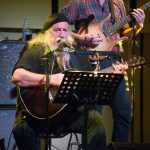 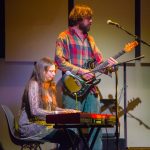 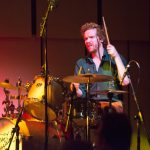 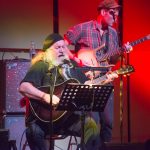 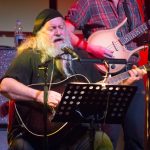 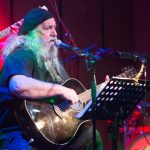 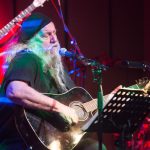 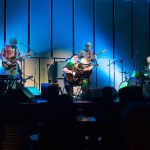 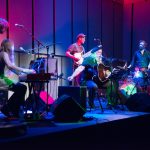 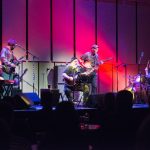 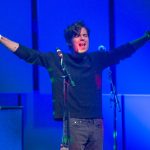 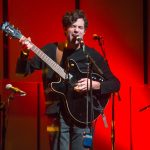